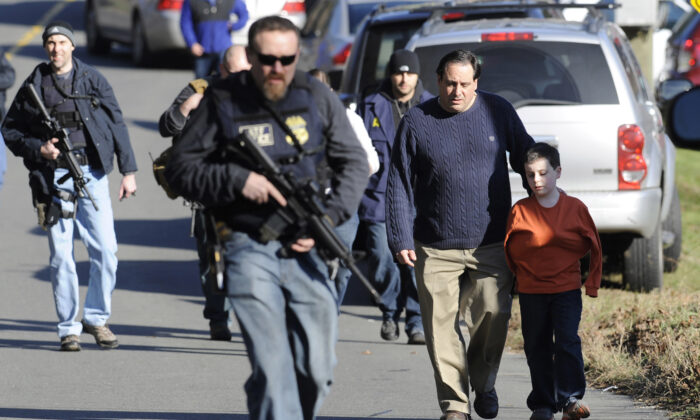 Parents leave a staging area after being reunited with their children following a shooting at the Sandy Hook Elementary School in Newtown, Conn., on Dec. 14, 2012. (Jessica Hill/AP Photo)
By Zachary Stieber

An agreement has “been executed between the parties,” lawyers for the families, who sued Remington in 2015, told the court in a filing.

The agreement wasn’t detailed in court papers, but families and their lawyers said it was for $73 million.

David and Francine Wheeler joined eight other families in the suit against Remington, which marketed and sold the Bushmaster AR-15 style rifle, which authorities say Adam Lanza used to gun down 26 children and adults in the Newtown high school in 2012.

Remington employees knew that selling the rifle and others like it meant “individuals unfit to operate these weapons gain access to them” and that the Bushmaster’s firepower “enables an individual in possession of the weapon to inflict unparalleled civilian carnage,” according to the suit.

“One of the reasons Ben’s not here is because some people made a decision, driven by an increased desire of profits and a fear of a shrinking market share, to focus their advertising on young men, to sell them their product—the most intentionally lethal consumer product our species has ever devised,” David Wheeler told a press conference on Tuesday.

Remington had argued it was immune from claims because of the Lawful Commerce in Arms Act, but ultimately decided to settle to prevent the case from going to trial.

Remington offered a $33 million settlement offer in mid-2021. It wasn’t immediately clear why the final amount was over two times as much. Remington and lawyers representing the company and other defendants did not respond to requests for comment.

As recently as November 2021, Remington entered filings in their defense.

Josh Koskoff, one of the plaintiff’s lawyers, told news outlets in a statement that the large settlement accomplishes the goal of helping prevent “the next Sandy Hook.

“This victory should serve as a wake up call not only to the gun industry, but also the insurance and banking companies that prop it up. For the gun industry, it’s time to stop recklessly marketing all guns to all people for all uses and instead ask how marketing can lower risk rather than court it. For the insurance and banking industries, it’s time to recognize the financial cost of underwriting companies that elevate profit by escalating risk. Our hope is that this victory will be the first boulder in the avalanche that forces that change,” he said.