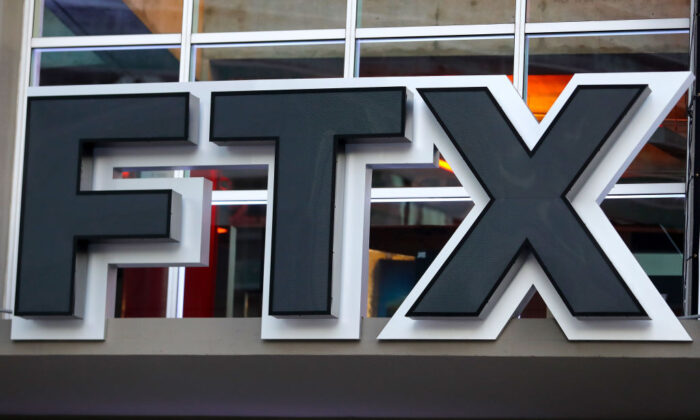 A detailed view of the FTX sign prior to a game between the Phoenix Suns and Miami Heat at FTX Arena in Miami, Fla., on Nov. 14, 2022. (Megan Briggs/Getty Images)
By Michael Washburn

The collapse of cryptocurrency exchange FTX, and the worldwide outcry over the billions of dollars wiped off the platform, are likely to trigger a massive regulatory reaction that would further erode citizens’ economic freedoms without addressing the issues that fostered demand for an alternative to the fiat dollar, economists have told The Epoch Times.

An international scandal has embroiled FTX and its founder, 30-year-old Sam Bankman-Fried, in the wake of the firm’s crash earlier this month precipitated by a run on the exchange. Since then, reports have emerged that Alameda Research, a crypto hedge fund established by Bankman-Fried, was trading billions of dollars from FTX accounts without clients’ knowledge.

FTX has filed for bankruptcy protection, Bankman-Fried has stepped down from his role as CEO, and John J. Ray III, the former CEO of Enron, has taken over the insolvent company with a plan to sell it off if a successful restructuring is impossible. An estimated 1 million customers and other investors are facing total losses of billions of dollars.

Ray has claimed that subsidiaries of FTX in the United States and abroad “have solvent balance sheets, responsible management and valuable franchises,” but so far the shock and alarm over the exchange’s implosion have shown no sign of abating.

Meanwhile, a number of big names in sports and entertainment, such as comedian Larry David, NBA star Stephen Curry, and quarterback Tom Brady, have become the subject of a probe by the Texas State Securities Board over their public endorsements of FTX. The celebrities have also become the targets of class action lawsuits filed by disgruntled investors, with more expected in the days to come.

Observers of the FTX blowup are extremely candid about the severity of the exchange’s mismanagement and the recent historical analogs for its unraveling.

Wayne Davis, a partner at the law firm Tannenbaum Halpern Syracuse & Hirschtritt in New York, drew a parallel with one of the most notorious cases of fraud in the history of finance, that of the Bernard L. Madoff, whose Ponzi scheme bilked some 4,800 clients of $64.8 billion. In both cases, clients were insufficiently attentive to the lack of internal controls, he suggested.

“Madoff comes to mind. Perhaps not the same criminal intent components, but there are certainly similarities as far as investor/customer enthusiasm notwithstanding signs of lax compliance and risk management engagement,” Tannenbaum told The Epoch Times.

Other observers see parallels in earlier events in the development of banking and currencies. Charles Steele, chair of the department of economics, business, and accounting at Hillsdale College in Michigan, said that the blow-up of FTX reminds him of the first stock market bubble and financial crisis to afflict the world, namely the collapse of France’s Banque Royale in 1720.

“Scotsman John Law set up a central bank for the French monarchy that began paying enormous returns on its shares and its sister Mississippi Company. It was heralded as a great triumph of new financial technology, a nearly miraculous breakthrough, but in fact, it was effectively what we now call a Ponzi scheme,” Steele told The Epoch Times.

“In the case of FTX, it appears that Samuel Bankman-Fried was heralded as a crypto genius, but was simply engaged in a lot of shady business disguised as ‘philanthropy,’ using other people’s money. He was apparently the second-largest donor to the Democrat Party campaigns in the 2022 elections, and also was positioning himself to be a major player in the design of federal regulations for cryptocurrency,” Steele added.

The magnitude of the FTX scandal—the amounts of money involved and the number of people suffering possibly permanent financial harm—means that its ramifications are likely to continue to affect all players in the crypto space in coming weeks and months, said Jeffrey Guernsey, a professor of economics at Cedarville University in Ohio. The very lack of a fixed value that made crypto investing exciting for some people may also be among its singular vulnerabilities in the face of emboldened regulators, he suggested.

“While this thought does not originate with me, it is clear that crypto is not a currency, if one attribute of a currency is a stable value. The collapse of FTX certainly puts the entire asset class under review and question and may lead to calls for governmental regulation,” Guernsey said.

Given the priorities of the Biden administration, the notably harsher tone of federal guidance and rulemaking since he took office, and officials’ well-documented hostility to financial innovation and decentralization, the reaction from regulators is likely to be extremely draconian and may even cross lines that the regulators have hitherto respected, observers say. But whether the coming crackdown will address concerns of fiat currency that helped feed demand for alternative exchanges, platforms, and markets is a different question.

“I expect that this debacle will lead to greatly increased federal regulation of cryptocurrencies,” Steele said.

In Steele’s view, the fiasco is likely to speed up the crafting and implementation of central bank digital currencies (CBDC). Steele noted that the Federal Reserve Bank of Boston is collaborating with the Massachusetts Institute of Technology on a joint study, Project Hamilton, whose objective is to devise a CBDC for the United States.

While ignored by many people, this is one of the most potentially concerning recent developments given the unprecedented powers that it stands to place in the hands of a central regulatory authority, he said. While some might initially welcome a CBDC, it could have unforeseen consequences and ultimately could help extend the role of government into people’s lives in ways to which they are so far unaccustomed.

“I think a CBDC is very dangerous, because it would enable a central bank or government to monitor, control, and record every exchange made with the currency. If, for example, a government decided it did not want citizens buying, say, firearms, or perhaps donating funds to a political candidate, the central bank could prevent the transaction. Alternatively, it could have a permanent record of a citizen’s purchases and use these to establish a social credit score for the person,” Steele said.

“In this way, a CBDC could become the ultimate tool of social engineering and tyranny. A true cryptocurrency keeps transactions anonymous, which is one of its great benefits. Governments tend to dislike tools that give citizens such privacy,” he added.

The tragedy of the FTX scandal and the possible meltdown of other crypto entrepreneurs as more and more people panic and seek to redeem their assets is that such platforms arose partly in response to an understandable demand for alternatives to the fiat dollar, or a dollar whose value and use flow from government dictates and are unrelated to any external commodity or asset such as gold. The heavy-handed reaction expected in the coming months as a consequence of FTX’s blow-up is unlikely to take account of this truth.

That’s the view of Brian Domitrovic, a professor of economic history at Sam Houston State University, who sees negative long-term consequences to the country’s abandonment of the gold standard in 1971.

“I don’t think there’s any kind of broad popular support for a fiat dollar, a non-gold dollar. There hasn’t been since 1971. A lot of popular dissatisfaction with this has been very clearly expressed,” Domitrovic told The Epoch Times.

“The Federal Reserve is not a popular institution at all. I think there’s just a general sense on the part of the public that we should have something more like the classical monetary system that we used to have. And I think crypto has tapped into that more effectively than anything since the end of the gold standard,” he added.

From a certain standpoint, cryptocurrencies took over where gold left off following the shift away from the gold standard, Domitrovic said. Like gold, it is limited in supply and requires mining, though of course not the same kind of mining. In the case of the former commodity, the mining is a process of physical extraction of a substance from the earth, and in the latter, it is mathematical and theoretical in nature.

Despite the differences, both currencies have the effect of eroding centralized power and oversight by making institutions such as the Federal Reserve less integral to the functioning of the economy, Domitrovic said.

“Bitcoin aspires to mimic gold in many respects. This is what you had when money was not a creation of the Federal Reserve,” he added.

Much of today’s demand for bitcoin and kindred currencies flow from a widespread desire to go back to how things were before 1971, Domitrovic argued.

“Before 1971, the United States led the world in becoming the greatest economy ever, with hundreds of millions of people living at high levels of prosperity. There is a very strong reason why people associate the pre-1971 period with a magnificent achievement economically,” he added.

In this analysis, the federal government has sought to maintain centralized oversight over the economy and the level of prosperity attainable by citizens partly by not allowing crypto to compete with the fiat dollar.

“Even if there is fraud, I’m still going to lay a lot of the blame at the feet of the government and the official definition of policy, because they’re not taking crypto as seriously as they should. They consider it non-money,” he said.

Domitrovic sees stiff resistance on the part of Washington’s policy elites toward going back to the state of affairs that prevailed up until 1934, when it was common for private banks to issue currencies not subject to taxation.

“A majority of U.S. dollars from 1862 to 1934 were produced privately. Look at currency from the 1920s, there’s the name of a bank on it. It wasn’t taxed, and you didn’t have to calculate where you acquired it and where you sold it. That’s the way things worked going back to 1792 when the U.S. dollar was established,” Domitrovic said.

By taxing crypto transactions and refusing to acknowledge the legitimacy of bitcoin, the government has helped foster a shadow industry where reckless players and fraudsters like Bankman-Fried proliferate, Domitrovic believes.

“I can see scenarios where the government wants to see if bitcoin will embarrass itself out of existence. But they’re not addressing the fundamental issue, that there’s mass dissatisfaction with the non-gold fiat collar. Good policy would take that seriously,” said Domitrovic.

The Epoch Times has reached out to FTX for comment.