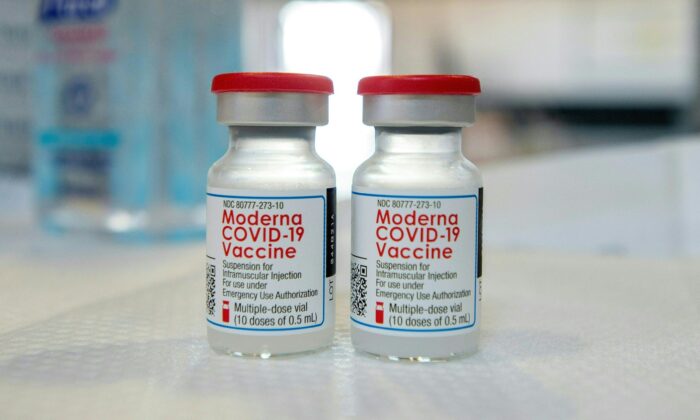 Vials of Moderna's COVID-19 vaccine are seen in Bridgeport, Conn., in a file photograph. (Joseph Prezioso/AFP via Getty Images)
Europe

Europe’s drug regulator on Thursday confirmed it is investigating reports of a blood condition in recipients of Moderna’s mRNA COVID-19 vaccine.

According to a bulletin posted by the European Medicines Agency (EMA), it is reviewing six cases of capillary leak syndrome, considered a “very rare disorder,” after they were reported in the EMA’s EudraVigilance database.

“At this stage, it is not yet clear whether there is a causal association between vaccination and the reports of capillary leak syndrome,” the EMA wrote on Thursday, adding that “these reports point to a safety signal … information on new, or changes in, adverse events that may potentially be associated with a medicine or vaccine and that warrant further investigation.”

The review also will address the risk of capillary leak syndrome in groups who have a medical history of the disorder.

As a result, EMA researchers will “evaluate all the available data to decide if a causal relationship is considered likely or not,” the bulletin reads.

It also noted there is “currently insufficient evidence” of a link between Moderna’s vaccine and cases of multisystem inflammatory syndrome.

Capillary leak syndrome, according to the Mayo Clinic, is a rare disorder involving repeated leaks of large amounts of plasma from blood vessels into nearby body cavities and muscles. The condition—known as Clarkson’s disease—can result in a sharp drop in blood pressure that can lead to organ failure or even death.

“Attacks may be triggered by an upper respiratory infection or intense physical exertion. The frequency of attacks can range from several a year to a single instance in a lifetime,” says the clinic.

Earlier in the year, the EMA’s safety committee concluded that capillary leak syndrome should be added to the product information as a side effect of AstraZeneca’s vaccine, which uses different technology than Moderna’s.

Outside of the European Union, Canada’s health agency earlier this year updated the label for the Oxford-AstraZeneca and Covishield COVID-19 vaccines to add capillary leak syndrome as a possible side-effect. The Canadian agency included a warning for individuals with a history of the ailment to not receive those vaccines.

“Like all medicines,” the EMA said on Thursday, “this vaccine can cause side effects, although not everybody will experience them. The most common side effects known for [Moderna’s vaccine] are usually mild or moderate and get better within a few days after vaccination.”

Moderna this week confirmed it is seeking to expand the conditional license for its COVID-19 vaccine in the European Union to include children between the ages of 6 and 11.

Moderna has not responded to several requests for comment.