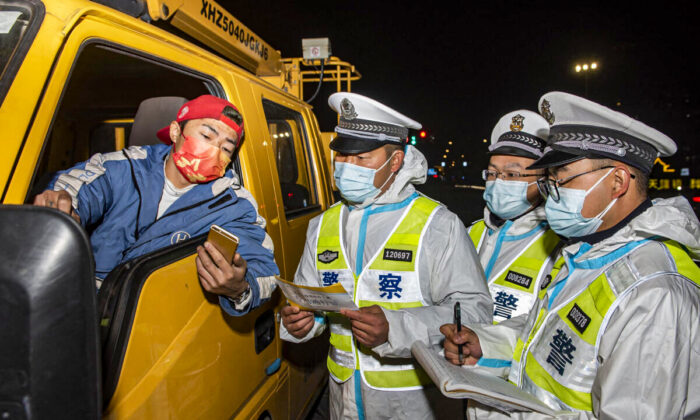 Police officers are checking information with a truck driver (L) at a checkpoint in Ningbo, Zhejiang Province, China, on Dec. 18, 2021. (STR/AFP via Getty Images)
By Alex Wu

China’s ruling communist party has warned local authorities in its latest COVID-19 control notice that anyone infected with COVID-19 crossing the border into China will face the death penalty.

On June 2, nine governmental bodies of Fangchenggang city in China’s southwestern province of Guangxi jointly issued the official epidemic control notice on their Chinese social media accounts. Those bodies include the Municipal Commission for Discipline Inspection, the Public Security Bureau, and the Dongxing Customs Anti-Smuggling Branch.

Article 6 in the notice states that anyone infected with COVID-19 or those who help infected individuals cross the border without permission will be charged with endangering public safety, which is punishable by death, fines, and the confiscation of property.

The policy was met with outrage on social media, and the notice was subsequently deleted from the official accounts of local authorities on June 3. Netizens questioned the appropriateness of the death penalty and whether local governments have the right to convict and sentence someone to death.

One post read, “Is there any legal basis for it?”

Another person said in a post, “They need to understand the law in the first place. The power to determine death penalty is in the Supreme Court, not in a local small town’s government.”

A third person wrote, “In fact, the epidemic is not scary at all, but people’s hearts are much more scary.”

This isn’t the first time that the Chinese Communist Party’s (CCP) penalties against citizens who violate its COVID-19 regulations have caused wide criticism. Last December in Baise, another city in Guangxi Province that borders Vietnam, authorities paraded around four residents who had allegedly violated local COVID-19 restrictions for public humiliation, hanging placards around their necks displaying their photos and names, just as the CCP did in the Cultural Revolution.

Each resident was held by two police officers and guided through the streets full of people and surrounded by armed riot police. The videos and photos of the shaming parade were posted online and attracted wide attention and criticism.

Since the outbreak of COVID-19, the CCP has adopted various extreme virus prevention and control measures, such as citywide mass lockdowns, suspension of medical services, sticking seals on the doors of residences of COVID-19 patients, and welding doors of residential buildings shut where COVID-19 cases are found, among others. The measures have caused many tragedies and much human suffering, triggering increasing public anger.

In May, in Beijing, citizens were required by authorities to show a negative nucleic acid test certificate from within the previous 48 hours in order to use public restrooms. Brave netizens online said the country’s epidemic control measures had reached an absurd level.