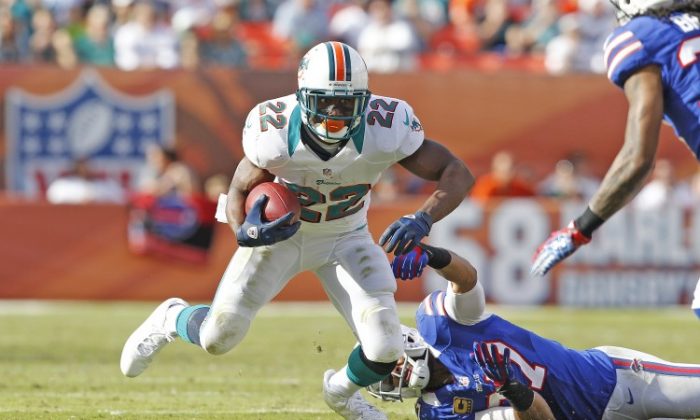 Reggie Bush #22 of the Miami Dolphins runs with the ball against the Buffalo Bills on Dec. 23, 2012. (Joel Auerbach/Getty Images)
NFL

Reggie Bush: Rumors Say He Might go to Lions

Reggie Bush rumors: There have been rumors and reports saying Reggie Bush will be going to the Detroit Lions.

Free agent running back Reggie Bush might be going to the Detroit Lions, according to reports.

Bush, along with safety Glover Quinn, were in Detroit on Wednesday to visit with the Lions, a team in dire need of depth at running back, according to the Detroit Free Press.

“We’re going to sit down and hash it out with my agent before making any decision,” Bush said, according to the newspaper. “I’ll meet with the coaches, and we’ll go through the whole process with any team. It definitely does matter where I’ll end up. I don’t want to go anywhere blind. I want to know what I’m getting into and check out the facilities and see how I’ll be used.”

There have been reports that the Arizona Cardinals and the Cincinnati Bengals are looking to acquire him, but The Washington Post reported Wednesday that the Washington Redskins have expressed “some interest” in Bush, citing a source familiar with the matter.

Yahoo Sports reporter Jason Cole said on Tuesday that the Lions promised Bush that if he were to sign, he would be an every-down running back, getting more playing time than Mikel Leshoure and Joique Bell.

“Reggie has a tough decision to go through,” a source close to Bush told Cole. “He’s very careful about how he considers these situations. He asks a lot of questions and wants to know all the ins and outs about how a team wants to use him. But, you know, in his heart, he wants to play all the time.”