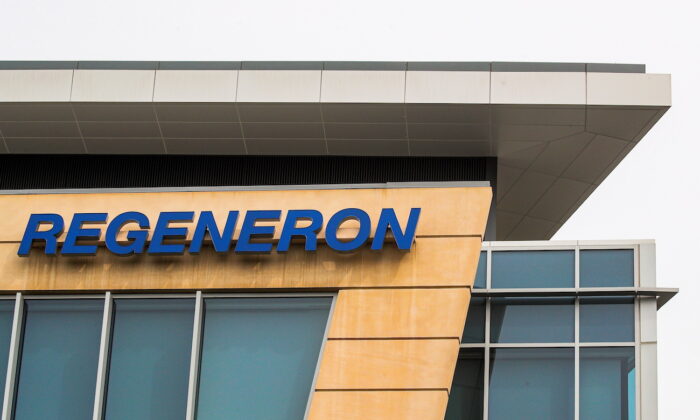 The Regeneron Pharmaceuticals company logo is seen on a building at the company's Westchester campus in Tarrytown, New York, on Sept. 17, 2020. (Brendan McDermid/Reuters)
Vaccines & Safety

Regeneron said on Nov. 30 that its COVID-19 antibody drug cocktail could lose effectiveness against Omicron, providing further indication that the arsenal of medical products developed to fight the disease may need modification to be effective against the new strain.

The drugmaker said in a statement (pdf) that early tests show that the high number of mutations in Omicron indicate that “there may be reduced neutralization activity of both vaccine-induced and monoclonal antibody conveyed immunity.”

Regeneron President and Chief Scientific Officer, George Yancopoulos, told The Wall Street Journal that the full picture of the efficacy of the company’s antibody treatment against the new variant will only be known in several weeks, after more tests.

It comes as researchers have raised doubts about the efficacy of COVID-19 therapeutics and vaccines that target the virus’ spike protein, as Regeneron’s product does, since Omicron has been found to have multiple mutations of the spike protein.

BioNTech said Friday it may know within two weeks if the vaccine it developed with Pfizer needs to be reworked. Moderna CEO Stéphane Bancel told the Financial Times in an interview published Tuesday that he predicts current COVID-19 vaccines will be far less effective against Omicron.

“There is no world, I think, where [the effectiveness] is the same level … we had with Delta,” Bancel told the Financial Times. “I think it’s going to be a material drop. I just don’t know how much because we need to wait for the data. But all the scientists I’ve talked to … are like ‘this is not going to be good.’”

Bancel said that the high number of mutations on the protein spike that the virus uses to infect human cells suggests it’s likely the current crop of vaccines would need to be modified.

He added that he believes it could be months before pharmaceutical companies can manufacture vaccines at scale to combat Omicron.

The World Health Organization (WHO) named the Omicron strain, which was discovered in South Africa less than a week ago, as a “variant of concern” (VOC) on Nov. 26, sparking travel bans to several African nations.

On Monday, the WHO posted a technical brief on Omicron, saying it is likely to spread internationally, posing a “very high” global risk of infection surges that could have “severe consequences” in some areas.

“Omicron has an unprecedented number of spike mutations, some of which are concerning for their potential impact on the trajectory of the pandemic,” the WHO said.

“The overall global risk related to the new VOC Omicron is assessed as very high,” the agency added.

The agency added that, while there have been no reported deaths linked to Omicron to date, more research is needed to assess the variant’s potential to escape protection against immunity induced by vaccines and previous infections.

While Omicron was already as far afield as Canada and Australia, a South African doctor who had treated cases said symptoms of the virus were so far mild.