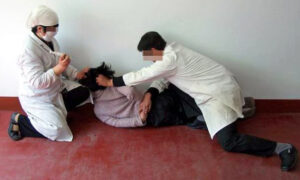 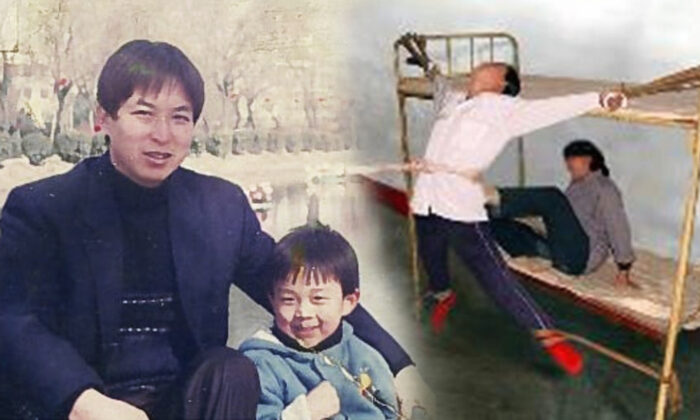 Refugee Son Exposes Persecution of Father in China: ‘The Communist Party Is Evil’

A young Chinese refugee in Australia, who fled the communist country with his mother in 2012, hopes that one day they will reunite with his father who has been severely persecuted in China for his faith.

Eric Jia, originally from Shaanxi Province, China, was just 11 years old when he last saw his father, Ye Jia, in the year 2011.

“He was still in prison,” Eric, 22, told The Epoch Times. “All I knew at that time was, my family was imprisoned for doing nothing wrong, and that the Chinese police is evil, the communist party is evil, but there is nothing I can do.”

Although Eric can’t remember his father’s voice now, the memory of Ye’s reassuring smile still strengthens his resolve to seek truth and justice.

Ye, 58, has been unlawfully detained several times in the past two decades for refusing to give up his faith in the values of “Truthfulness, Compassion, and Tolerance,” the three core teachings of Falun Gong (also known as Falun Dafa)—a self-improvement cultivation system that has been brutally persecuted by the Chinese Communist Party (CCP) since July 1999.

Ye, who worked at the Hu County Power Plant, Xi’an City, not only lost his job but also faced harrowing torture at the hands of the communist regime. Ye’s courage to confront the suppression only escalated his persecution; he was forced into homelessness for six long years, enduring the agony of being separated from his family and his little son.

From Freedom to Persecution

During the early 1990s, Ye and his wife, Chunli Liu, witnessed firsthand the healing power of Falun Gong. Eric’s grandmother was plagued by various health issues in 1996 and learned the gentle exercises of Falun Gong from her friend.

“My grandmother had many illnesses, including Emphysema, tracheitis, heart disease and the worst was her uterine fibroids,” Eric said. “After she started practicing, her uterine fibroids magically disappeared in three months. All illnesses she had were eventually gone with the practice of Falun Gong.”

Ye, who was always interested in Qigong (ancient Chinese energy and healing exercises), began learning Falun Gong after seeing positive changes in his mother’s health. According to his son Eric, it wasn’t long before Ye began to experience health improvements himself. “My dad’s immunity was weak before practicing Falun Gong. After he took up the practice, he became healthy,” Eric said.

Chunli, who owned a shop in China, experienced improvements in the way she handled her business deals. She said her entire family became harmonious and peaceful, and they “smiled a lot more.” Their family were among the hundreds of thousands of Falun Gong adherents in China who experienced the physical and mental benefits of the practice.

By the late 1990s, according to state estimates, 70 to 100 million people were practicing Falun Gong. Fearing its popularity as a threat to the CCP’s iron-fist reign, former leader of the CCP Jiang Zemin initiated a genocidal campaign against Falun Gong, arresting and detaining countless practitioners as “state enemies.”

In hopes to appeal to the communist officials to restore the freedom to practice their faith, Ye, like many other adherents, went to Tiananmen Square (or the Gate of Heavenly Peace) in Beijing in April 2000. However, he was “identified and arrested,” and the Beijing police then contacted the local law enforcement in Ye’s hometown.

“He was brought back and was sentenced at ‘Hu County (Drug) Addiction Treatment Center’ for one month. The police even charged us 2,000 yuan (approx. US$300) for petrol,” Eric said.

In September 2001, Ye was again arrested and taken to Hu County Detention Center, Xi’an City, for a year and two months. Eric, who was a toddler back then, remembers that his family were continuously harassed by the police.

To avoid persecution, Ye was forced into homelessness for six long years.

During the 2008 Beijing Olympics, the CCP began mass-arresting Falun Gong adherents and other religious and political dissidents. Ye was among those who were arrested on June 4, 2008.

Ye was later sentenced to eight years in Wei Nan Prison, Weinan City, in September that year. During his incarceration, Ye faced unimaginable abuses, causing his health to deteriorate. For as long as half a month, he was locked to a bunk bed and handcuffed for more than 12 hours a day. Due to the severe torture, he lost weight, suffered from hemoptysis, black sputum, and liver pain.

Eric said that his father was put under solitary confinement. “He was locked in a small room for 6 years, with 2 to 3 prison guards watching him every day,” he said.

Eric said that when his dad went homeless in 2003, his hair was all black. But when he and his mother visited Ye in prison around the beginning of 2009, his hair was “almost all white.” Eric recalled that when his grandmother met his dad in jail on Sept. 8, 2013, she was “shocked.”

“My father’s face was very pale, white, and he looked very weak. She asked him what happened. That is when we got to know that he was locked in an isolation room all the time,” Eric said.

‘We Can Be Ourselves Again’

On Jan. 10, 2012, Eric and his mother reached Australia. Living in a free country, Eric said, “The biggest change for us, was that we could be who we are.”

Eric, a university student, said that in China, his family were not only at risk of being arrested at any time, but also faced continuous monitoring by their neighbors who were brainwashed by the CCP propaganda against Falun Gong.

“After arriving in Australia, the worry of being in danger and discriminated for our beliefs has completely disappeared. We can be ourselves again,” he said.

The young man is now resolutely raising awareness of his father’s plight. He had shared his family’s story with local media and written letters to government officials, including former Prime Minister Malcolm Bligh Turnbull and foreign ministers.

“While I did not go through much emotional pain since I was too young. My mother certainly has had to deal with a lot of pressure, fear, hopelessness, and discrimination to raise me up and take care of the rest of our family members,” he said.

Eric’s father was released from Wei Nan prison on July 23, 2016, after eight years. After his release, Ye tried living a normal life and finding a job. However not long after, in 2017, he was arrested and taken to Ba Qiao brainwashing center in Xin He district, Xi’an city. Eric’s grandmother, then 73, and older aunt, Chunxia Liu, were arrested in the same year too.

To expose the injustice forced upon his family, Eric, his mother, and younger aunt stood outside the Australian parliament, holding signs that read, “Please help rescue my family.” Fortunately, their peaceful appeal caught the attention of the Australian Greens senator for Victoria, Janet Rice, who stopped by to know more about the unlawful imprisonment of his family members.

Moved by what she heard, Rice wrote a letter to the Mayor of Xi’an city, to “immediately and unconditionally release Ye Jia and Chunxia Liu,” reported Minghui.org.

Senator Rice said in her 2017 letter: “I am informed that they have been detained solely for exercising the right to freedom of belief and expression. Pending their release, please ensure that they have regular and unrestricted access to their family and lawyers.”

After the letter, Ye Jia was released on Dec. 21 that year and Chunxia was tried on Dec. 26, but no adjudication was given; she was later sentenced to four years in prison in January 2018.

However, Eric told The Epoch Times that Chunxia was released from prison in late March this year.

Eric said that his family members had faced abuses that are hard to describe. He said his older aunt experienced as much persecution as his father; she was physically tortured, beaten, sleep-deprived, and handcuffed in uncomfortable positions.

“Even my grandmother, who turns 76 years old this year, has been through nearly 2 years of prison term. She was also physically tortured, shocked with an electric baton, not allowed to sleep or eat and drink for 3 days, and beaten,” he said.

“I am saying this only to point out how severe the persecution is in China—how much one family alone is made to suffer. I want people to know how the CCP treats good people, people of faith.”

Despite all the pain and suffering, the family remain hopeful.

“There is nothing wrong with being a good person,” Eric’s mother said. “I believe a good person will have a good fate. Goodwill always prevails—it does not matter how many hardships might be in the way.”