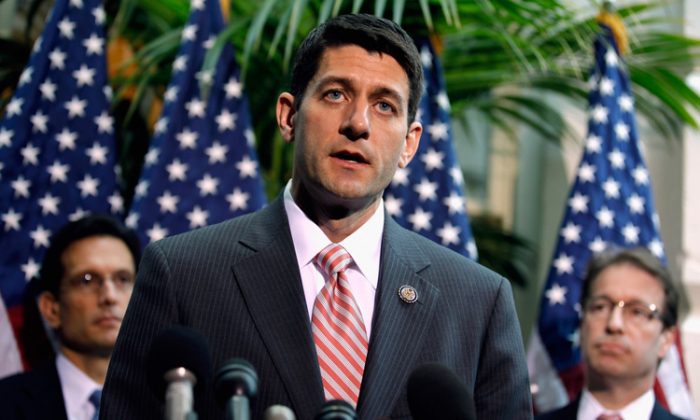 House Budget Committee Chairman Paul Ryan (R-Wis.) joins other members of the House GOP leadership who were available for the media after a Republican Conference meeting at the U.S. Capitol March 27. On March 21, the U.S. House of Representatives Committee on the Budget voted in favor of reducing government spending, shrinking the ever growing U.S. government debt burden, and confronting entitlement costs. (Chip Somodevilla/Getty Images)
US

As of noon on March 22, the U.S. national debt, which is the total debt owed by the federal government, reached close to $15.57 trillion, the U.S. total debt was $57.17 trillion, and the U.S. federal budget deficit was at $1.32 trillion, according to the U.S. Debt Clock.org chart. With the U.S. debt clock ticking, the U.S. Congress and all legislative powers are searching for ways to stop the ever increasing U.S. debt and reduce it to manageable levels.

On March 21, the U.S. House of Representatives Committee on the Budget voted in favor of reducing government spending, shrinking the ever growing U.S government debt burden, and confronting entitlement costs with its FY2013 Path to Prosperity resolution. The resolution will be brought before the House floor during the last week of March.

“The Path to Prosperity budget tackles our generation’s greatest domestic challenge: reforming and modernizing government to prevent an explosion of debt from crippling our nation,” said Rep. Paul Ryan, House Budget Committee Chairman, in a statement.

“The budget proposal Rep. Paul Ryan released yesterday is, essentially, an effort to have low- and middle-class households bear the entire burden of closing the fiscal gap and to have them bear the costs of financing an additional tax cut for high income households,” according to a March 21 article on The Brookings Institution website.

The Brookings analysis suggests that although Ryan’s proposal appears on the surface to tackle issues such as the elimination of tax breaks, it doesn’t break them down to specific tax breaks.

“Until he specifies which popular tax breaks he would eliminate, the Republican’s budget is clearly a win for the rich and a loss for everyone else. … Rep. Ryan is gaming the system in creating budget estimates. Ryan’s budget proposal is too vague to be scored,” the Brookings article suggests.

An article on the Center for American Progress website suggests that Ryan’s proposal calls for lowering the tax rate for the richest Americans and corporations to 25 percent, thereby reducing the U.S. government’s revenue potential by more than $1 trillion. The proposal appears to call for almost $5 trillion in tax reductions for America’s upper echelon, according to the article, instead of addressing needed cost reductions.

“In fact, with all the House budget’s tax cuts properly accounted for, revenue would average just 15.3 percent of GDP from 2013 through 2022, not 18.3 percent. The result: deficits would never drop below 4.4 percent of GDP, and would rise to more than 5 percent of GDP by 2022,” the American Progress article stated.

While the aforementioned articles tear apart Rep. Ryan’s proposal, another Brookings article advocates that the Ryan proposal has merit.

“Yes, like all budget plans, the Ryan FY ’13 budget is flawed. It is not the means by which I expect to see the fiscal crisis resolved. But it is one way to do the job, and it looks better every day that [it] is unchallenged by a comprehensive plan from its critics,” the March 22 Brookings article suggests.

Both Brookings articles discount President Barack Obama’s cost reduction proposals in his 2013 budget plan. An article on the Seeking Alpha website thinks just the opposite. But, the clincher is that this proponent of the present administration’s cost and deficit reduction plan cynically states that the sitting administration lacks enforcement power.

“I have absolutely no confidence in the ability of Mr. Obama to lead in this area and so I would argue that this proposal is DOA,” the Seeking Alpha article stated.

“We identified 51 areas in our 2012 annual report, including 32 areas of potential duplication, overlap, or fragmentation as well as 19 opportunities for agencies or Congress to consider taking action that could either reduce the cost of government operations or enhance revenue collections for the Treasury,” according to testimony by the U.S. Government Accountability Office (GAO) before the U.S. Committee on Oversight and Government Reform on Feb. 28.

The 426-page GAO report goes into great detail and names a number of agencies, including agriculture, defense, and international affairs, where clear-cut overlap, replication, and fragmentation of services exist, either within or between agencies.

The GAO found governmental cost savings in the billions for the programs under review, not including the many other programs that were not assessed at this time.

A total of 21 programs were documented in the report, according to an Office of Management and Budget (OMB) blog. OMB, on behalf of the White House, suggests that given that the 2013 budget was not released until after Feb. 28, the report was not taking into account one-fourth of the reforms outlined in that budget.

Citizens Against Government Waste (CAGW), America’s taxpayer watchdog, has been telling America for 27 years that the many duplicate and overlapping programs in the government sector should be consolidated.

In its February announcement, the CAGW said that according to the GAO 2012 report, there are “hundreds of agencies, offices, and initiatives that provide similar or identical services to the same populations, including 53 programs across four departments that focus on supporting entrepreneurs; 50 programs across 20 federal agencies promoting financial literacy; and 14 programs across three departments for the administration of grants and loans to reduce diesel emissions.”

On March 15, the World Economic Forum (WEF) announced that a government could save billions of dollars if it buys into mobile financial services, according to its report “Galvanizing Support: The Role of Government in Advancing Adoption of Mobile Financial Services,” released this year.

“Governments throughout the developing world can use mobile financial services not only to advance financial inclusion, but also to deliver significant efficiencies and cost savings,” according to a WEF March 15 press release.

“Mobile financial services enable people and businesses to deposit and withdraw funds and make electronic payments without the need for traditional bank branches,” according to the WEF report.

But, why would the mobile financial services be a cost savings tool and instrumental in reducing budget deficits in the developing world?

The report suggests that government social services programs that provide funds for the millions of poor people or retirees, as well as tax offices, could pay and receive funds through mobile financial services, instead of laboriously preparing mail, sending out checks, keeping a tally, and so on.

“For governments … distributing disbursements in cash is extremely costly. To address these problems, a number of payroll disbursement solutions have been introduced, but to date none have been able to effectively tackle both remote salary/commission disbursement and cash elimination,” the report advises.