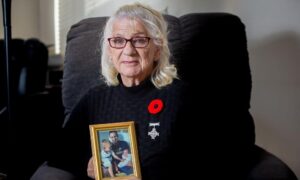 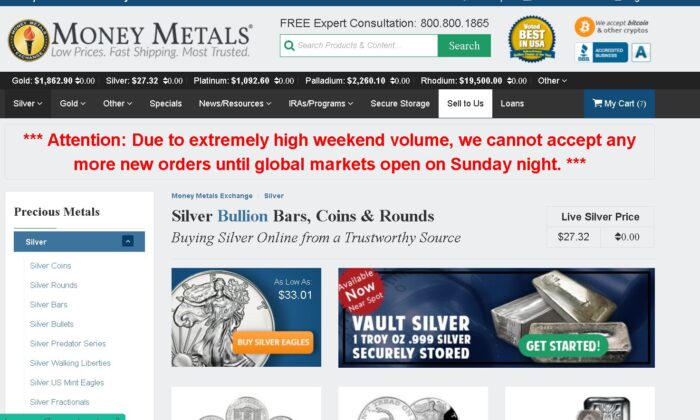 A screenshot taken of the Moneymetals.com website on Jan. 31, 2021. (Screenshot/The Epoch Times)
US News

Several major dealers of silver, gold, and other precious metals say they’re encountering shortages of silver, in particular, after some Reddit users in the popular forum WallStreetBets called for users to create a run on the precious metal.

Later, top users on the Reddit WallStreetBets forum called on others not to purchase silver stocks, or SLV, saying that it could benefit Citadel LLC, while calling on others to purchase and hold GameStop and similar stocks like AMC.

On Sunday, Bullion dealers wrote on their respective websites about shortages of physical coins.

APMEX wrote that “due to unprecedented demand on physical silver products, we are unable to accept any additional orders until markets open on [Jan. 31] evening.”

JM Bullion, another major bullion dealer, wrote that due to an increase in demand, there will be shipping delays of five to 10 days “from cleared payment.”

Next was SDBullion, which said on Jan. 31 that it couldn’t fulfill any additional orders until the market opened.

“In the 24 hours proceeding Friday market close, SD Bullion sold nearly 10x the number of silver ounces that we normally would sell in an entire weekend leading to Sunday market open,” SDBullion CEO Tyler Wall wrote on the company’s website on the morning of Jan. 31.

A number of popular 1-ounce silver rounds were out of stock on the four aforementioned websites and others.

“In a normal market, we normally can find at least one supplier/source willing to sell some ounces over the weekend if we exceed our long position (the number of ounces we predict we will sell over the weekend). However, everyone we talk to is afraid of a gap up at Sunday night market open,” Wall said.

“This is about ready to get really interesting, as there was very little inventory left from suppliers/mints going into Friday close. Our direct [silver] supplier informed us after the close on Friday that the ‘US Mint will be on allocation for the remainder of Type 1’ (Current Silver Eagle Design). Our sales for the month of January exceeded any one-month last year.”

The silver run was coordinated via users on WallStreetBets, 4chan’s /biz/ board, Twitter, and other websites over the weekend.

On WallStreetBets, one user wrote in a highly upvoted post that they wanted to push up the price for an ounce of silver from around $25 to $1,000 in what they described as the “biggest short squeeze in the world.” The post was later deleted by moderators.