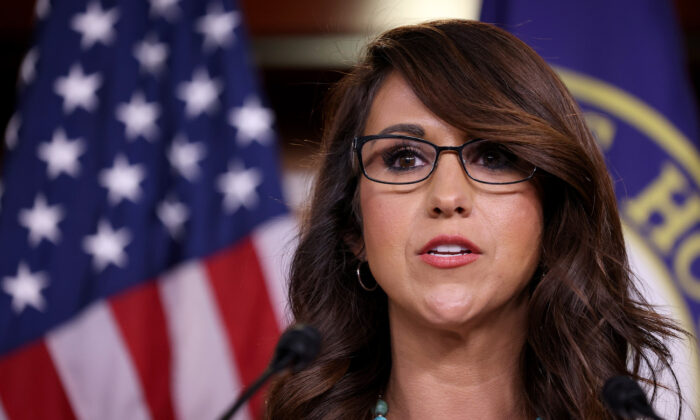 Rep. Lauren Boebert (R-Colo.) speaks during a press conference at the U.S. Capitol in Washington, on June 23, 2021. (Win McNamee/Getty Images)
By Zachary Stieber

A recount has been ordered in the tight race between Rep. Lauren Boebert (R-Colo.) and her Democratic challenger.

Colorado Secretary of State Jena Griswold, a Democrat, ordered the recount because of the slim margin of victory—0.16 percent—after the votes were counted.

Colorado law mandates a recount if a race is within 0.5 percent.

The 27 counties within Colorado’s 3rd Congressional District, which Boebert has represented since 2021, were alerted to the order and directed to complete a recount by Dec. 13.

“The results of the District 3 race reinforce the fact that every vote matters,” Griswold said in a statement. “Colorado voters have made their voices heard, and I am ordering this recount in accordance with Colorado law to confirm the will of the voters.”

The unofficial results prior to the recount show Boebert with 163,842 votes, 550 more than Adam Frisch.

Counties have been directed to work with canvass boards to test tabulation equipment. After the tests, counties will recount all ballots for the 3rd District race the same way they were counted during the election. Every county will use the tabulators, according to Griswold’s office, except for San Juan County. Officials there will manually recount the ballots.

“Adam Frisch called me to concede this race. I look forward to getting past election season and focusing on conservative governance in the House majority. Time to get to work!” Boebert wrote in a Nov. 18 tweet.

Frisch said he decided to concede because he didn’t want to give supporters false hope.

“This is an automatic recount written into Colorado [statute]. Colorado elections are rock solid and if historical precedent of recounts in the state holds, it is unlikely to change more than a handful of votes,” he wrote on Twitter on Nov. 18.

“This campaign has never been about false hope. We ran knowing we could win. And we came close, so close. So rather than continue with a narrative that the recount could alter the fact that we came up 554 votes short, we are choosing to move forward with honesty & humility.”

Republicans came into the midterms as the minority in the House but flipped enough seats to wrest control from Democrats.

Once new members are sworn in shortly after the New Year, Republicans will take over the House.

Republicans currently have secured 220 House seats in the next Congress, with two races—including the Colorado race—uncalled. A majority requires 218 or more.

The Republican candidate in the other uncalled race is also ahead.

Republican candidate John Duarte, a farmer and businessman seeking office for the first time, was ahead by 499 votes as of Nov. 30. Democrat Adam Gray, a state assemblyman, was vying with Duarte for the seat representing California’s 13th Congressional District.

Some precincts are still counting votes.

Duarte told the Modesto Bee that he believes he’ll end up the winner.

“I am honored to be able to go in and fight for the 13th District,” Duarte said.

A slim majority in the next Congress gives Republicans subpoena power. Democrats will still hold the Senate and White House.

Boebert was a Second Amendment activist and owner of Shooter’s Grill, where staffers open-carried guns, when she decided to run for office.

Boebert beat Scott Tipton, the Republican incumbent at the time, in a primary in 2020 by nearly 10,000 votes. In the general election, Boebert trumped Democrat Diane Mitsch Busch by more than 26,000 votes.

Boebert has opposed legislation that would curb gun rights and is largely aligned on policies with former President Donald Trump, about whom she regularly speaks favorably.

Frisch said he challenged Boebert because he thinks she’s extreme. He campaigned as a moderate.

Frisch barely survived the Democrat primary, winning by 290 votes. Boebert received 64 percent of the vote in the Republican primary.

As the recount was announced, Boebert was elected to serve on the Republican Policy Committee for the next Congress.

The committee advises Republicans in the House on legislative proposals and reports.

“I am honored to be elected to serve on the Republican Policy Committee. I am committed to delivering on the conservative policies we promised the American people. I have a unique opportunity to be a voice for four states, all of whom share Western Conservative values. Being their advocate is a responsibility that I take seriously. I look forward to working with all the Members of the Republican Policy Committee and our colleagues to deliver real solutions,” Boebert said in a Nov. 30 statement.

Rep. Gary Palmer (R-Ala.), chairman of the committee, said, “Congresswoman Boebert will play an important role in promoting effective policies that benefit all Americans. Her focus on action and desire for results will be valuable assets on our team as we work to provide sound ideas for the Republican Conference to support.”