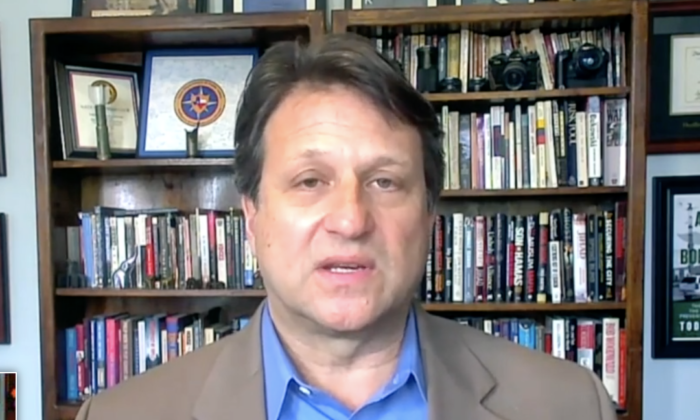 With U.S. intelligence officials estimating a massive increase in the number of illegal immigrants inundating illegal entry points at the southern border, Todd Bensman of the Center for Immigration Studies (CIS) in Washington said many who have been temporarily held off in Mexico will flood the border after Title 42 ends.

“Now you have Title 42 people coming in, who are just saying, ‘I’m coming to wait for the magic day,’” Bensman, senior national security fellow at CIS, told EpochTV’s “Facts Matter.”

Exclusive: Secret Deal Between US, Mexico Led to an ‘Ant Operation’ of 70,000 Illegal Aliens

Title 42 is a Centers for Disease Control and Prevention order that was invoked in March 2020 under President Donald Trump to minimize the spread of COVID-19 by ensuring that only essential travel occurred at U.S. borders. It directed that illegal immigrants could be quickly expelled back into Mexico as a pandemic precaution. It is slated to end on May 23.

During the Trump presidency, “everybody [who] gets caught crossing the border goes back immediately to Mexico. That drove the numbers down to kind of historic low levels,” Bensman said.

He said that although Biden was forced to keep Title 42, he carved out “huge exemptions in it for family groups and unaccompanied minors, that … created the mass migration crisis that we have today.”

With the Biden carve-outs, record numbers of illegal immigrants are entering the United States, but intelligence officials are predicting that after Title 42 is lifted, between 12,000 and 18,000 illegal immigrants will flood the southern border each day.

“That’s on the outer limits of the estimates, [which] are coming from the American intelligence community. … This is what they’re expecting,” Bensman said. “They’re saying it could be as low as 12,000 a day. But to give you some context, we’re at [6,000] and 7,000 a day right now, which is just too big to handle at present.”

“They’re bringing in fleets of aircraft to be able to quickly move people off the riverbanks into other places, other cities, other towns. They’re doing expansions of existing facilities, like kind of soft-sided tent-like facilities. They’re probably going to be bringing in the army to help with crowd control. And they’re working closely with the Mexicans to see if the Mexicans can control things on their side,” Bensman said.

He said of how the country’s migrant advocate-driven asylum system currently functions, “All you have to do is cross, say ‘I declare asylum,’ and you have this off-ramp into the American interior, pretty much forever. … [The migrant advocacy industry] want this to be available to everybody.”

CIS estimates that the Biden administration has helped 1.3 million illegal immigrants resettle in the United States during President Joe Biden’s term with an honor system for court dates or notices to appear later to have their asylum cases adjudicated.

Bensman said Biden has all but abolished the Immigration and Customs Enforcement agency and almost no deportations are being conducted, which won’t change until another administration comes in. Noting that even if someone is a terrorist or murderer, it would still take a long process for that person to be deported.

“The state of Texas has this muscle that they’ve never used, that I don’t think anybody’s even thought to use before, which is to put its vehicle inspection officers at the bridges—more of them—and to ‘inspect’ every single truck coming off of these bridges with freight,” Bensman said.

This action forced Mexican governors to do immigration control on their side, he said. Four governors signed immigration deals with Texas to hold back immigrants as long as trucks can pass through entry points efficiently. Texas Gov. Greg Abbott has said if the immigration deals aren’t enforced, he’ll put the inspection patrols back.

“These cause a huge amount of pain on both sides actually, a lot of Texans are feeling that pain: businesses, a lot of Abbott’s constituents. It’s politically risky, but it shows the desperation of Texas about Title 42 and what’s about to happen, to do whatever, pull out whatever stops,” Bensman said.

Bensman said this type of diplomacy around immigration is really the job of the federal government, but seeing that nothing was happening, Abbott bypassed the Biden administration.

“This is something that the Biden administration should have done,” Bensman said. “Trump did this type of thing. He threatened economic pain if the Mexicans didn’t go along with his plan. And it worked when he did it.”

He said if he was put in charge of the crisis at the southern border, he would overhaul the asylum law: “Just take it off the table and come up with something else. It’s going to take bipartisan support. And in the meantime, we need to leverage Costa Rica, Colombia, and Panama to shut their borders down.”