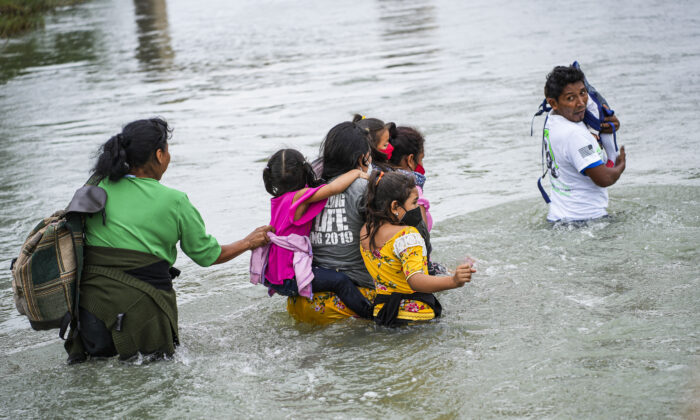 The Rio Grande Valley in Texas and the Tucson Sector in Arizona have traditionally been the most deadly border sectors, as the river and the summer heat claim the most lives. Smugglers leave injured and sick immigrants to die.

But Texas’s Del Rio sector, which includes Eagle Pass, bore the brunt of the deaths last year with 255 recorded. Most of the deaths in this area were due to drowning in the deceptively swift Rio Grande. But the total also includes 53 deaths of illegal aliens being smuggled in a locked tractor-trailer unit near San Antonio in June 2022.

Deaths in the Del Rio sector over the past two fiscal years were higher than the previous 15 years combined. The sector also became the epicenter of mass illegal crossings.

The CBP data include a footnote indicating that the “data may be subject to change based on new discoveries of remains and possible dates of death as determined by a medical examiner.”

Not all illegal immigrant deaths are counted in the CBP data, as Border Patrol agents aren’t always involved in the discovery. Sheriff’s offices have their own tally of bodies discovered by ranchers, hunters, or others.

The bodies are often from those walking in remote ranchland to circumvent Border Patrol highway checkpoints, sometimes 60 to 100 miles from the border.

Former CBP Commissioner Mark Morgan said the CBP numbers are the “tip of the iceberg” for illegal immigrant deaths.

“When you increase the number of illegal aliens coming by 500 percent, you’re going to increase all the suffering, tragedies, and inhumane actions associated with that,” Morgan told The Epoch Times on Jan. 19.

The number of illegal crossings has more than tripled since 2020, as has the number of deaths.

Department of Homeland Security Secretary Alejandro Mayorkas has maintained that the border is secure.

“I have been to the border nearly 20 times, and I can attest to the steadfast commitment of the DHS workforce to secure our border, enforce our laws, and build safe, orderly, and humane immigration processes under extremely difficult conditions,” Mayorkas said in a Jan. 5 press conference.

“Let me be clear: Title 42 or not, the border is not open,” Mayorkas said, referring to the public health order that allows Border Patrol agents to quickly expel some illegal aliens back to Mexico.

CBP declined to provide a comment to The Epoch Times on the increase in deaths.

In south Texas, Brooks County Sheriff’s Deputy Don White of Remote Wildlands Search and Recovery volunteers his time to search for the injured and dead. Most often, he says, he finds males, aged 19 to 40, from Mexico, Guatemala, Honduras, or El Salvador.

Brooks County Sheriff Benny Martinez estimates that for every body they find, another five to 10 are never recovered.

“I’ve spoken to a lot of mothers over the telephone, or they’ve been here in my office, crying for their loved ones that have been lost for 10, 15 years,” Martinez, a Democrat, said in an earlier interview.

“Our terrain is real sandy. We’re about 100 foot above sea level. So once that sand starts going over that body, and that body starts getting torn apart by the feral hog, by the coyote … the only time it’s recovered is when they’re moving cattle and they turn the soil over … [and] a skull would pop up, or something. Body parts would pop up. That’s how we’re going to find out that something laid there for a while. I mean, what is compassionate about that?”

In Kinney County, southwest Texas, the sheriff used to handle one or two deceased illegal immigrants per year.

“The thing is, it’s 17 bodies in a small county,” Sheriff Brad Coe told The Epoch Times in December 2022. Kinney County sits on the border with Mexico and has a population of about 3,600 people.

“Brooks County will always lead the state in the number of dead, but for us here, 17 was an astronomical number when we’re used to one or two.”