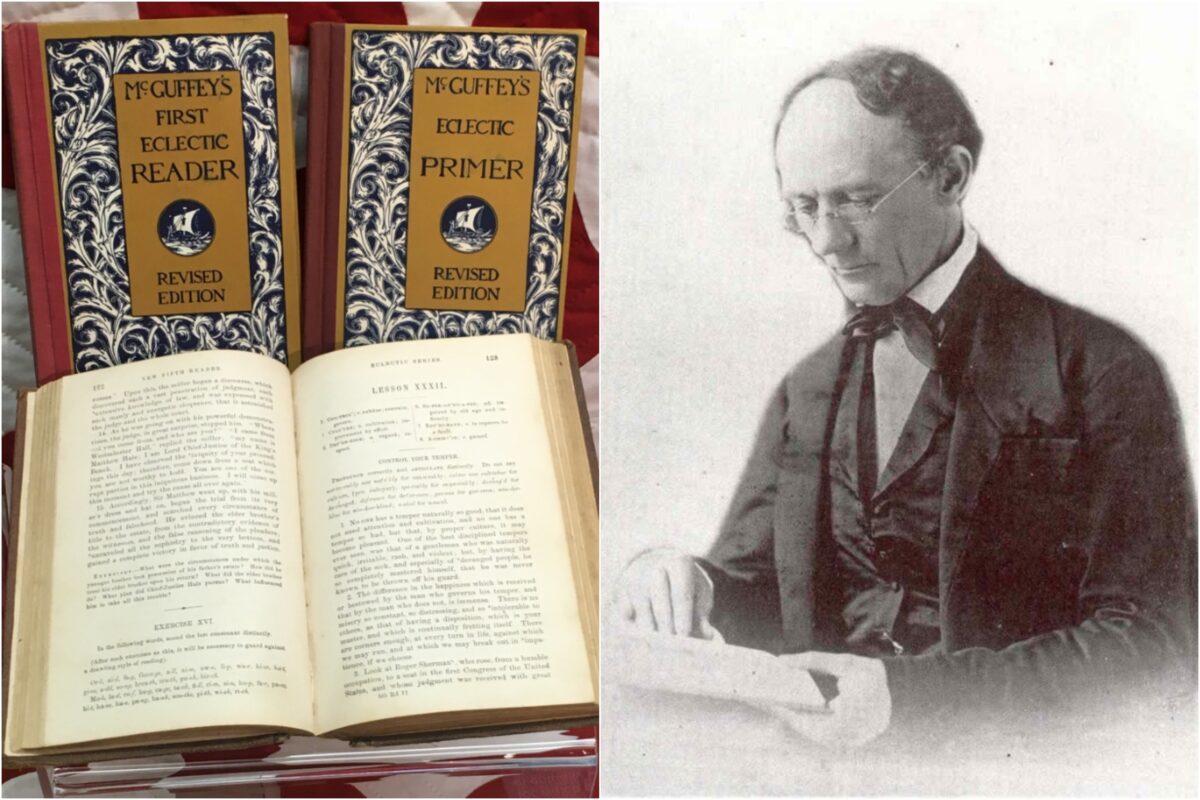 Rebuilding the Foundations With McGuffey Readers

The state of Florida is making a lot of waves lately, and the recent announcement that 41 percent of potential mathematics textbooks and materials were rejected by the Florida Department of Education is no exception. Critics responded with dismay, hinting that such decisions were based on politics rather than teaching.

Yet rejecting these textbooks was an attempt to get politics out of education, such as “indoctrinating concepts like race essentialism,” and get back to the basics of straightforward learning, Florida Gov. Ron DeSantis said in a statement. Given that 71 percent of materials in grades K–5 were rejected, it seems that Florida might have its work cut out for it to find decent, straightforward curricula.

To aid them in this uphill quest, I have a textbook recommendation of my own. Granted, it’s a reading textbook, not math, but given Florida’s difficulty in finding solid textbooks for math, it seems likely they’ll have trouble finding appropriate textbooks for other subjects as well and would benefit from a head start in their search. My recommendation? McGuffey’s Eclectic Readers.

McGuffey Readers were used by elementary students across the United States in the 19th and early 20th centuries. The lessons taught solid moral character, and the reading selections were often short stories, poems, or excerpts from classic texts and authors. Lesson 102 in McGuffey’s Fifth Reader is a poem by Sir Henry Wotton, “The Character of a Happy Life,” and is a prime example of what Florida schools can expect to have their students learn by using the McGuffey Readers. A bonus of the lesson is that it even touches on themes that those who want to see more critical race theory or social-emotional learning in the schools appreciate … although perhaps not in the way they expect!

The poem opens with the following verse:

“How happy is he born and taught,
That serveth not another’s will;
Whose armor is his honest thought,
And simple truth his utmost skill!”

Here we see a pet educational goal of our public schools: critical thinking. Yet the critical thinking advanced here is based on logic, which relies on rational thought and knowledge of facts, rather than the mere creative deconstruction that seems to be the theme of today’s critical thinking. When children learn logic, they’re able to know the truth and think for themselves rather than being sucked into the cookie-cutter thought process often advanced in schools today.

The second verse of the poem addresses the issue of social-emotional learning, which encourages students to get in touch with their emotions and use them to make decisions. Yet this McGuffey lesson teaches students to do the reverse—to not be controlled by their feelings or standing in the world:

“Whose passions not his masters are,
Whose soul is still prepared for death,
Untied unto the worldly care
Of public fame, or private breath;”

Moving on to the third verse, we see hints of the ever-popular critical race theory, which is fond of discussing inequalities between the races. Yet instead of emphasizing inequalities, the McGuffey lesson encourages students to avoid envy when they see disparities between themselves and those who are better or worse off:

“Who envies none that chance doth raise,
Or vice; who never understood
How deepest wounds are given by praise;
Nor rules of state, but rules of good:”

Faith and religious training have been taboo in U.S. public schools for years, yet as the next two verses explain, the happy individual is one who has strong moral principles, who regularly engages in prayer, and who spends time studying religious material. Students who incorporate such principles into their lives won’t be swayed either by flatterers or difficult times, for they’ll have a strong foundation of truth and right.

“Who hath his life from rumors freed,
Whose conscience is his strong retreat;
Whose state can neither flatterers feed,
Nor ruin make oppressors great;

Who God doth late and early pray,
More of his grace than gifts to lend;
And entertains the harmless day
With a religious book or friend;”

The poem concludes by saying:

“This man is freed from servile bands,
Of hope to rise, or fear to fall;
Lord of himself, though not of lands;
And having nothing, yet hath all.”

In other words, the happy man doesn’t demand favors, safety, or security. Instead, he knows that the one who has freedom and knows how to govern himself has true wealth. He then acts accordingly to ensure that he keeps such freedom.

Of course, were such lessons to be introduced—many teaching the exact opposite of today’s popular educational theories and philosophies—they would be highly unpopular and probably even called racist, sexist, or some other label that may not apply, but sounds impressive nonetheless. The reason is that the lessons taught in the McGuffey Readers are clearly ones designed to give students a chance at a successful and joy-filled life—one far different from the controlled, depressing life that the government seems to enjoy inflicting upon its citizens in recent years.

Public figures in Florida are beginning to recognize that today’s textbooks are often passing along concepts that don’t lay a good foundation to turn students into happy, successful citizens one day. This is likely happening because parents have been standing up, speaking out, and pulling their kids from the clutches of public schools. Now it’s time to take the next step and start advocating for a curriculum that teaches students to be good, upright students who can think for themselves without being swayed by emotion. What better place to find a framework than the McGuffey Readers, which are full of lessons vital not only for children, but for ourselves as well.