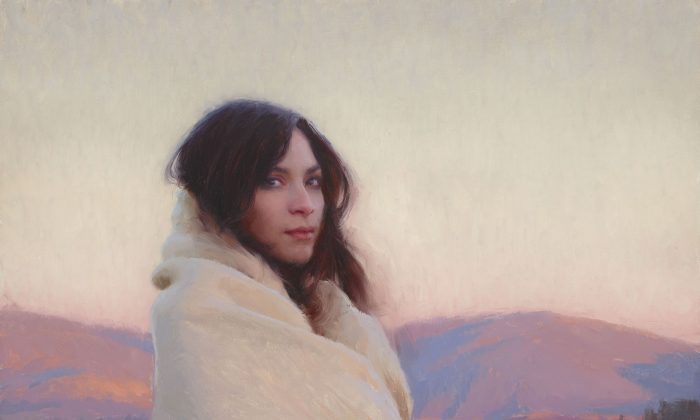 NEW YORK—Hailed as one of the youngest realist masters of our time, California-based artist Jeremy Lipking, 38, has returned to New York for the first time in over three years for a new solo show.

The show consists of 23 recent works centered on the artist’s young family—his 9-year-old daughter Skylar, his son Jacob, and his wife Danielle.

Lipking is recognized by the Art Renewal Center as a Living Master, which the organization defines as one who has the “rare talent, experience and expertise to create great humanistic works of art that are seemingly executed with effortless perfection.”

The exhibition runs through Dec. 31 at Arcadia Contemporary. I spoke to Lipking on Dec. 12 before the show’s opening reception.

Epoch Times: You didn’t begin your formal training until your late teens.
Jeremy Lipking: My dad (Ronald Lipking) is an illustrator so I was always exposed to art. I was 19 or 20 when I started to paint in the way that I paint now. I knew from his success that it is possible to make a living in art.

Epoch Times: What were some of the challenges you faced when you began learning art?
Mr. Lipking: Drawing and studying the figure. At a certain point in the beginning, I realized that in order to paint well, I needed to start drawing. So for almost two years I only did figure drawing, just trying to get really good at representing the figure. I learned from Glen Orbik, a comic book illustrator whose drawings didn’t look like cartoons… I never really had any formal training.

Epoch Times: What made your painting progress so quickly?
Mr. Lipking: After drawing every day for two years, my paintings became completely different. The hard part then was not so much to learn how to manipulate the paint, but color—understanding values and edges. There’s an artist called Richard Schmid who I learned a lot from. Before I met him I had his books and devoured those…then I eventually got to meet him, get critiqued, and pick his brain.

Epoch Times: You’ve been teaching in workshops across the country. How has that improved your own work?
Mr. Lipking: I started after a year of studying. I started teaching a little bit. It helps a lot to try to explain what you’re doing. I think it helps a lot for students to teach. You can understand [beginners’] struggles better if a year or two ago you were in the same position.

Epoch Times: What drew you to figurative and realistic painting as opposed to any other style?
Mr. Lipking: At some point I was introduced to 19th century French realist painters. I just wanted to learn how. It looked so difficult to do—it looked like magic to be able to manipulate paint in a way that makes a two-dimensional surface look like real life.

Epoch Times: Some people might see your painterly brushstrokes and immediately think of Impressionism, but that’s not what your art is. What differentiates the two?
Mr. Lipking: Impressionism is more about using broken color and distinct colors that blend together [visually] when you step back. When I keep [brushstrokes] loose I do it for texture. And I think it looks more real if it’s not painted flat. In real life when you look at a person, though I can see the entire room, only a small part of your face—like your eye—is in focus.

Epoch Times: The paintings in this exhibit feature the members of your family. How did that come about?
Mr. Lipking: I’ve always painted my daughter [Skylar]. She’s been a good model for me since she was old enough to sit still. I just kept going with it. Pretty soon at least half of show became paintings of her.

Epoch Times: Does your daughter like posing for you?
Mr. Lipking: Once she sees the finished painting she likes it. But most of the time I have to bribe her a little bit. Sometimes she comes to the studio and paints. I have a little set-up that she can use.

Epoch Times: You’ve been honored by organizations like California Art Club and Art Renewal Center, who focus on supporting contemporary realists. Do you feel that such organizations are crucial for their success?
Mr. Lipking: The California Art Club was really helpful for me—just to get my paintings hung in a good museum exhibition and have serious connoisseurs or collectors see it. The Art Renewal Center is great too. [Founder and chairman] Fred Ross has been a real champion for realist art for a long time.