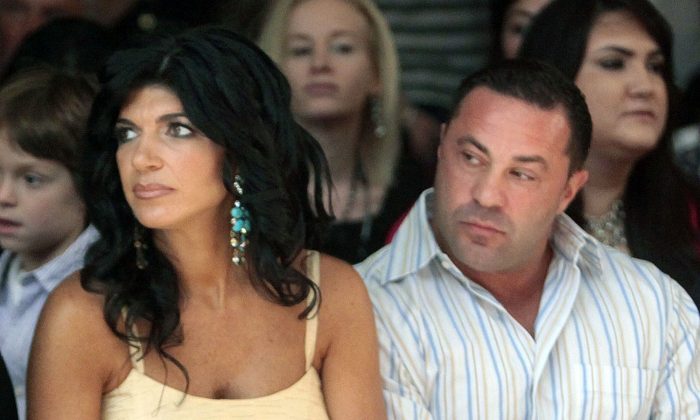 FILE - This Sept. 13, 2009 file photo originally released by Oral-B Pulsonic shows "Real Housewives of New Jersey" stars, Teresa Giudice, left, and her husband Joe Giudice at the Caravan Fashion Show sponsored by Oral-B Pulsonic in New York. Teresa and Giuseppe “Joe” Giudice were charged in a 39-count indictment handed up Monday, July 29, 2013, in Newark, N.J. The two are accused of submitting fraudulent mortgage and other loan applications from 2001 through 2008, a year before their show debuted on Bravo. Prosecutors say they made false claims about their employment status and salaries. (AP Photo/Oral-B Pulsonic, Gary He)
Entertainment

Teresa Giudice of the Real Housewives of New Jersey apparently wants to hire a “chubby” nanny for her family while she’s in prison.

Giudice was sentenced to 15 months in prison after pleading guilty to fraud charges.

While she’s away, she wants someone to help raise her four daughters. But according to a new report, she’s also worried that her husband, Joe, might be unfaithful.

“She wants someone who doesn’t pose a threat,” a source was quoted as saying by the New York Post’s Page Six. “Especially now that she’s not giving him physical attention. For a few weeks, Teresa was phoning agencies, looking for a ‘chubby’ nanny. She knows Joe prefers thin women. She’d feel safe with someone a bit dumpy.”

Sources also said that her search turned up empty, and as a result, she started looking for male nannies.

The couple was also ordered by a judge to pay $422,000 in restitution, meaning that Teresa won’t have a lavish Christmas celebration.

“Teresa explained this year will be different and spending money is not what Christmas is all about,” an insider said.

Meanwhile, Teresa has made a series of cooking videos–teaming up with Glam– share recipes. “A lot of my recipes were passed down from my mom,” she said, per People magazine.

“My mom was born in Italy, I’m first generation here. Then from learning how to cook with my mom, I started coming up with my own recipes,” she added.

According to People, sources have said that she seems stoic in the face of a prison term. “You would never believe anything is wrong with her,” the person said. “You would never know she is going to prison from the way she is acting.”