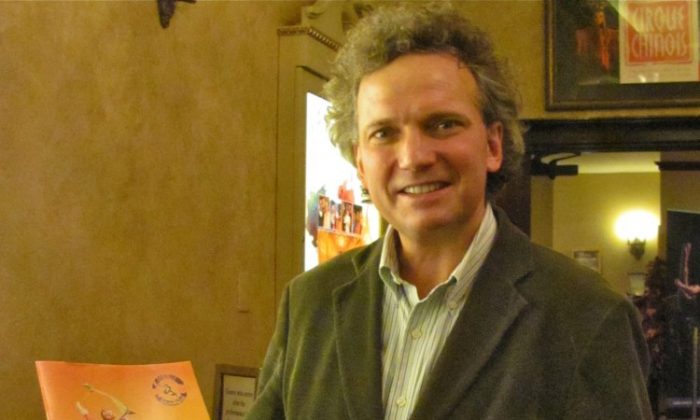 NEW BRUNSWICK, N.J.—Shen Yun Performing Arts wowed the audience with its diverse portrayal of China’s culture from its 5,000-year history during the final performance of the 2012 season.

“I was amazed,” said Mr. McCann after the performance. “It was just really well done and a nice variety of things.”

China’s ancient, and divinely-inspired, history contains a wide range of tales, legends, and stories that originate from the three main religions of Buddhism, Taoism, and Confucianism, according to Shen Yun’s website.

“Sophisticated dance techniques, an orchestra joining instruments East and West, beautiful costumes, and a stunning back drop—this is Shen Yun at first glance,” states the website. “But digging deeper, one discovers a sea of traditional Chinese culture. Mortals and divine beings merge on stage as one. Principles such as benevolence and justice, propriety and wisdom, respect for the heavens, and divine retribution, all come to life, washing over the audience.”

Shen Yun’s unique orchestra—which combines a Western philharmonic foundation with traditional Chinese instruments such as the 4,000 year, two-stringed erhu, or Chinese violin—caught Mr. McCann’s attention. “[It’s] a nice mix of the Western and the Eastern musicians, that blended very nicely.”

Despite having a mission of reviving traditional Chinese culture and traveling to more than 100 cities across the globe every year, Shen Yun is currently unable to perform in China because the ruling communist regime has nearly destroyed ancient culture.

“It is outside of China that Shen Yun’s artistic creators have the ability to freely express themselves and their ancient culture,” the company’s website states. “Their courage to speak up is an integral part of Shen Yun’s spirit.”

Mr. McCann could see a yearning for freedom for the Chinese people in the performance, particularly in the pieces that touched on the current situation in China regarding Falun Gong, a meditation practice that is based on truthfulness, compassion, and tolerance that has been persecuted by the regime since 1999 due its explosive growth and stark contrast with the regime’s ideology.

Mr. McCann said he hopes Falun Gong practitioners in China will once again be allowed to practice freely.

“As I was saying to my friend, is there a reason that people shouldn’t be allowed to meditate?” he asked rhetorically.

One of the legends depicted during Shen Yun’s performance is the Monkey King, who is the central character in China’s classic novel Journey to the West. The portion of the novel seen in the 2012 program is when the Monkey King travels to Heaven’s peach orchard and encounters a group of fairies picking peaches for a celestial banquet. A humorous series of events ensues.

Mr. Gao enjoyed this piece as well as the entire performance.

“When I go back to school, I will tell [my friends] what I saw here,” he said. “It was a big show with Chinese tradition.”