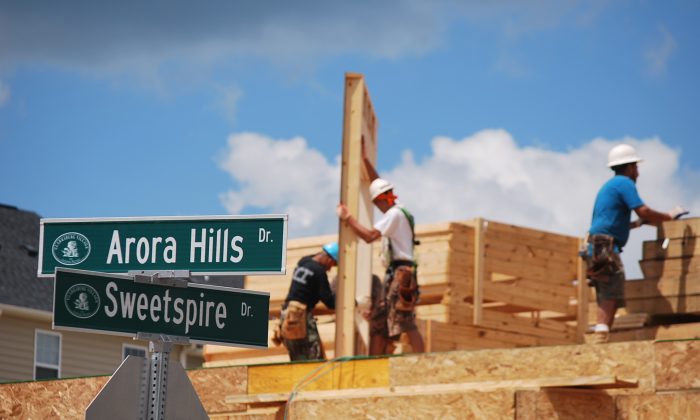 CLARKSBURG, Md.—In a sign of economic rebound, construction continues in Clarksburg Village, on the subtle rolling hills of Maryland.

Less than one hour north of Washington, sit rows upon rows of traditional American and neo-traditional style homes. Many of the houses seem inspired by the Greek revival style. Meticulously manicured lawns surrounded picket fences.

“With our home being built, it was built from the ground up, so we’ve had quite the experience (good and bad). From picking out the details to our closing being pushed back, we really learned a lot about the process,” said Alissa Kelly, a publicist with Bullseye Communication, who purchased her first home in Clarksburg a year ago.

Kelly elected to be involved in the process while her home was constructed instead of opting to purchase a home or town home after it was finished.

“Harris Teeter is the driving force for the grand opening [of the retail center in Clarksburg Village], and they hope to open for the holidays,” said Kate Kubit, vice president of Elm Street Development of McLean, Va., the Gazette reported. “People are very excited about this.” Elm Street Development owns the center that will house the store.

The Peterson Companies and Bethesda-based Streetscape Partners plan to build two outlet shopping malls in Clarksburg. Community members and environmental groups have expressed concerns over the malls and the potentially harmful effects of the developments on a crucial local stream.

Ten Mile Creek flows into Little Seneca Reservoir, a backup drinking water source for much of the Washington area, according to Bethesda Magazine.

The Peterson companies and Tanger Outlets have created a plan to the watershed, in their plan for Streamside at Clarksburg, which is a development that includes upscale outlet malls, restaurants, hotels, and housing. Their plan includes restoration of Ten Mile Creek, and it addresses storm water and drainage, according to the developer’s website.

For homeowners who want to live surrounded by the natural environment that community members are working hard to protect, Craftmark constructs estate homes in Clarksburg. Just down the road from the new developments is the old Clarksburg, where long roads are flanked by sprawling fields, farms, and pastures.