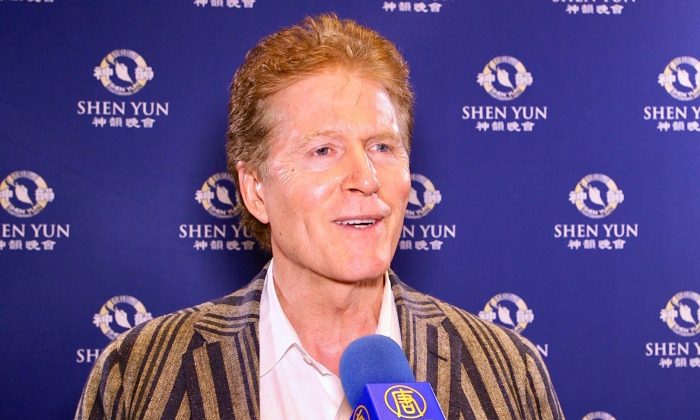 “[Shen Yun] was really, really good. I didn’t know what we were in for. It’s very interesting. I really enjoyed it.”

“The women were just gorgeous and agile, and athletic, but very feminine—it was really, really interesting.”

“It was very original. I thought it was really fun. They did a piece where they had these [sleeves] that were six feet long, and they were flying them around, and they would pull them back in [‘Han Dynasty Sleeves’]. Whoever did the wardrobe is really a genius—dreamed that up and made it work—because it was really effective.”

“I was surprised that it was a live orchestra. … It was very relaxing. It was really fun.”

“The music was very light, with a lot of string. Then the drums were cool, when the guys come out and they had all those big drums lined up. I liked that. It was really well done.”

“Here in the West, we hear a lot about religious persecution in the East. I’ve never been to China, but from what I’ve heard, I think you get a much deeper sense of spirituality because it’s not something you can take for granted. It’s something that, it could be the end of your life. You could be beaten for it, so your life could be a whole lot different …”

“It’s a very gutsy thing to do. I think the gentleman who came out, the announcer, said this [Shen Yun] was not something you could do [in China.] It was really moving.”

“The [soloist’s] translation was really effective because it really put his emotions into words by having it on the screen. I really liked that.”

“It was really breathtaking. It really was. There was so much going on. It was so much more than I expected. It was just transcendent. It was way beyond anything that I had expected. That was fun. That was a lot of fun.”