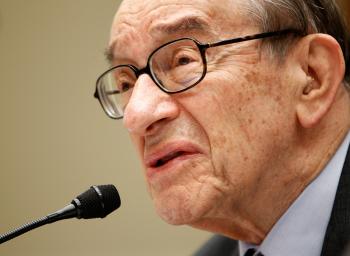 Greenspan said that the U.S. economic recovery is in a pause, and that if home prices across the United States continue to decline, the economy may be headed toward a new recession.

He pointed to the unemployment rate—still hovering around 10 percent—as an indicator of the very modest economic recovery. “Our problem, basically, is that we have a very distorted economy in the sense that there has been a significant recovery in a limited area of the economy amongst high-income individuals,” Greenspan said.

Large banks and large corporations have rebounded, evidenced by the amount of companies beating financial forecasts during the second-quarter earnings season that is currently underway. But small banks and small businesses are still struggling in much of the country.

Housing Sales Stagnate
Greenspan said that the U.S. economy may sink into a new recession if housing prices continue to drop. “Home prices, as best we can judge, have really flattened out in the last year,” he said. “Foreclosures would feed on the weakness in prices, and it would create a problem.”

Mortgage rates have remained around record lows over the past several weeks but government data show flat sales of existing homes.

In June, existing U.S. home sales declined 5 percent, according to data from National Association of Realtors (NAR), to a seasonally adjusted annual rate of 5.37 million homes.

Much of the decline is due to the expiration of federal new home buyer tax credits, which expired in late April, but some sales that began in April had just recently closed.

“Broadly speaking, sales closed after the home buyer tax credit will be significantly lower compared to the credit-induced spring surge,” said Lawrence Yun, NAR chief economist, in a recent statement. “Only when jobs are created at a sufficient pace will home sales return to sustainable healthy levels.”

But on the whole, real estate sales are expected to trump the levels seen in 2008 and 2009. “Despite these market swings, total annual home sales are rising above 2009 and we’re looking for overall gains again this year as well as in 2011,” said NAR president Vicki Cox in a statement. “Conditions have become more balanced in much of the country, which is good for both buyers and sellers.”