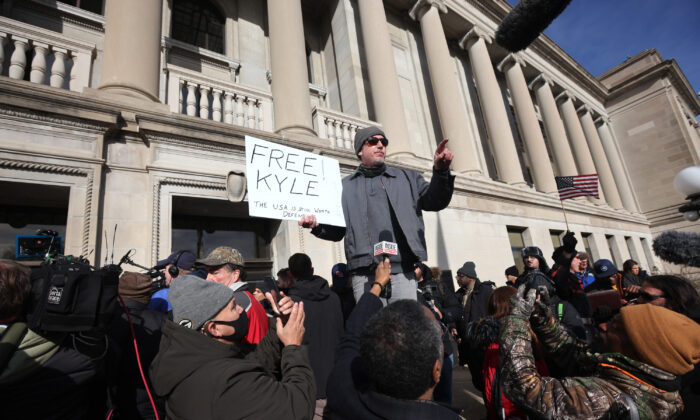 A supporter of Kyle Rittenhouse celebrates after learning that Rittenhouse was acquitted of all charges, outside of the Kenosha County Courthouse in Kenosha, Wis., on Nov. 19, 2021. (Scott Olson/Getty Images)
Viewpoints

Real Americans Not Being Fooled Anymore

Have you finally had enough yet? Do you sense the worm beginning to turn? Has the constellation of abnormalities that currently afflicts the real-American body politic gotten your attention at last? Isn’t it time for all of us to stand up for the nation-as-founded and reject those who would destroy it in order to usher in their cultural-Marxist paradise?

Consider the events of the past few days.

In Kenosha, Wisconsin, teenager Kyle Rittenhouse was found not guilty on multiple charges stemming from his shooting of three Antifa rioters, killing two of them. Despite the media’s best attempts to portray his rabid assailants as “victims”—a victim being the highest possible moral plane of human existence—real Americans at least tacitly approve of his actions.

His life was demonstrably in danger, he had retreated as far as he could, and at least one of the rioters tried to disarm him when he opened fire while another pointed a loaded pistol at his head. What would you do?

Naturally, everyone from Joe Biden to the lowliest media shill tried to smear him—before, after, and during his trial—as a racist and “white supremacist,” their current favorite term of opprobrium (Rittenhouse and the three assailants are/were all white). Why was a 17-year-old even there? How dare he carry a rifle! How dare he cross state lines!

Never mind that he had been invited to help defend property there after days of mayhem and that the rifle was perfectly legal. And as for “crossing state lines,” so what? The idea of standing up for your neighbors and putting your life on the line during a violent riot is alien to the press trolls who literally can’t comprehend something that’s perfectly clear to any real American.

Despite the media’s adulation of victimhood, every real American knows that no one has an affirmative duty to become a victim. As Gen. George Patton famously said during World War II: “No bastard ever won a war by dying for his country. He won it by making the other poor dumb bastard die for his country.”

Antifa just found that out the hard way. This, thanks to the rancid left, is now war. It won’t be the race war that The New York Times and the rest of the Media Manson Family so fervently root for and try to bring about, but a war for the restoration of civic order and the preservation of lives and property.

On the COVID-19 front, the maleficent media—having just been roundly exposed as both inept and malicious with the collapse of the Hillary Clinton-organized “Russian collusion” hoax—is once again stoking the fires of hysteria by announcing, right on schedule, that thanks to the change of seasons, the Chinese Communist Party virus from Wuhan is deadlier than ever, that lockdowns again loom, and—most ridiculously—that you can’t be vaccinated enough with the experimental mRNA gene therapy masquerading as a real vaccine. You need two, no three, no four, no more doses; mix and match, it doesn’t matter. Knock yourself out!

They’re not fooling anybody anymore. Vermont, the most vaccinated state in the Union, is now seeing a surge in “cases,” as is well-vaccinated Europe—except for Sweden, which never locked down in the first place and thus maintained its freedom and its dignity. But the place with the least problem with COVID-19 turns out to be Africa. With more than 1 billion people on the continent, it has had fewer COVID-19-related deaths than the UK, and the countries there have largely removed all their restrictions. Journalists are scratching their heads trying to figure out how this is possible.

Meanwhile, riots have broken out across Europe. In the Netherlands, shots were fired. Roundheeled Austria, the first country to roll over for Hitler without a fight, has returned to full-lockdown status and is now demanding mandatory vaccination starting in February.

In panic-stricken Germany, former East German citizen Angela Merkel thinks what the country needs is more authoritarianism. Jens Spahn, Merkel’s health minister, is on record as saying that all Germans will be “vaccinated, cured, or dead” by the end of the winter, which sounds more like a promise than a threat.

And in news that’s sure to bolster confidence in the strategy of “keep trying everything that’s already failed multiple times, only this time harder,” the Food and Drug Administration has asked a federal judge in Texas to give it 55 years—you read that right, until the year 2076—to produce the data it used in approving the Pfizer vaccine. The request for the information came via a Freedom of Information Act request by a group known as the Public Health and Medical Professionals for Transparency.

Meanwhile, the Biden administration’s unconstitutional attempt to mandate the vaccine for private companies has been blocked by the federal courts and is beginning to encounter stiff resistance from places where you might expect it (the U.S. Marine Corps) and places where you wouldn’t (Disney).

True, a different federal judge has recently blocked Florida Gov. Ron DeSantis’s appeal for an injunction against a less-sweeping Biden order requiring vaccinations for the state’s health care workers laboring in facilities that participate in Medicare (for the elderly, who pay into the federal program) and Medicaid (for the indigent, who don’t). But DeSantis is no quitter, so watch him continue the fight.

Everyone expects real Americans to punish the anti-American Democrats who actively and frankly seek the ruination of the country. Gun sales are already through the roof, and ammo is in short supply. Expect more of the same in the wake of the Rittenhouse verdict (self-defense is an absolute right), as well as the wanton murder of six innocents and the injuring of scores more in Waukesha, Wisconsin, over the weekend by a rap artist-cum-career-criminal named Darrell Brooks, Jr., who was out on “inappropriately low” bail, thanks to a Milwaukee prosecutor’s recommendation. He’s being charged with murder. Let’s see if the left dares make him a hero.

And for how much longer are real Americans going to stand by as COVID-19-masked gangs empty out everything from the corner drug store to Louis Vuitton and Nordstrom? The Democrats’ goal of decriminalizing underclass violent crime is now reaching its apogee, and even the least political among us have begun to notice.

Well, the Democrats have been begging for a major reduction in force at least since 1860. The question is, who should lead the Republicans?

Former President Trump has all but declared that he’s running again—but three years is an infinity in politics, and Trump can only play coy for so long. As the memory of him fades and the nation’s hunger for leadership increases, all eyes will be on DeSantis and his reelection campaign in 2022. A decisive win will cement the current shadow president of the U.S. front-runner status as Americans look to the future.

All the Republicans have to do is nominate someone of relative youth and vigor who’s not afraid of entrenched Washington, who treats the media with the contempt they so richly deserve, and who’s proven himself in an executive capacity.

Someone, in other words, exactly like DeSantis, who can also tap a plausible vice-presidential candidate with Washington experience. Someone with military experience as well, and someone who’s already publicly eviscerated Harris on the national stage. A mixed-race woman who checks all of the intersectional boxes. Someone exactly like Tulsi Gabbard.

And before you say that it can never happen because Gabbard’s a Democrat—so was Donald Trump.