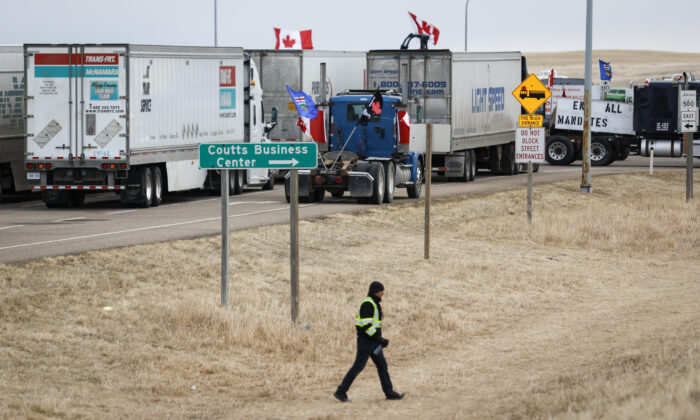 Demonstrators gather at the busy U.S. border crossing in Coutts, Alta., on Jan. 31, 2022. (THE CANADIAN PRESS/Jeff McIntosh)
By Andrew Chen

A convoy of more than a hundred vehicles continued to blockade a highway at the Canada-U.S. border crossing in Alberta for the third day on Jan. 31, disregarding the RCMP’s request for the group to leave.

On Jan. 29, a large convoy of vehicles blockaded Highway 4, south of Lethbridge, Alta., heading to the village of Coutts, to show their support for the national truck convoy that arrived in Ottawa over the weekend in protest of the federal government’s vaccine mandate for all cross-border truckers.

The RCMP in Alberta issued a statement on Jan. 30, calling the blockade “unlawful,” but said the police are trying to find a peaceful resolution.

“Extensive efforts have been taken to engage with all stakeholders in the hopes that a peaceful resolution can be reached,” the police said.

“The Alberta RCMP will use only the level of intervention necessary to ensure the safety of all citizens and to maintain peace, order, and security. Our goal is to facilitate lawful and peaceful protest. When an event becomes unlawful we utilize a measured approach, which ultimately includes enforcement. This event is unlawful and we are asking those who are involved to clear the area.”

As the blockade continued on Jan. 31, the RCMP brought in tow trucks and opened up a lane for local traffic, while saying the border will remain immobilized.

Alberta Premier Jason Kenney said in a statement issued on Jan. 30 that the convoy at the border “must end immediately,” while warning that the police and prosecutors have the power to levy additional penalties to address the blockage of highways and other infrastructure when they find it necessary.

“The Current blockage of Highway 4 at the Coutts border crossing violates the Alberta Traffic Safety Act. It is causing significant inconvenience for lawful motorists, and could dangerously impede the movement of emergency service vehicles. This blockade must end immediately,” Kenney said.

“If participants in this convoy cross the line and break the law, I expect police to take appropriate action.”

The blockade of the Coutts border crossing violates the Alberta Traffic Safety Act.

It is causing significant inconvenience for lawful motorists and could dangerously impede movement of emergency service vehicles.

This blockade must end.

RCMP Cpl. Curtis Peters said on Jan. 30 that an ambulance has been able to enter Coutts and that no arrests have been made.

The “Freedom Convoy” protest in Ottawa also continued on Jan. 31, with protesters using speakers to address the crowd gathered before Parliament, demanding the federal government lift the vaccine mandate for all truck drivers crossing into Canada from the United States.

Under the mandate, unvaccinated or partially vaccinated Canadian truck drivers are required to quarantine for 14 days upon re-entering the country.

The cross-country convoy has since expanded into a national movement, with thousands of supporters joining to protest against other pandemic-related restrictions.