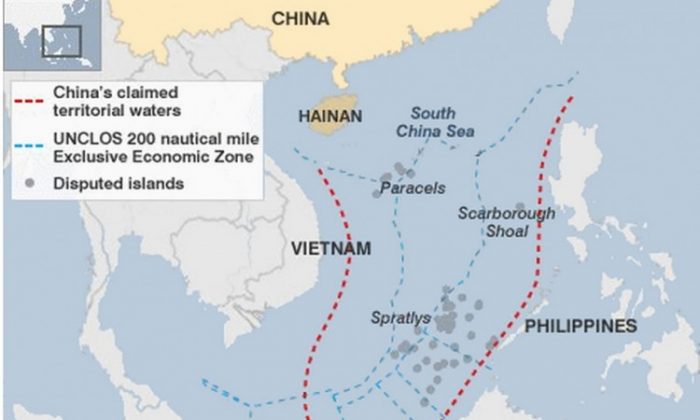 A map showing waters disputed by China in the South China Sea. (UNCLOS and the CIA)
US

WASHINGTON—The need for the United States to sign onto a maritime treaty is a matter of “utmost security and economic urgency,” Secretary of State Hillary Clinton told a Senate hearing Wednesday.

The U.N. Law of the Sea Treaty (LOST) has become the leading accord in dealing with international maritime disputes, offering guidelines on a range of issues—including free passage through world’s seaways, jurisdiction of ocean beds, and passage for underwater telecommunication cables.

Whether to join the international body has been a point of discussion in the U.S. Senate for over 20 years—but to date, the United States remains one of the few major countries that has not signed up. Currently, 160 nations, including Russia and China, are members.

Clinton said, “Twenty years ago, ten years ago, maybe even five years ago, joining the convention was important, but not urgent. That is no longer the case.”

The race for resources is a big contributor to the urgency. The convention allows nations to claim economic sovereignty over their continental shelf to a distance of around 200 nautical miles from shore. That would extend U.S. territory by at least one-and-a-half times the size of Texas, maybe more, Clinton said.

Before, oil and gas companies did not have the technology to drill in such areas. Yet, now that they do, without the treaty they do not have the legal certainty of jurisdiction.

Similarly, mining companies now have the technology to mine deep waters, beyond the continental jurisdiction, but without the mechanism the Treaty provides to ensure secure title, companies are hesitant to make expensive investments.

“As long as the United States is outside the convention, our companies are left with two bad choices: either take their deep-sea mining business to another country or give up on the idea,” Clinton said.

Warming of the Arctic region has also opened opportunities in fishing, oil, and exploration, as well as shipping and tourism. While Russia and other Arctic nations are using the treaty’s framework to capitalize on those opportunities, the United States is only one of seven Arctic nations not a LOST member, and it remains “on the outside looking in,” Clinton said.

Adding to the urgency is that LOST members are moving forward on a range of issues on which the United States has no input. Notably, a move by 40 countries to draw up rules related to the deep-sea mining of minerals is “of great interest to the United States and American industry,” Clinton said.

Clinton was referring to rare earth elements that are essential for the production of not only high-tech products like cellphones, computers, and flat-screen televisions, but also military equipment.

China presently has around 90 percent of available rare earth minerals, the Senate heard, a power it has shown that it will use strategically, like when it blocked supply to Japan in 2010 after a maritime dispute.

“While we are challenging China’s export restrictions on these critical materials, we also need American companies to develop other sources,” Clinton said.

Dempsey said the treaty made concrete U.S. military rights, spelling out “navigational rights and freedoms,” while ensuring the right of “innocent” passage through foreign territorial seas. It also affirmed “the sovereign immunity of U.S. warships and other public vessels,” he said.

The U.S. Navy is the world’s largest and most capable, Dempsey said, but increasingly other nations are looking to restrict international seaways. “[LOST] gives us the framework to counter excessive claims by states seeking to illegally restrict movement of vessels and aircraft.”

“These are all rights and capabilities that we want and that we need,” he said.

Dempsey was referring to threats by Iran to close the Straits of Hormuz—critical to the distribution of oil to the West—and China’s claims on large swathes of the South China Sea, a territory that penetrates far into the 200-mile continental shelf zone of other Southeast Asian countries.

Responding to criticism that the treaty undermines U.S. military power, Secretary Panetta told the hearing there is, “No question we have the strongest navy, but engaging in gunboat diplomacy will result in conflict and will jeopardize our national security.”

Panetta has consistently noted that global security is complex and challenging, and beyond the domain of any one single nation to resolve. The Obama administration has made clear that its approach to defense strategy is to develop a rules-based international order, building on regional security partnerships.

“We are strong because we play by the rules, not because we go against those rules,” Panetta told the hearing.

The difficulty of being outside LOST is not only that the U.S. is unable to influence rule-making and rule interpretations within the body, but also that America appears hypocritical about rules-based decision-making, Panetta said. They ask, “How can you assert that, when you are not even part of the convention? That is our concern,” he said.

Senate Republicans were not convinced by the administration’s high-level representation.

Senator Mike Lee (R-Utah) raised concerns that the treaty requires the U.S. to pay royalties on mining leases from deep-water mining and that the United States would be unable to control where those funds went.

Clinton said the benefits would far outweigh the cost, and explained that the United States had a permanent seat on the LOST council, once it became a signatory, which would enable America to determine where those funds went.

Sen. Jim DeMint (R-S.C.) believes the treaty would leave U.S. businesses vulnerable to environmental lawsuits, and suggested that the treaty was just another set of laws that rogue countries would ignore.

Sen. Kerry, who has supported signing the treaty, said the Senate would not push for a vote on the treaty before the general election, noting that the hearing was the first of a number to come that would address Senators’ concerns.