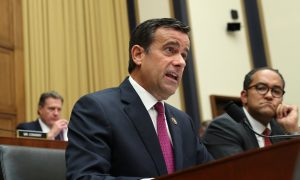 Director of National Intelligence John Ratcliffe said it’s necessary to scale back election security briefings in person to Congress because of leaks.

Over the weekend, reports said Ratcliffe and the Office of the Director of National Intelligence (ODNI) told the House and Senate intelligence committees that it will still provide written briefings on election security matters. Ratcliffe, in letters to the panels, said that leaks from members of Congress were a primary reason for the change.

Ratcliffe said on Fox News that he had been frequently briefing “not just the oversight committees but every member of Congress.”

“They’re going to put it in writing now instead of giving an oral briefing. That doesn’t make any sense unless the goal is not to allow members of Congress, the representatives of the American people, to ask questions,” Schiff told CNN’s “State of the Union.”

“Concealing the truth is concealing Russians are again intervening to help the president in his reelection.”

“President Trump is hoping Vladimir Putin will once more boost his candidacy and cover his horrific failures to lead our country through the multiple crises we are facing. And he does not want the American people to know the steps Vladimir Putin is taking to help Trump get re-elected,” Biden said in a statement.

“Beijing recognizes its efforts might affect the presidential race,” Evanina said in July.

“But tactically, the U.S. approach would be more predictable, and Biden is much smoother to deal with than Trump—a viewpoint that is shared by many countries,” it stated.

In the meantime, top Democrats in the House and Senate have frequently said that Russia is again attempting to help Trump win reelection without making mention of the Chinese Communist Party’s efforts.

“What I think is happening here is the Democratic Party and the Chinese Communist Party have entered into a common cause to defeat Donald J. Trump, and their whole strategy is based on blaming this administration for a global pandemic created by the Chinese Communist Party,” White House trade adviser Peter Navarro told reporters several weeks ago.