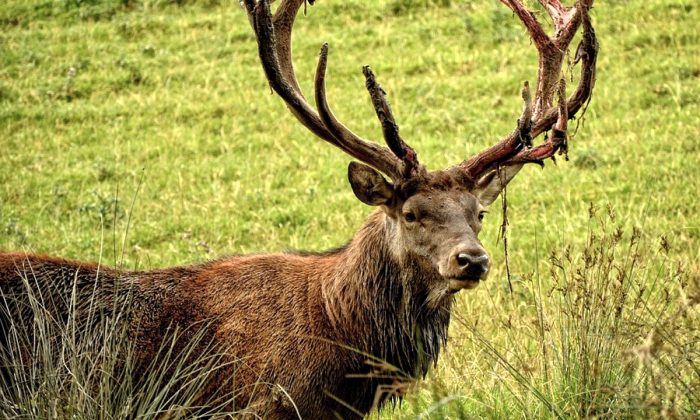 Stock image of a deer. (Antranias/Pixabay)
US News

A man in Northern Michigan spotted the rarest of the rare deers on his property on May 29—a ‘pitch black’ deer caused by an extremely uncommon genetic mutation.

“I see a lot of critters up here but I have never seen nor even heard of one of these. I was taking my trailer back to my pole barn property yesterday and so drove past the driveway in order to back in,” John Roach wrote on Facebook.

“As I looked to my left I saw 2 deer in the lane that runs to the back of the property-nothing unusual except that one was typical and one was pitch black. I had my phone on the seat and was able to get 2 good shots of them before they ran to the pines to the west,” he posted.

Black Deer or Melanistic Whitetails are black in color because of a rare but random genetic mutation makes them produce more of the pigment melanin.

“Melanistic whitetails are a true gem of whitetail color morphs. With very low odds for this genetic mutation and low reported harvest, viewing a wild melanistic whitetail is a true rarity, even for deer biologists who work where they are most prevalent,” said Quality Deer Management Association (QDMA) on its website.

The association reports that the first black deer was reported in 1929 and they have been reported in Mississippi, Michigan, Virginia, Pennsylvania, Texas, and South Carolina since. They can be found whenever the mutation happens.

Steve Griffith, a Wildlife Biologist with the Michigan Department of Natural Resources (DNR,) told ABC6 that black deers are even rarer to find than albino deer.

“I’ve never seen one, and I have been working for the DNR for 20 years. My understanding is it’s rare.

“I’ve seen several albino deer including at least one in the Traverse City area,” said Griffith. “So, this will be the other end of the spectrum from an albino deer. This is the first one.”

According to Mossy Oak, an organization involved in hunting, conservation,  stewardship and legacy efforts, “By definition, an albino deer is totally absent of body pigment and is solid white with pink eyes, nose, and hooves.

It continues: “Since whitetails are a prey species, being solid white carries some serious disadvantages. Not only are they highly visible to predators and hunters from the day they are born, but albino deer can also have poor eyesight. With the handicaps that an albino deer may have, it would be rare for one reach maturity or even more so, old age.”

Albino deers are still rare in the wild; Native Americans consider them to be magical and believe that hunting them will bring bad luck.

Researchers say that melanism offers an advantage to the deer population as it helps them to camouflage.

“The researchers admit that they aren’t sure, but they say the mutation likely has been perpetuated because it offers a survival advantage,” says an article on the North America Whitetail website.

Melanistic deers are not just black in color but come in a variety of shades.

Counting down the 15 most widely read articles from https://t.co/vooInllOsk in 2018.

“Indeed, there’s a wide range of shades, with some being quite black and others being more of a dirty brown or dark gray. This has led some biologists to wonder if a single gene controls hair color or if instead multiple genes combine in a variety of ways to display a wide range of forms,” the article says.

The biologists also report of semi-melanism that makes deers somewhere between the normal and melanistic deers.

“Semi-melanistic deer have the dark overall coloration of melanistic deer but retain the white areas of normally colored deer,” it says in the article.