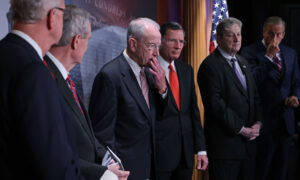 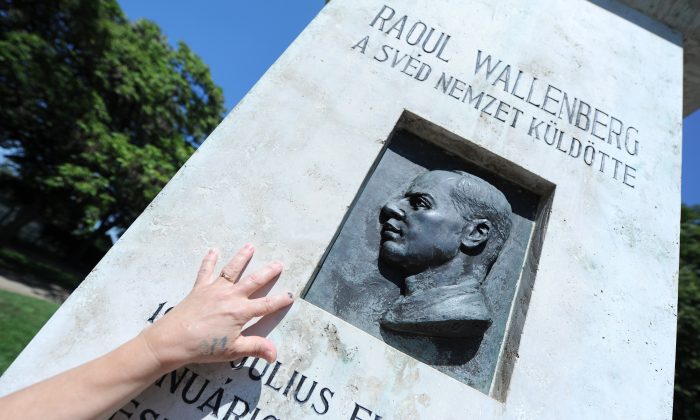 A memorial stone of late Swedish diplomat Raoul Wallenberg in St. Istvan Park of Budapest on Aug. 1, 2012, prior to the 100th anniversary of Wallenberg's birthday on Aug. 4. (Attila Kisbenedek/AFP/Getty Images)
Opinion

Raoul Wallenberg, the Swedish diplomat and Canada’s first honorary citizen, is one of the most admired heroes of World War II for saving approximately 50,000 civilian lives through issuing passports of then neutral Sweden to Hungarian Jews.

The rescues began after President Franklin Roosevelt finally created the War Refugee Board in 1944. Wallenberg’s work was funded by the board after Hitler invaded Hungary that year, because its pro-Axis government had refused to send its Jewish citizens to gas chambers.

Wallenberg demonstrated that courageous effort for good can overcome the worst in human nature. His family on his mother’s side has for seven decades since attempted without success to learn what occurred after he was arrested in Budapest by Soviet soldiers on Jan. 17, 1945. The moral duty of all responsible governments to establish the truth about what happened remains unfulfilled.

Wallenberg demonstrated that courageous effort for good can overcome the worst in human nature.

Both the United States and Canada have made major progress since 1945 in celebrating religious and cultural diversity. Canada’s National Holocaust Day on May 5, for example, attracted many young people to the ceremony. Prime Minister Justin Trudeau stressed that “discrimination, racism, and antisemitism” are unacceptable in Canada.

Wallenberg’s values were central to the first Wallenberg Award for Moral Courage in the Face of Antisemitism or other forms of intolerance presented this year in Canada’s Parliament. The first winner, Rev. Majed El Shafie, has confronted antisemitism and the persecution of other faith minorities in various parts of the world.

“The Devil That Never Dies: The Rise and Threat of Global Antisemitism” (2013) by Daniel Goldhagen, formerly of Harvard, offers important insights. The thesis is that antisemitism has exploded in recent decades, largely due to misinformation and falsehoods, insinuating itself into the minds of millions of persons globally, frequently anonymously by way of the Internet.

Two of its key points: Christians were misinformed for centuries that Jews, rather than Romans, killed Jesus (fortunately, Christians now repudiate such falsities). Muslims are wrongly still told by some spiritual leaders that Jews are the enemies of Allah.

Iran and Iraq exemplify jurisdictions where Muslims are persecuted. In the first, some Shiites harass and persecute Sunnis; in Iraq, Sunni radicals—mostly ISIS currently—do the same to Shiites. In India, some Hindus abuse Muslims.

Moderate voices calling for peace and reconciliation have fallen silent in many countries when the world badly needs a global public square where freedom of religion and belief for people of all faiths (and none) is built.

Miroslav Volf of Croatia in his excellent book, “Exclusion and Embrace,” says: “There can be no peace among nations without peace among religions. Since religious peace can be established only through religious dialogue … reconciliation between the peoples depends on the success of the inter-religious dialogue.”

In March this year, 140 parliamentarians from around the world gathered in Berlin for the Inter-Parliamentary Conference for Combating Antisemitism, hosted by the German Foreign Office and its Bundestag. “The fight against antisemitism is our common duty as a state and as citizens,” said Chancellor Angela Merkel, emphasizing that there is no place in Germany for hatred directed against Jews or any other form of xenophobia.

A recent BBC television special, “Never Again: Fear and Faith in Paris,” focused on antisemitism in France and the U.K. One point made was that by teaching positively about all faiths in British schools, spiritual diversity is respected generally.

There are hopeful signs. A Muslim in Bradford, U.K., donated to the restoration of a synagogue and then joined its council.

In France, in a kosher store where violence occurred, lives were saved by a Muslim employee who hid Jewish customers in the basement.

Londoners have elected their first Muslim mayor, Sadiq Khan, a former human-rights lawyer, who said: “Whether it’s [ISIS] or these others who want to destroy our way of life and talk about the West, they’re talking about me. What better antidote to the hatred they spew than someone like me being in this position?”

The desecration of Jewish synagogues and cemeteries has tragically increased in recent years around the world. Across the United States, the Anti-Defamation League reported 912 antisemitic incidents in 2o14; across Canada, approximately 1,600 incidents were reported. Silence can easily be seen as endorsement of such acts.

Raoul Wallenberg’s courage and actions in Budapest in 1944 over seven decades ago pointed the way to a better future for all. He stood up in a dire situation to draw a line in the sand, saying, “One person can make a difference.” We need to remind ourselves of this constantly.