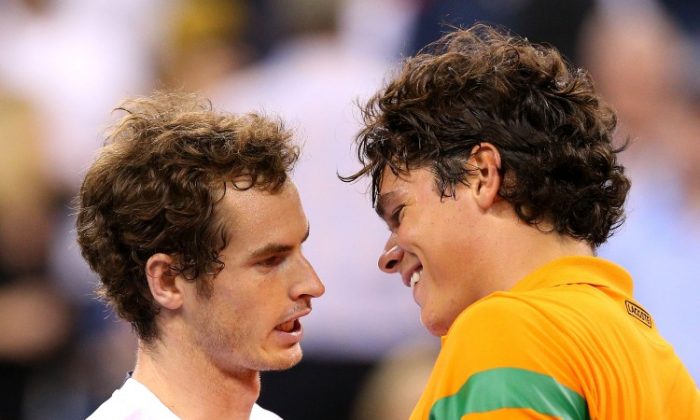 Milos Raonic (R) has words of praise for Andy Murray after their fourth round match at the US Open on Monday. (Cameron Spencer/Getty Images)
Sports

Raonic Overwhelmed by Murray’s Arsenal at US Open

Milos Raonic played some great tennis but came up against a juggernaut in Andy Murray on Monday in the fourth round of the US Open.

“I used a lot of variation tonight,” Murray said in an on-court interview with ESPN after the match. “I hit my passing shots very well.”

On dealing with Raonic’s massive serve, Murray explained his success. “I was just trying to react,” he said. “Sometimes you get lucky.”

Raonic hit his fastest serve of the match in the first set—140 mph down the middle in the deuce court, which Murray miraculously returned. Raonic had to hit a very good drop volley just to win the point. Normally, a 140 mph serve down the “T” is good enough against the vast majority of players.

Murray may have been lucky in some instances, but overwhelmingly, he was very, very good on Monday night.

“I tried to stay focused for every point and did a good job of that,” Murray said.

“He was just too good, unfortunately, because I was playing well,” Raonic said in his postmatch interview on usopen.org. “Not much I could do. I tried everything.”

Murray, the Olympic gold medalist who has yet to win a grand slam, was coming off a difficult four-set win over Spain’s Feliciano Lopez, whereas Raonic had a much easier time dismissing American veteran James Blake.

But after the threat of rain pushed up the start time of the match, Murray quickly established his superiority over Raonic.

The Scot took advantage of Raonic standing well behind the baseline with a number of successful drop shots in the early going. One such drop shot gave Murray the game’s first service break.

Murray kept Raonic off balance the whole evening. He never faced a break point, while breaking Raonic four times. Murray even cranked a serve at 138 mph while winning 69 percent of the points when Raonic had to hit a second serve.

“When I did get far ahead on critical moments, quite a few moments, he just did something I really have no answer for, something I haven’t really experienced,” Raonic said.

In fact, reaching the fourth round of a major is essentially a new experience for the promising Canadian. Only once before had he reached the second week of a major (Australian Open 2011).

Raonic, 21, hasn’t had too many opportunities against the game’s best players Roger Federer (three), Rafael Nadal (two), Novak Djokovic (none), and Andy Murray (now two, excluding walkovers). And this opportunity against Murray was his first in a best-of-five grand slam match against one of the game’s four best.

It was also his first match on the world’s largest tennis stage—Arthur Ashe Stadium. Raonic did note the windy conditions from all sides but overall he said, “It was fun. It was a great experience.”

And that surely applies to his 2012 US Open experience, which will be a valuable one in his ongoing development.