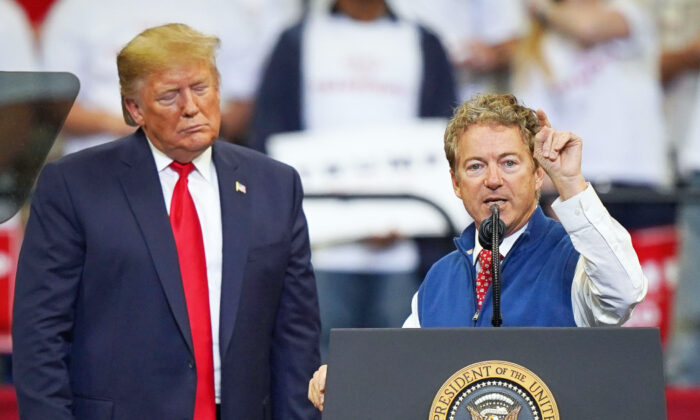 Sen. Rand Paul (R-Ky.) called for a repeal of the 100-year-old Espionage Act after the FBI’s raid of former President Donald Trump’s home on Aug. 8.

A longtime critic of concentrated state power, Paul argued on Twitter that the Espionage Act of 1917 has long “been abused” and was used to jail World War I dissenters.

“It is long past time to repeal this egregious affront to the 1st Amendment. Repeal the Espionage Act,” the Kentucky Republican wrote on Twitter, posting an article by former libertarian presidential candidate Jacob Hornberger.

The Espionage Act was passed in June 1917 under President Woodrow Wilson’s administration, coming just weeks after the United States entered World War I. The act forbade relaying or copying information relating to defense with the intention of causing damage to the United States or to benefit other foreign nations.

Hornberger’s 2019 article argued that the Espionage Act was used to secure the criminal indictment of Julian Assange, who is currently detained in the United Kingdom and fighting an extradition order to the United States.

“Some news media commentators are finally coming to the realization that if the Espionage Act can be enforced against Assange for what he did, it can be enforced against anyone in the press for revealing damaging inside information about the national-security establishment — i.e., the Pentagon, the CIA, and the NSA. Therefore, they are calling on the Justice Department to cease and desist from its prosecution of Assange,” according to the article.

Paul made reference to the Espionage Act over the past weekend after a search warrant used to authorize the FBI search of Trump’s Mar-a-Lago claimed the former president is being investigated for alleged violations of the 1917 law. The warrant also said the FBI is targeting him for possible obstruction of justice.

While the warrant and property record were both unsealed on Aug. 12 by U.S. Magistrate Judge Bruce Reinhart, the affidavit hasn’t been released to the public. Meanwhile, both the Department of Justice and the FBI have not issued public statements on why the raid was carried out.

In a brief news conference on Aug. 11, Attorney General Merrick Garland said he personally approved the FBI search but declined to comment further.

The record showed that allegedly classified material, including so-called “top secret” documents, were recovered from Trump’s home. Trump last week said on social media that documents the FBI allegedly seized were “all declassified” and agents “could have had [the documents] anytime they wanted without playing politics and breaking into Mar-a-Lago.”

He added, “It was in secured storage, with an additional lock put on as per their request.”