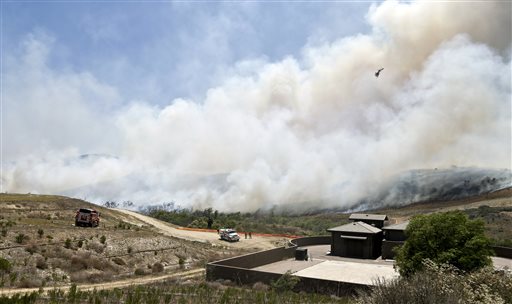 Smoke rises from a canyon where a wild fire is burning Tuesday, May 13, 2014, in San Diego. Wildfires destroyed a home and forced the evacuation of several others Tuesday in California as a high-pressure system brought unseasonable heat and gusty winds to a parched state that should be in the middle of its rainy season. (AP Photo)
US

Residents in multiple areas of San Diego County in California were forced to evacuate on Tuesday as a huge wildfire scorched more than 700 acres.

The wildfire prompted evacuation orders for more than 20,000 homes on the outskirts of San Diego and another 1,200 homes and businesses in Santa Barbara County 250 miles to the north.

Dozens of firefighters are trying to step the flames.

Santaluz resident Chuck Dawson said he watched as flames threaten his home. “The heat is ferocious as you get close to it. In fact, it probably came within 25 feet of our house. Luckily we had about 30 firemen who barricaded it and it burned all the way around, but we’re safe,” he told NBC.

No homes were reported damaged in either fire, but hundreds were considered threatened. The rugged terrain and unseasonably warm temperatures made firefighting even more difficult.

Black and gray smoke billowed over the area, filled with whirling ash and embers that created small spot fires. Flames crept within yards of some homes before firefighters doused them.

On one road, people on bicycles and skateboards stopped to watch as a plane dumped water on flames a half-mile away. At least two high schools and three elementary schools were evacuated.

A lone tree stands in the path of approaching flames as wild fire burns through a canyon Tuesday, May 13, 2014, in San Diego. Wildfires destroyed a home and forced the evacuation of several others Tuesday in California as a high-pressure system brought unseasonable heat and gusty winds to a parched state that should be in the middle of its rainy season. (AP Photo)

Firefighters look on as a helicopter drops water on a wildfire in the Rancho Santa Fe neighborhood Tuesday, May 13, 2014, in San Diego. Wildfires pushed by gusty winds chewed through canyons parched by California’s drought, prompting evacuation orders for more than 20,000 homes on the outskirts of San Diego and another 1,200 homes and businesses in Santa Barbara County 250 miles to the north. (AP Photo)

Cameron Stout, filling his tank at a gas station, got a text from his wife shortly after noon saying that she was packing up and leaving with the family’s pictures, laptops and other valuables. Their next-door neighbor’s home burned in a fire 15 years ago, he said.

“This area’s been through this before,” he said. “I thought the recent rains would have prevented this from happening. But after a couple days of 100 degrees, it’s reversed all that.”

Katy Ghasemi, 14, was held for hours in her high school classroom before the school let the children go home. Students studied, ate lunch, did yoga and looked out the windows at the fire.

“There were a lot of flames. Some were right near the front gate,” she said.

Another fire in southern San Diego County destroyed a mobile home before it was extinguished.

Meanwhile, in the Santa Barbara County community of Lompoc, 1,200 homes and businesses were under an evacuation order from a fire that quickly grew to more than 500 acres.

There were downed power lines and heavy brush in the area, said David Sadecki of the Santa Barbara County Fire Department.

A half-dozen other blazes statewide all remained small, said Daniel Berlant, a spokesman for the California Department of Forestry and Fire Protection.

Record high temperatures were predicted throughout much of California for the next two days. San Diego’s high of 94 on Tuesday tied a 1979 record.

The combination of high heat, low relative humidity and Southern California’s notoriously gusty Santa Ana winds prompted Los Angeles and neighboring cities to activate parking restrictions in certain areas to make sure emergency vehicles could get through if fires erupted in dry brush.

Months of drought have left much of the landscape ready to burn. Downtown Los Angeles has recorded just 6.08 inches of precipitation with little time left in the July 1-June 30 rain year. That’s less than half its annual average rainfall.

“Fire season last year never really ended in Southern California,” Berlant said. His agency has responded to more than 1,350 fires since Jan. 1, compared with an average of 700 by this time of year.

[View the story “bf” on Storify]