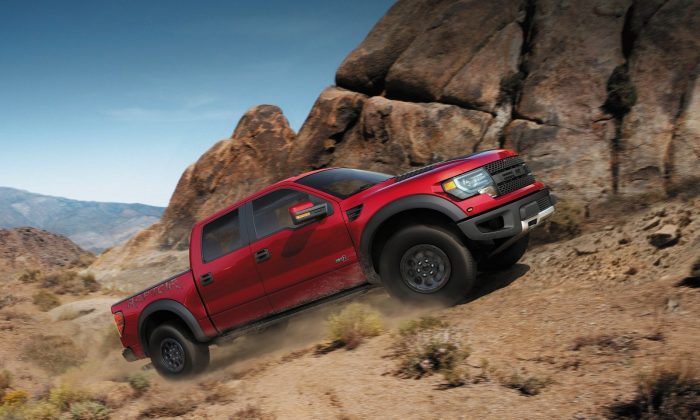 The 23rd TAWA Truck Rodeo, held at the historic Knibbe Ranch near San Antonio Oct. 11–12, was extremely competitive this year.

Four new pickup trucks competed for the off-road shootout at the Knibbe Ranch: the all new Chevy Silverado, the best-selling Ford F-150, the Toyota Tundra 1794 edition (the only truck made in Texas), and the Ram 1500.

Some 40-plus hard-driving TAWA members evaluated the vehicles both on and off road while climbing rocks, crossing creeks, and even pulling trailers.

The 2014 Ram 1500 offers a new 3.0-liter EcoDiesel engine that delivers a best-in-class fuel efficiency – greater than 25 mile per gallon, unsurpassed torque and up to 9,200 pounds of towing capability.

Reid Bigland, President and CEO, Ram Truck Brand, said “The Truck of Texas award means a great deal to us. Your comments and votes provide the feedback and encouragement that Ram needs to continue to raise the bar and develop trucks that offer the most appealing combination of features that Texans are looking for.

“And when it comes to fuel economy, capability, technology, and durability, we’ll continue to bring our ‘A’ game so that your readers, listeners, and viewers benefit.”

The 2014 Jeep Grand Cherokee offers a new EcoDiesel engine with best-in-class 30 mpg highway and an unmatched driving range of more than 730 miles.

“Everyone that we talked to down here has come up to us and said how great the trucks have been towing with it or driving with it on the course,” Bob Hegbloom, Ram brand manager, said following the announcement.

“It starts with Truck of Texas. To win this award really validates that what we’re bringing to market are the right things and we’re on the right path.”

Several TAWA members commented on how helpful it was to have so many engineers from the competing companies available to answer their questions. It also aided the evaluation process to have side-by-side comparisons for towing capabilities.

“The members of the Texas Auto Writers Association have always enjoyed the Texas Truck Rodeo,” said Michael Marrs, TAWA president. “It’s a unique chance to compare vehicles back-to-back in a timely manner on the same course and provide honest, real-time feedback to our industry partners.”

“The Ram, Jeep and Dodge brands from Chrysler Group clearly impressed our TAWA members at this year’s event,” Marrs added. “There’s no doubt that innovative powertrains, impressive designs and new technologies are paying off for these brands.”

Winning the title of Crossover Utility Vehicle (CUV) of Texas was the 2013 Hyundai Santa Fe.

Hyundai’s vice president Corporate and Product Planning Mike O’Brien said, “We are very pleased the 2013 Hyundai Santa Fe has been named ‘CUV of Texas’ and proud to see that the Santa Fe family continues its winning streak at the Truck Rodeo.

“Given the fact that Santa Fe Sport was named Compact Crossover at last year’s Rodeo, TAWA members have further confirmed the amazing versatility of this crossover with its five-, six-, or seven-passenger configurations.”

Another consecutive title, for off-road pickup, was won for the fifth year by the 2014 Ford F-150 SVT Raptor.

“Members of Texas Auto Writers pushed Raptor to the limit on one of the most rugged off-road courses in Texas,” said Doug Scott, Ford truck group marketing manager. “Raptor again showed why it’s the most capable off-road pickup in America, as well as America’s favorite.”

The Texas Auto Writers Association, Inc. was founded in 1985 by automotive journalists who wanted to provide an avenue of professional growth, development, and networking. These professionals sought to create an automotive event that was unique to Texas, and the result was the “Texas Truck Rodeo.”

The Rodeo was created by Tim Spell and named by Tom Wolfgang. Since 1992, Truck Rodeos have been held in San Antonio, Houston, Dallas, Fort Worth, Granbury, and Spring Branch.

In 2003, TAWA created an event for sedans, sports cars, and other vehicles not eligible for the Truck Rodeo. The TAWA Spring Challenge, as it was originally known, was held in the Texas Hill Country near Austin.

The Texas Auto Roundup, as the event is called today, is held at the Texas Motor Speedway in Fort Worth. For more information, visit www.texasautowriters.org

Jo Ann Holt is a journalist and car columnist based in Dallas and a member of the Texas Automobile Writers Association (TAWA).