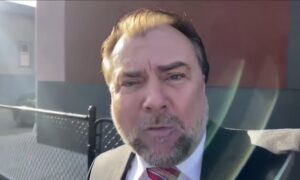 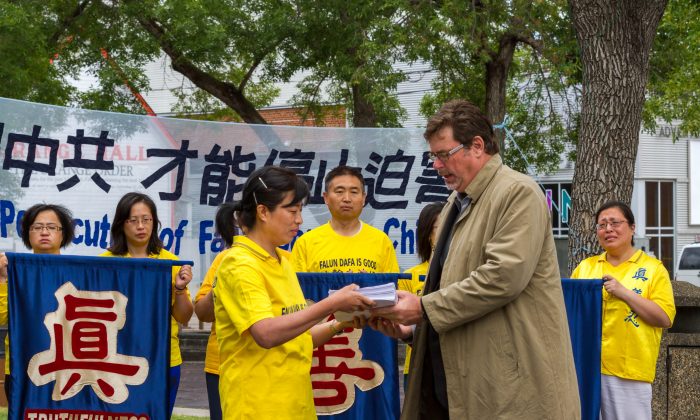 Dr. Minnan Liu (L) of the Falun Dafa Association of Edmonton presents over 4,000 signatures from Edmontonians on a petition to Brent Rathgeber, MP for Edmonton-St. Albert, on July 19, 2014 at the Dr. Wilbert McIntyre Park in Edmonton. The petition asks the Canadian government to urge the Chinese regime to stop the persecution of Falun Dafa in China. (Frank Liang/Epoch Times)
Canada

EDMONTON—As the clouds began to disperse over the bustling area around Edmonton’s Farmers’ Market on Saturday, a group of people in yellow T-shirts began meditation, while a few others from the same group held banners.

Falun Gong practitioners in Edmonton can be seen at the Dr. Wilbert McIntyre Park near the Old Stratchona Farmers’ Market every Saturday year-round, from the cold days of the prairie winter to the sunny days of the city’s gorgeous summer, quietly meditating and raising awareness about the group’s persecution by China’s communist regime.

This past Saturday, July 19, the event was held on a greater scale, with speakers lined up to mark the 15th anniversary of the persecution of the practice in China.

It was on July 20, 1999, that then-leader of the Chinese Communist Party Jiang Zemin formally launched a persecution campaign against the peaceful practice, whose adherents follow the three principles of truthfulness, compassion, and forbearance.

The persecution has resulted in mass imprisonment, torture, and the documented deaths of thousands, although the actual number is feared to be much higher. Since the mid 2000s, reports have also emerged about state-sanctioned organ harvesting from living Falun Gong practitioners, who die during the process.

“I’ve been a member of Parliament for about six years, and before I got to Ottawa, I wasn’t very familiar at all about the plight of Falun Gong practitioners’ persecution and forced organ harvesting,” said Brent Rathgeber, MP for Edmonton-St. Albert, at the event.

Rathgeber, who is also the chair of the Parliamentary Friends of Falun Gong, said events like the one on Saturday help people learn about the grave human rights abuses that Falun Gong practitioners in China are suffering.

“I encourage you to keep up the work. Your message is not lost on your government, and your government needs to put pressure on the Chinese government to end these horrific acts,” he told the practitioners gathered at the event.

This support is what Edmonton Falun Gong adherent Robin Li is hoping for. Li’s sister, Hong Li, was arrested by Chinese authorities in 2012 for speaking about the persecution of Falun Gong online and on her phone, and was sentenced to three and a half years in prison at a trial that occurred in February this year.

Noting that his sister is currently imprisoned in the Shenyang Women’s Prison of Liaoning Province in China, Li said it is a notorious prison for persecuting Falun Gong practitioners, and Liaoning Province is where there have been reports of forced organ harvesting.

“I hope that the Canadian government and international communities can take action and help rescue my sister as quickly as possible, since her life is in danger and my parents are suffering tremendously,” Li said in an emotional speech.

Ratgeber said he will present the petitions in September when Parliament reconvenes.