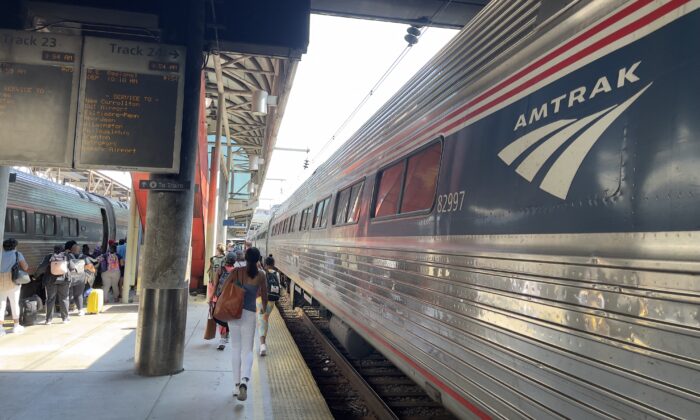 Passengers walk along an Amtrak train on a track at Union station in Washington on July 18, 2021. (Daniel Slim/AFP via Getty Images)
US News

A passenger train racing across long empty stretches of American plains may be iconic, but it’s an economic anachronism, experts say.

Even so, the Senate’s infrastructure bill would allocate $66 billion toward the repair of Amtrak lines—nearly 60 cents to Amtrak for every dollar the bill put toward highways.

But vast amounts of government aid has kept long-distance passenger train travel running long after it became economically implausible, according to O’Toole.

Before 1980, railroads were highly regulated. But they had a problem. Long and unprofitable passenger train routes were draining their funds, according to O’Toole.

To cancel a route, train companies had to lobby for approval from every state on the route, he said. It was almost impossible to end a train route that passed through multiple states.

To save railroad companies from being drained by passenger routes, the federal government created Amtrak in 1970 to run 20 passenger railroads.

Amtrak is privately controlled but owned by the federal government. It gets money from passengers as well as state and federal funding. At first, legislators wrote that Amtrak should try to make a profit. It has never succeeded in doing so.

In 2020, Amtrak received $342 million in state subsidies and $2 billion in federal grants. Since its founding, it has received about $45 billion from the federal government.

Today, Amtrak runs routes on 21,400 miles of railroads, most of which don’t make enough money to support themselves. The 450-mile Northeast Corridor accounted for 52 percent of the company’s revenue, according to Amtrak’s figures.

One problem with Amtrak is that most of the 500 cities it serves don’t generate enough passengers to pay for the service, critics say. More than half of Amtrak’s passengers get on and off the train from only nine cities.

The Northeast Corridor is the only profitable rail line in the company, said Tom Schatz, president of Citizens Against Government Waste (CAGW).

Instead of demanding results and accountability from Amtrak, the government continues to give Amtrak more money, according to Schatz.

“As part of the ‘We Give Up’ aspect of the budget resolution, Congress includes language that says Amtrak cannot shut down any long-distance lines, they must have an on-site ticket agent if 40 or more passengers per day buy tickets at a location, and there are no labor provisions,” Schatz said.

Schatz said that the infrastructure bill seems to accept that Amtrak is poorly run and inefficient.

Compared to other transportation, Amtrak falls far behind in revenue received and service delivered, O’Toole said.

America’s freight rail system is privatized, well-managed, and profitable, experts say. But passenger rail has been outcompeted by new technologies.

Those statistics deceive, O’Toole said. Although other mass transportation industries only count their fares as revenue, Amtrak also counts state subsidies as revenue. If only money paid by passengers were counted, Amtrak would receive far less revenue per passenger mile.

Aside from that poor performance, Amtrak carries Americans only .1 percent of all miles they travel, O’Toole said. Even Amtrak routes between population centers and popular destinations have failed to compete with other transportation.

Many people want to visit Las Vegas from Los Angeles, according to O’Toole. An Amtrak route between the cities would cost about $45 per ticket. But bus trips and cheap airlines both cost only $20. Cost has favored planes over trains since 1990.

“Passenger trains are obsolete. They’re obsolete because they cost so much. They cost a lot of money. That’s why people stopped riding them,” he said.

One argument for Amtrak’s usefulness is that trains serve some people that cars can’t help, he said. The elderly, those with disabilities, and those with young children might struggle to take a car trip. Ending Amtrak services to rural America would leave these people stranded.

Also, once a small town gets disconnected from U.S. transportation networks, it often dies, Jeans-Gail said. Small towns sometimes rely on federal transportation networks. As well as Amtrak, the federal government subsidizes air flights to 153 communities that airlines can’t profitably serve. This program is often wasteful in dollars spent, but it keeps small communities alive and connected to the rest of the United States.

The RPA’s website argues that although Amtrak’s lines aren’t profitable, they still generate more economic benefits than taxpayers pay. The Amtrak line from Chicago to Idaho contributed to $326.7 million in economic benefit.

Despite those benefits to rural communities, the fact is that Amtrak’s most frequent users are upper-middle-class professionals, said Mike Palicz, the federal affairs manager on transportation, infrastructure, and energy for Americans for Tax Reform.

“It’s no surprise what the Northeast Corridor is for,” Palicz said. “We know why people like traveling from New York to D.C. It’s middle-class and upper-middle-class professionals who are using rail as a form of transportation. The idea that this is about helping the underprivileged is not a correct narrative.”

The Northeast Corridor benefits the people along its length, according to passengers at New York’s Penn Station.

AMTRAK rider Mariah Green said that she started riding Northeast Corridor trains during the COVID-19 pandemic after prices dropped. Before that, she rode buses. Although the service tends to be hit or miss, it’s cheaper than airlines if she purchases tickets in advance, she said.

“During COVID, it made it affordable to take the train,” Green said. “But now the prices are back to where they were. So I try to get the ticket as early as possible so I can get a cheaper price.”

“To tell you the truth, it’s a long train ride on AMTRAK,” he said. “I drive. But for people who can’t afford cars, can’t afford to fly, I guess AMTRAK is the only way to go.”

Although the Northeast Corridor will get the most funding from the infrastructure bill, O’Toole said the funding it receives will only maintain current infrastructure.

To improve the Northeast Corridor, Amtrak has previously requested $117 billion. Only $20 billion of the $66 billion in Amtrak spending included in the infrastructure measure is allocated to this route.

To make a real improvement in Amtrak service on the Northeast Corridor, President Joe Biden should give the passenger train service nearly twice as much money, O’Toole said. Otherwise, the program will remain a waste.

“Where’s the other $97 billion going to come from?” he asked.

“The idea that transportation should make a profit is important, because profits are symptomatic that we’re producing something that people want.”