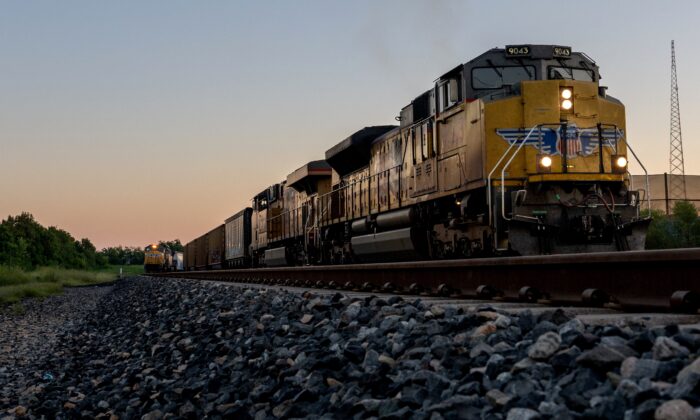 The threat of a U.S. freight rail strike remains possible, as some rail unions have yet to ratify last week’s tentative deal reached by their leadership, with some local members already rejecting the terms.

If just one of the unions decides to reject the brokered deal, the agreement would collapse and strikes may begin.

The Biden administration mediated a deal directed by Labor Secretary Marty Walsh between railroad executives and union leaders, in order to avert a national rail strike and service shutdown that would have threatened to disrupt most rail operations throughout the nation and wreak havoc on the economy.

The tentative agreement was negotiated on behalf of the 60,000 unionized U.S. rail workers by the unions representing train engineers and conductors.

Last week, after 20 hours of negotiations, both parties were able to reach a tentative deal on Sept. 14, temporarily averting a strike.

Negotiators had until Sept. 16 to reach an agreement to avoid a strike, which many experts warned would have been a major economic disaster and a political headache for the White House ahead of November’s midterm elections.

A rail shutdown could have suspended 30 percent of U.S. cargo shipments by weight, costing the American economy as much as $2 billion a day.

This would would hit an economy already wracked by inflation, causing prices to spike in all categories, ranging from consumer goods to energy.

President Joe Biden called the deal “a win for tens of thousands of rail workers who worked tirelessly through the pandemic to ensure that America’s families and communities got deliveries of what have kept us going during these difficult years.”

Some analysts said that brokered deal by the Biden administration would only encourage more strikes in the future.

“This is a very, very contentious time,” said Michael Lotito, co-chairman of the Workplace Policy Institute at Littler, to The Wall Street Journal. “I think that is going to embolden unions to ask for more.”

On the other hand, many workers were not pleased by the results.

An organizer for Railroad Workers United, Ron Kaminkow, for example, told The Daily Mail that the average rail worker felt “a lot of anger, confusion, and hostility” toward the deal.

The Transportation Communications Union and Brotherhood Railway Carmen Division, which represent more than 11,000 rail workers, were the first to announce their ratification of the deal.

Meanwhile, SMART Transportation Division and the Brotherhood of Locomotive Engineers and Trainmen also came to a tentative agreement on Sept. 15, stating  that “for the first time our unions were able to obtain negotiated contract language exempting time off for certain medical events from carrier attendance policies.”

Further, “Our unions will now begin the process of submitting the tentative agreement to the rank and file for a ratification vote by the memberships of both unions.”

While ratification by the other unions were still pending, the 5,000 members of the International Association of Machinists and Aerospace Workers District 19 voted to reject the tentative agreement.

“The tentative agreement has been rejected and the strike authorization vote was approved by IAM District 19 members,” the Machinists’s union said in a statement.

“We look forward to continuing that vital work with a fair contract that ensures our members and their families are treated with the respect they deserve for keeping America’s goods and resources moving through the pandemic.”

However, the union did agree to postpone its strike until Sept. 29, in order to allow its fellow worker-members to vote and to gain more time for negotiations.

All 12 of the major rail unions likely will receive benefits from the concessions ceded by management if the new contracts are accepted.

Freight unions had rejected an earlier deal that although would have increased pay, it however failed to address working schedules, which claimed harshly penalized workers for taking off sick or attending family emergencies.

The unions also said that working hours and schedules for freight workers were lengthy and irregular. All of these complaints led the the rail workers to threaten a nationwide strike until conditions were immediately improved.

Passenger rail also was temporarily affected, with Amtrak cancelling all of its long-distance routes, on Sept. 14, to avoid potential disruptions in case negotiations had failed.

The agreement, if ratified, will implement the Aug. 16 recommendations of Presidential Emergency Board No. 250.

The new contracts would give rail workers a 24 percent wage increase for the five-year period from 2020 through 2024, along with an immediate payout with an average of $11,000 per employee—if the deal is ratified—the Association of American Railroads told Fox Business.

The lump-sum payment alone will cost the railroad companies some $660 million.

The railroads granted an additional paid leave day a year for all rail staff, and allowed them to take unpaid medical leave without penalty under the old attendance rules.

Rail workers currently pay about 12.6 percent of the total cost of the plan, which is $228.88 a month for their health insurance.

However, they will now have to pay out more for their health insurance costs, but their premiums will be capped at 15 percent of the total cost of the insurance plan.

If one of the unions decides to go on strike, the other unions will likely honor the other union’s decision and refuse to break the strike line, which will lead to trouble for U.S. supply chains.

There are still a few things that can be done to prevent a major rail strike if the other unions refuse to validate the tentative agreement. Congress, for example, could still intervene before a strike occurs in order keep rail system running and to secure the supply chain.

The unions and management could also agree to a last-minute arbitration meeting, also known as “baseball arbitration,” in which an arbitrator would review the arguments presented by both sides before ruling in favor of one party over the other.

Vote counting is expected to continue well into October.