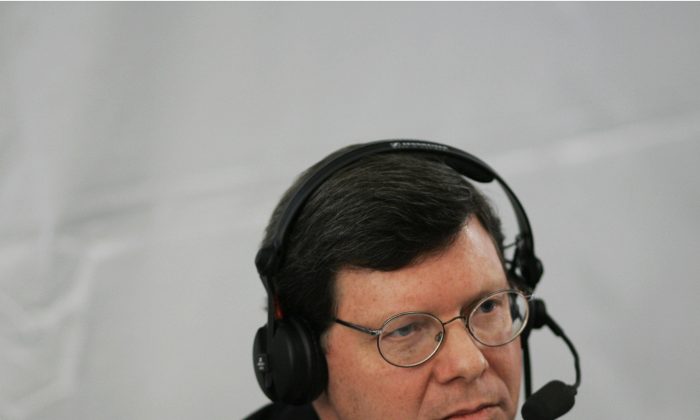 Charlie Sykes of WTMJ in Milwaukee, WI broadcasts live 24 at an event for radio talk shows at the White House in Washington, DC. in the file photo. (MANDEL NGAN/AFP/Getty Images)
2016 race

After Wisconsin Gov. Scott Walker endorsed Ted Cruz for president, it appeared Walker was leading the #NeverTrump movement in the state. But an influential AM radio host was a step ahead.

Charlie Sykes hosts a three-and-a-half hour program on the state’s largest AM radio station, and has been a prominent voice for conservatives in the state for 23 years.

In the current election cycle, Sykes has been leading the charge against Donald Trump ahead of Wisconsin’s April 5 primary.

The radio host had Trump on his program March 28 and grilled the Republican frontrunner for 17 minutes about going after the wives of candidates.

Politico reports that Sykes left the interview “even more unimpressed with the New York billionaire than he was going in,” and pointed out that Trump didn’t appear to know who the radio host was.

Previously, Trump had mentioned Sykes’ ex-wife, Judge Diane Sykes, as a possible nominee to replace Justice Scalia, and Sykes expected him to bring her up.

“He had no idea,” Sykes told Politico on Wednesday. “I think someone handed him a card with her name on it. He never made the connection.”

Some of the pushback from Trump is a result of Sykes’s influence, argues Wisconsin Republicans, who say that the radio host’s support for Republicans Scott Walker and Ron Johnson led to successful campaigns.

“Sykes has had a big hand in creating Scott Walker and Ron Johnson, who was a nobody,” said Matt Batzel, executive director of the conservative advocacy group American Majority Wisconsin.

The radio host has been advocating for Ted Cruz in the upcoming primary, and latest Marquette poll numbers show a decided swing in Cruz’s favor, who is now 10 points up on Trump.

“Sykes is one of the leading factors, if not the leading factor, as to why Cruz is surging,” said Mark Graul, a GOP strategist who oversaw George W. Bush’s 2004 Wisconsin campaign. “The trusted, respected conservative voices in the state have been anti-Trump from the start, and they’ve become very pro-Cruz in the last few weeks.”

Ted Cruz Jokes About Running Donald Trump Over With a Car

While he has advocated for a Ted Cruz vote, the host admits that it’s less of a vote for Cruz and more of a protest against Trump.

“I’m more anti-Trump than pro-Cruz,” he said explaining that Cruz isn’t the first or second pick for Wisconsin, but compared Trump to a “cartoon character” stereotype of conservatives created by the left.