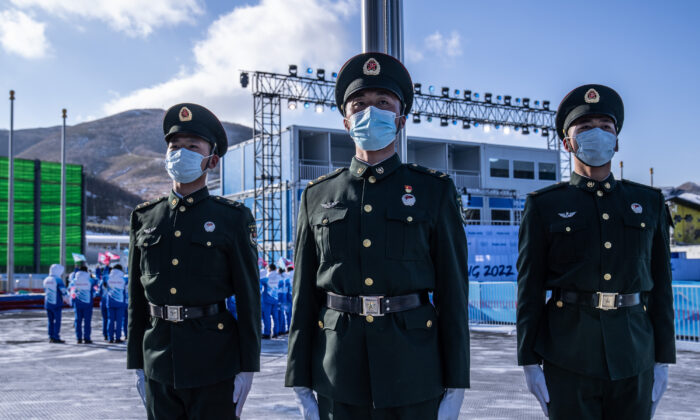 China’s communist leaders have clamped down on coverage and commentary of the Winter Olympic games. Ask Dutch correspondent Sjoerd den Daas, who was manhandled by a security guard during a live report. The dictatorship has attempted to gag foreign athletes, banning mention of Chinese aggression (e.g., territorial theft in Asia) and repression of domestic minorities.

In an April 2020 column discussing Xi Jinping’s “Four Confidences,” I interpreted his “confidence in culture” dictum to mean confidence in ethnic “Han Chinese culture as curated by Beijing’s 21st-century urban communist authoritarian elites … it stinks of ethnocentrism, which could be a euphemism for racism.”

The Han matter. China’s estimated population in 2017 was 1.4 billion and 90 percent were ethnic Han Chinese.

According to a newly available Pentagon analysis, deep-seated Han racism drives the cultural arrogance and vanity.

I owe Powerlineblog.com’s Steve Hayward a big thank you. In a detailed Feb. 7 post, Hayward discussed a 254-page study prepared for the Pentagon’s Office of Net Assessment and commissioned by its great director, the late Andrew Marshall.

The study, “The Strategic Consequences of Chinese Racism: A Strategic Asymmetry for the United States,” was apparently leaked to the internet. Someone redacted the author’s name but at one time he was a professor in Missouri State University’s Department of Defense and Strategic Studies.

The study’s four chapters and conclusion are too long and detailed to summarize. I’ll provide a sketch with quotes and paraphrase.

Chapter 2 “recognizes that China has been and remains a racist state” and “racists and eugenicist beliefs inform the Chinese worldview.” The author names names. “Racism remains a key component of how the Chinese see the world, their central place in it, and the world’s other, inferior inhabitants.” Ponder that.

Chapter 3 evaluates “nine strategic consequences of Chinese racism.” The author says the United States “must recognize … China is a racist state, closer to Nazi Germany than to the values upheld in the West.” Moreover, most Chinese don’t see their racism as a problem. They believe “racism is a Western phenomenon …”

Consequence 6: Racism can lead to overconfidence. The Chinese commonly “believe that they are cleverer than others” and can shape events subtly using ‘shi,’ a “strategy of strategic cleverness.” More: “In their self-image, the Han are more cunning and virtuous than the rest. The United States, in contrast, is easily manipulated, although strong and violent, just like an adolescent.”

In the world of statecraft, however, overconfidence breeds catastrophic mistakes—ask Adolf Hitler.

A yearning for Chinese imperial kowtow is another motivator: “Their expectation is of a tribute system where barbarians know that the Chinese are superior …”

Consequence 7 is a problem: “Chinese racism helps to make the Chinese a formidable adversary.” It provides a sense of unity and identity. And “China is not plagued by self-doubt or guilt about its past.”

Austin Bay
Austin Bay is a colonel (ret.) in the U.S. Army Reserve, author, syndicated columnist, and teacher of strategy and strategic theory at the University of Texas–Austin. His latest book is “Cocktails from Hell: Five Wars Shaping the 21st Century.”