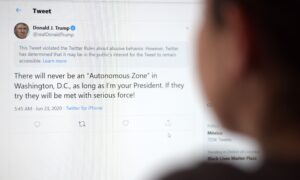 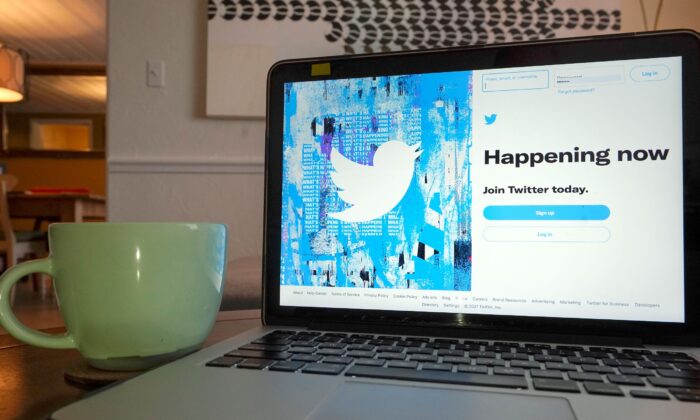 The login/sign up screen for a Twitter account is seen on a laptop computer in Orlando, Fla., on April 27, 2021. (John Raoux/AP Photo)
Viewpoints

That political commentator Dave Rubin of “The Rubin Report” has been locked out of Twitter for writing something that is at the very least arguably true—that there are serious questions about the COVID-19 vaccines—is among the most unsurprising news of the day.

It’s what Twitter does on a regular basis—censors opinions it doesn’t agree with from sources high (the 45th President of the United States) and low (just about anybody).

Rubin’s supposed malfeasance was to write the following, which was deleted: “They want a federal vaccine mandate for vaccines which are clearly not working as promised just weeks ago. People are getting and transmitting Covid despite vax. Plus now they’re prepping us for booster shots. A sane society would take a pause. We do not live in a sane society.”

I would agree, but that’s not the point. The point is Twitter’s behavior.

Who can forget its banning of the NYPost’s fact-based report on Hunter Biden’s laptop? Twitter chief Jack Dorsey later apologized, but by then it was irrelevant. The electoral damage was done and the world had moved on. How convenient.

Meanwhile, legions of Little Dorseys, using who knows what algorithms and key words, form a phalanx of latter-day Blockleiters (block wardens) supervising what can or cannot be said in an often mercurial manner.

And yet, with all this, another legion, maybe even a majority, of leading conservative and libertarian politicians and journalists, comply with this regime in the hopes their voices will be heard.

This is weirdly similar to life under communism or other totalitarian regimes like Iran where people bent or bend over backwards, contorting or disguising their ideas, in order to get them past the censors to an oppressed audience. (Apropos Iran, Donald Trump is banned on Twitter, while Ayatollah Khamenei is not.)

Other times right-wing journalists and politicians are forthright with their opinions, waiting to see if they will be banned. Often they are not, but yet other times—as with Rubin—when they cross some (largely invisible and almost always moving) line, off they go.

Then they get to whine about their treatment for what was yet another completely unsurprising event and … nothing happens!

Nothing happens too on the national legislative front because Twitter is untouchable, shielded as it is by the far more powerful Facebook, Amazon, and Google—by far the biggest political donors—whose interests often coincide with Dorsey’s.

No, as with so much, this is for We the People to handle. (Kudos, though, to Florida’s governor DeSantis who has made inroads.)

Of the tech giants, Twitter is the low-hanging fruit. Too many small businesses depend on Facebook to easily destroy it. The same is true of Amazon that also controls publishing. (Trust me. I know. My books are all there and I have no control over them at this point because of standard author licensing agreements.)

As for Google? Well, if you can tell me how to destroy Google I’d be interested. We can use other search engines—and I do—but that’s in many ways our own form of virtue signaling. In reality, we’re not putting much of a dent in the giant.

Twitter, on the other hand, is vulnerable. If we destroy or seriously dent this weak sister, then we can go after her considerably stronger relatives.

How to do it? Just leave. Quit without saying sayonara. That implies “see you again.” Quit and stay quit. (Twitter will then wither away, like CNN.)

I realize how hard this is for many. Two, often intertwined, factors are at play: our egos and internet traffic.

The former is what it is. We have to deal with it in our all-too-human psyches and souls. It takes a long time and I’m still far from succeeding.

The latter has more immediate and arguable relevance. We want the opinions of our side seen by as large a public as possible. But do we want to do that at the behest of the very thing we are inveighing against? Doesn’t that make us hypocrites? Doesn’t that tarnish, even invalidate what we are saying?

And there are alternatives—Gab, GETTR, Parler, Tell and Mind, to name a few. None have caught fire in the way Twitter has, but that may be our fault.

Or, maybe we don’t need that means of communication at all. Maybe it’s just too 2010s and should now be dispensed with. I’m happy having my say here at The Epoch Times and enjoy very much reading the comments, which are often extraordinarily good.

Whatever the case, I am publicly calling on Dave Rubin to do something unusual and laudable, to tell Twitter to “stuff it.” They may have locked him out, but he’s not coming back anyway, even if they let him.

Or, to put it another way, since Jack Dorsey might know something of revolutionary history, Dave should be our version of Dolores Ibárruri (La Pasionaria) who, during the Spanish Civil War, famously said, “Better to die on your feet, than to live forever on your knees …. No pasaran! [They will not pass.]”

Yes, I know Dolores was a communist, but the shoe is on the other proverbial foot these days, and it is the new American communists who, with sites like Twitter leading the way, stand in opposition to “freedom and justice for all.”