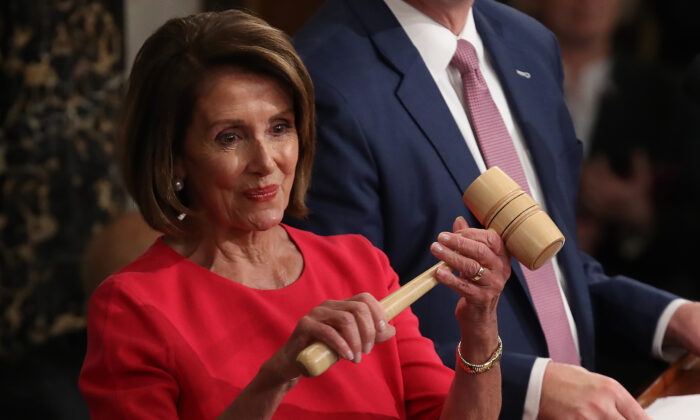 Speaker of the House Nancy Pelosi (D-Calif.) smiles after receiving the gavel from Rep. Kevin McCarthy (R-Calif.) after being elected as the next Speaker of the House during the first session of the 116th Congress at the U.S. Capitol in Washington on Jan. 3, 2019. (Win McNamee/Getty Images)
By Mark Tapscott

Closely guarded talks are taking place seeking a coalition in the 117th Congress to oust Nancy Pelosi (D-Calif.) as speaker of the House. Meetings are being held among House Republicans and 10 Democrats who voted against Pelosi becoming speaker in 2019.

“A serious effort is underway to prevent Pelosi from becoming speaker, backed by the GOP and Democrats who are disturbed by their party’s embrace of extreme rhetoric and policies like ‘defund the police,’” The Epoch Times was told on Dec. 30 by a veteran senior congressional aide who advises multiple members of Congress.

“The odds of success are less than 50-50, but it’s one of the more intriguing leadership challenges to emerge in recent decades,” said the aide, who spoke on condition of anonymity.

The aide declined to provide details of who from either party is participating in the negotiations because doing so would likely make it impossible for the talks to continue.

Pelosi earlier this week told reporters she believes she has the speakership “wrapped up.” The speakership likely will be decided when the 117th Congress officially convenes on Jan. 3, 2021.

Pelosi’s hold on the speakership—she became the first woman speaker in 2007 and remains the only woman ever to hold the powerful position she regained in 2019—could be jeopardized if the furtive talks succeed, because of the unexpected Republican gains in the November election and the 10 Democrats who previously opposed her being reelected.

Pelosi and other Democrats expected to gain 10 to 25 seats to add to the majority they won in 2018, but when the votes were counted, it was the Republicans who gained at least 10 seats. They also lead in the two remaining disputed races.

If all 432 House members who have uncontested elections from November show up physically as they are required to do by the Constitution, Pelosi would have to gain at least 216 votes to retain the speakership. The House currently has 434 members because of the death on Dec. 29 of Rep. Luke Letlow (R-La.)

But nearly two dozen House Democrats have stayed out of the nation’s capital for most or all of the past six months due to the CCP virus that causes the disease COVID-19.

One of them, Rep. Rick Larsen (D-Wash.), announced Dec. 23 that he tested positive for the virus and would therefore begin voting by proxy. Proxy voting isn’t allowed in the speakership vote on the House floor.

If other Democrats who have voted by proxy out of concern for the virus, the quorum required for the vote could be even lower. If the number reached 214, a coalition would only have to gain votes from four of the 10 Democrats and all 211 Republicans to defeat Pelosi.

A senior House Republican aide who asked not to be identified told The Epoch Times on Dec. 30 that “it’s no surprise that Democrats want to run away from Speaker Pelosi’s failed leadership. From her baseless impeachment to her needless delay of coronavirus aid, it’s clear she should not be speaker of the House.”

Democratic campaign strategists were unusually quiet about the prospect of a coalition potentially being formed against Pelosi.

A number of Republican strategists, however, had no hesitation at all in speaking, but their views were far from unanimous.

Brian Darling, former senior counsel to Sen. Rand Paul (R-Ky.) and founder of Liberty Government Affairs, told The Epoch Times on Dec. 30 that Pelosi’s vote-gathering skills are well-known, but may not be enough.

“The speaker needs a majority of those present and voting to garner a majority, and if a coalition votes ‘present’ as a protest vote, it is likely that the coalition can either negotiate with Pelosi for concessions on the rules and committee chairs or coalition with Republicans to elect a different speaker,” he said.

“The latter is unlikely, but if Pelosi loses on the first ballot, her power will be diluted, and she may just step aside for a new speaker.”

Matt Mackowiak, a Washington, D.C. and Austin, Texas-based GOP strategist who is also a veteran congressional aide, told The Epoch Times he doubts Pelosi will lose. “She will get the votes she needs, but it will be close.”

David Williams, president of the Taxpayers Protection Alliance, told The Epoch Times a Pelosi defeat could result in more cooperation and less divisiveness in the House.

“If this happens, hopefully it will mean that taxpayers will have a louder voice in the House and the extreme left wing of the Democratic Party will have less influence,” Williams said.

But Americans for Tax Reform President Grover Norquist said the coalition strategy makes no sense for Republicans’ long-term election prospects and could be dangerous for Democrats involved in the anti-Pelosi effort.

“Why would the Republicans want to put their fingerprints on the House leadership? Their goal is to highlight the left-wing, incompetent, failing Democratic leadership for the next two years,” Norquist said.

“Republicans want a bright, clear, differentiation between the Democrats and Republicans going into 2022 when there is every reason to believe the Republicans should then recapture the majority.”

Norquist also said that “playing in the other party’s leadership battles makes it hard to tell shirts from skins,” and he said that “any collection of Democrats who voted down Pelosi would be targeted for primary opposition. And even Democrats in Republican-leaning districts have left-wing primary majorities.”

Americans for Limited Government President Rick Manning pointed to the two Georgia Senate runoff elections that will be decided Jan. 5, 2021, as more important for Republicans than the Speakership contest.

“Pelosi is a master at putting 218 votes together for radical policies, and, given her success in holding her caucus together the past two years when many of them were representing districts won by President Donald Trump, I think the best way to stop the socialists is to defeat their two Senate candidates in Georgia and, at least temporarily, put a stake in their hearts,” Manning told The Epoch Times.