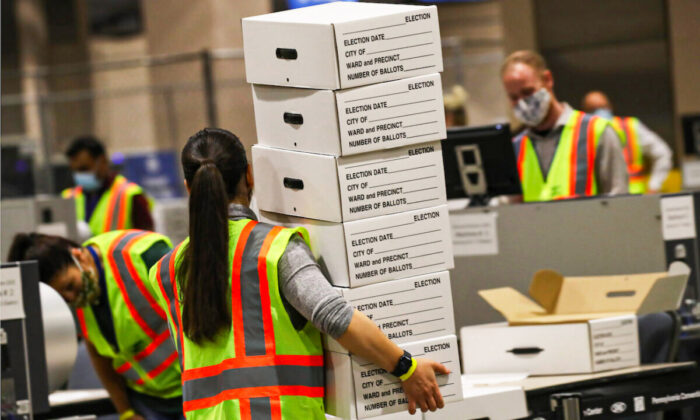 The certified 2020 election results in Pennsylvania show Joe Biden won with 80,555 more votes than Donald Trump. Then-Secretary of State Kathy Boockvar certified the vote on Nov. 24, 2020. Six days later, on Nov. 30, 2020, the state still had 784,752 more ballots than voters. That is nearly ten times more than Biden’s margin of victory.

That is according to Verity Vote, an election Integrity volunteer research group that compared data from the Pennsylvania Department of State and data direct from all 67 counties.

Starting on Nov. 30, 2020, Verity Vote requested from the Department of State the weekly Full Voter Export from the Statewide Uniform Registry of Electors (SURE).

But that is the opposite of what is expected in election results. It is expected that faulty ballots will be kicked out, Heather Honey of Verity Vote told The Epoch Times, and that normally leaves more voters than ballots, not the other way around.

There are legitimate reasons for the number of ballots and the number of voters not to match. For example, a voter may vote for too many candidates in one race. In that case, none of the votes in that race count, but other races on the ballot, if properly marked, would count, Honey said. Or a voter may make a mistake and ask for a new ballot.

Pennsylvania law specifically says when the ballots exceed the total number of persons who voted, “such excess shall be deemed a discrepancy and palpable error, and shall be investigated by the return board, and no votes shall be recorded from such district until such investigation shall be had.”
Put simply, these discrepancies can’t be counted until they are investigated.

But they weren’t investigated before the election was certified. The Pennsylvania Department of State did not respond to questions for this story.

It is worth noting that governments don’t keep records forever. They have retention schedules that guide when to destroy documents to make room for new ones.

In Pennsylvania, as of September 2022, counties can legally destroy the paper ballots and documentation related to the 2020 election, ending any chance of explaining election irregularities that have troubled so many voters, and spurred many to rally at the U.S. Capitol on Jan. 6, 2021.

Soon after the 2020 election, three Pennsylvania moms, Toni Shuppe, Karen Taylor, and Jamie Sheffield, launched an online petition calling for a full forensic audit of Pennsylvania’s election results. In four months, the petition had over 100,000 signers. That was the beginning of their organization, Audit the Vote PA. But because of the looming retention schedule, they doubt their questions will be answered.

Last week they launched a new petition, calling for the results of the 2020 election to be decertified.

“We can’t ignore it because the laws were broken certifying the election, which now shows that the anomalies, irregularities, and potential fraud, far outweighs the margin of victory,” Audit the Vote PA CEO Toni Shuppe told The Epoch Times. “How do we move forward knowing that our votes are going to count, without investigating, analyzing and decertifying something that we know was not legitimate?”

Audit the Vote PA has spent months going door to door, interviewing voters. In this process, and by pouring over data provided by counties and the Pennsylvania Department of State, they found a number of discrepancies.

When door-knocking, they asked how many people at that address voted in the 2020 election, and compared it to the records obtained at the county level. Often they found more people registered and voted from the address than the number who lived there.

“We are able to show the person at the door: this is what’s on record at the county as people being registered at your address. Can you confirm if this is accurate? And almost every single time, the owner says it’s not accurate,” Shuppe said. “The owner will say, ‘That’s me, that’s my wife, that’s my daughter. I don’t know who the rest of these people are.’ Or, ‘those people were the previous owners but we’ve lived here 10 years.’ Or, ‘that was a previous tenant but I’ve been here since 2018.’ There’s almost always a discrepancy.”

Shuppe says their canvassing efforts have proven that something is amiss.

“We have a really good idea of how they meddled in the 2020 election. We can’t quite pinpoint exactly who did it or what their methodology was, or exactly how they pulled it off, but we know that our voter rolls are severely inflated.”

The group also looked at voter registration and broke down statistics by number. Each county’s discrepancies are listed on the Audit the Vote PA website.

For example, in Pike County, between 2016 and 2020, there was a 6.1 percent increase in Democrat voter registrations, but Biden got 40 percent more votes than Democrat Hillary Clinton.

In Tioga County, there was a 15.6 percent decrease in registered Democrat voters, yet in this county, Biden got 27 percent more than Clinton.

Another Kind of Meddling

State Sen. Doug Mastriano, a Republican now running for governor, signed both petitions from Audit the Vote PA and was an early supporter of looking into the election. It drew national attention and raised his profile.

“The day before Thanksgiving in 2020, I hosted the Senate Majority Policy Committee hearing in Gettysburg where hours of testimony were presented. Even after the hearing, which commanded the nation’s attention, the left and members of the media refused to acknowledge there is widespread election fraud in Pennsylvania,” Mastriano told The Epoch Times. “We are living in the storied tale of ‘The Emperor’s New Clothes.’ What is so plain and obvious, that even a child can see it, is being denied wholesale.”

“Instead of looking into the allegations, the legacy media maligns those asking questions,” Mastriano said. “The political ruling class not only refused to conduct an audit, but took the added step to sabotage my endeavor to conduct a forensic investigation last summer. The people of Pennsylvania deserve answers and confidence that their vote counts.”

Republican State Sen. Jake Corman is president of the Senate and also running for governor. He has not signed the Audit the Vote PA petitions.

In August 2021, Corman used his authority as Senate president to remove Mastriano from the audit, and temporarily removed Mastriano’s Capitol office staff.

“We’re auditing the vote right now. Gov. Tom Wolf and Attorney General Josh Shapiro tried to stop me, but I beat them in court. On Election night 2020, I called for the resignation of Gov. Wolf’s Secretary of State, who was in charge of a clearly flawed election process,” Corman told The Epoch Times through an emailed quote provided by his campaign. “Gov. Wolf openly ignored state law by giving illegal, last-second directions to county voting offices on mail-in ballots. That’s why I’m pushing forward right now with the state Legislature’s constitutional responsibility to audit the 2020 election.”

The committee has a website with a detailed “Election Action Timeline” timeline starting before the election—August of 2020 to the present. It mentions Corman 13 times and has links to his materials. The timeline mentions Mastriano, not at all.

It is unclear whether the committee plans to order counties and the state to preserve the 2020 election records until the investigation concludes.

“The Senate Intergovernmental Operations Committee’s election integrity review is still active and ongoing. We are continuing to review information relevant to the investigation, but it is too early to tell at this time whether the retention schedule will come into play,” Corman spokesman Jason Thompson told The Epoch Times in an email. “Election reforms remain a top priority for Senator Corman, and he plans to introduce comprehensive election reforms to promote election integrity soon.”

Shuppe says that as president of the Senate, Corman was empowered to do something immediately after the election, and that Audit the Vote PA has never been able to talk with him.

“When the senator we were working with, who was championing the cause, was removed from his position and the entire plan was changed, there was no correspondence or explanation about that, or anything that showed [Corman] was trying to pick up the ball and really do the right thing and partner with the grassroots,” Shuppe said of Corman. “We emailed him, we called him, we sent him certified letters. We had his constituents, who are our volunteers, knock on his door at his local offices. I went to Harrisburg personally and tried to connect with him and knocked on his office door. He has literally never responded to anything we’ve ever done. Nothing.”

“I personally believe that Trump won Pennsylvania,” Shuppe said. “But since they won’t give us a real forensic audit, we’re not going to be able to prove that. What we can prove though, is that the anomalies, irregularities, and the voter rolls being inflated—all of those things point to the fact that the anomalies far, far outweigh the margin of victory, therefore the winner is inconclusive in Pennsylvania. I still think Pennsylvania should be decertified. Figuring out who legitimately won is like unscrambling an egg. You just, you can’t do it without getting your hands on the ballots, machines, outer envelopes, which they’re not going to do. We’re just never going to get that answer.  We need to safeguard 2022 and 2024 to make sure this can’t happen again.”