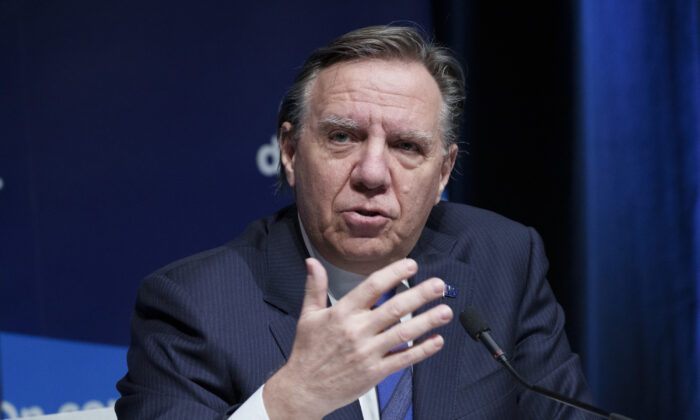 Quebec’s Tax on the Unvaccinated: Experts Weigh In on Possible Legal Challenges

A tax on the unvaccinated, as planned in Quebec, would be a violation of the charter, say some legal experts, while others say it’s not certain whether the courts would rule against the tax given the trend of rulings in recent challenges against pandemic policies.

On Jan. 11, Quebec Premier Francois Legault announced his intention to impose a new “health contribution” on the unvaccinated in the coming weeks. He didn’t specify the amount to be levied but said it would be “significant.”

John Carpay, president of the Justice Centre for Constitutional Freedoms, told The Epoch Times that such a tax is unconstitutional.

“It’s taking bad government policies and making them even worse. … You already had an announcement that you’re a second-class citizen unless you got three injections to keep your QR code current,” he said.

“The individual citizen is allowed to control what does or does not get injected into her. And so any government pressure, whether direct or indirect, is a violation of fundamental charter rights.”

The Justice Centre has had mixed success in pursuing constitutional challenges against government responses to the pandemic. In March 2021, a challenge in B.C. succeeded in restoring the right to outdoor protests but not to in-person religious gatherings.

Section 1 of the charter says the rights and freedoms guaranteed in the document can be curtailed only to the extent that they “can be demonstrably justified in a free and democratic society.” But when the Justice Centre challenged lockdown measures in Manitoba, Chief Justice Joyal upheld them.

He stated in his ruling that “determination of whether any limits on rights are constitutionally defensible … should be guided not only by the rigours of the existing legal tests, but as well, by a requisite judicial humility that comes from acknowledging that courts do not have the specialized expertise to casually second guess the decisions of public health officials.”

In announcing the new tax, Legault called it “shocking” that the unvaccinated occupy half of the intensive care unit beds in the province.

“Unfortunately, there is still a small minority, about 10 percent of the population, that refuses to get vaccinated. … I sense the frustration from Quebecers towards that minority that … is clogging our hospitals,” he said.

“All adults in Quebec who don’t accept to go get at least a first dose in the next few weeks will have a bill to pay because there are consequences on our health system and it’s not up to all Quebecers to pay for that.”

Section 15 of the charter does not list vaccinated status among protected grounds against discrimination. However, Carpay says the language and tone used by the premier and others are similar to what the charter endeavours to spare those groups.

Carpay explains that when the Charter of Rights and Freedoms was debated in the early 1980s by Prime Minister Pierre Trudeau and the premiers at the time, they excluded sexual orientation. Then in a landmark decision in 1995, the Supreme Court of Canada declared that sexual orientation was included within the charter as an analogous ground.

“Analogous grounds of discrimination that are not listed in the charter are still charter rights,” he said.

“So could you argue that vaccination status is akin to sexual orientation, and akin to numerous specifically mentioned grounds, such as race, religion and gender? That would be the legal question. I don’t have an opinion on whether that should be pursued or not, or whether it’s got a good chance of success or not.”

Carpay is more confident of a Section 7 challenge, related to the rights to life, liberty, and security of the person, but the decision rests with judges.

“The person challenging this new fee or fine would have a very strong case. … However, even with a strong case, it’s impossible to predict with any accuracy how a court would rule on the matter.”

Bruce Pardy, a law professor at Queen’s University, said the nuances of Quebec’s distinct Charter of Rights and Freedoms add another layer of considerations.

“It’s more complicated than it may look, and especially in the current COVID climate, the answer is not certain,” Pardy said by email.

“Is this a round-the-back way of interfering with patient autonomy in medical decisions? Or is this really, in pith and substance, a tax? If it is a tax, does the tax discriminate in a way that is unconstitutional? (That’s not clear.) What will be the penalties for failing to pay the tax? Does it amount to requiring unvaccinated people to pay for medical care, unlike others? These are just some of the questions that will come up.”

Lisa Bildy, a lawyer with Libertas Law in Ontario, says Quebec’s “new penalty” for the unvaccinated forces people to “take an invasive medical treatment,” which carries at least some personal risk and which “they don’t want or need, to assuage the fears of the majority.”

“The Supreme Court of Canada has previously held that state interference with bodily autonomy, and serious state-imposed psychological stress, constitute a breach of the security of the person under Section 7, particularly where there are criminal sanctions. There is little difference in substance between a punitive ‘tax’ and a fine imposed under the Criminal Code,” she told The Epoch Times.

“If someone refuses to or cannot pay, the full force of the state can be applied against them. Although most charter challenges against pandemic measures have failed, with the courts giving wide berth to governments to manage the pandemic as they see fit, there must be a line that even the courts won’t countenance governments crossing. Surely this is it.”