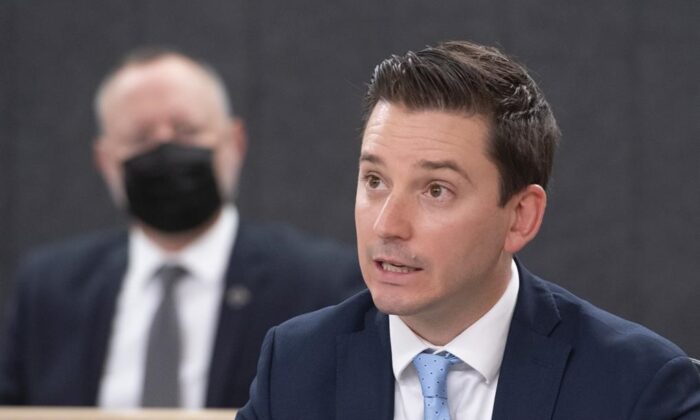 MONTREAL—Quebec’s proposed overhaul of its French-language charter is under the microscope at legislative hearings, with participants this week raising concerns about the bill’s effect on English speakers and the independence of the judiciary.

Tabled in May, Bill 96 is Quebec’s plan to upgrade Bill 101, the province’s French-language charter first adopted in 1977 by the government of René Lévesque.

Premier Francois Legault’s government has described its proposed reform as a reasonable response to studies by Quebec’s French-language office that indicate French is on the decline in the province, particularly in Montreal.

“The time has come to take strong action,” Simon Jolin-Barrette, the minister responsible for the French language, said at the outset of hearings.

The bill is still making its way through the legislative process but drew national attention during the English-language federal election debate. Moderator Shachi Kurl described Bill 96 as one of two “discriminatory” pieces of legislation in Quebec, the other being Bill 21, which bans some public sector workers from wearing religious symbols on the job.

Bill 96 seeks to unilaterally change the Canadian Constitution to affirm Quebec as a nation and French its official language. It also includes 200 amendments that aim to strengthen the status of French. They include a call for tougher sign laws, more language requirements for businesses and less access to English-language junior colleges.

The Legault government has invoked the Canadian Constitution’s notwithstanding clause to shield the bill from charter challenges.

The Quebec Community Groups Network, an umbrella organization representing English community organizations, called for the Legault government to withdraw the bill or at least remove the notwithstanding clause.

“Bill 96 proposes the most extensive overhaul to Quebec’s legal order since the Quiet Revolution,” Marlene Jennings, the network’s executive director, told the hearings. “A change of this magnitude requires serious discussions and debate within Quebec society.”

“I want to reassure the English-speaking community … this bill is for inclusion, to include every Quebecer in Quebec, that everybody is part of the society,” he said. “We are not taking any rights away from anybody in that bill.”

The network agreed that protecting the French language is important, but it disagreed that French was on the decline in the province. The group also called on the government to seek a reference from the Quebec Court of Appeal on the constitutionality and meaning of amending the Constitution.

The Quebec Bar Association told the hearings it was concerned the bill undermines the independence of the judiciary because it removes a requirement for judges in the province to be bilingual.

The association also took issue with a section of the bill that states the French−language version of laws would take precedence over the English−language translations, which it said could be a violation of the Constitution. Article 133 of the Constitution states federal and Quebec laws must be enacted in both languages, and that section does not fall under the notwithstanding clause.

For its part, the Conseil de Patronat, which represents Quebec employers, raised concerns about the impact of the bill on small businesses. Bill 96 forces companies with 25 employees or more—down from 50 employees—to operate in French, which creates more red tape for small firms.

And part of the bill would limit the ability of companies to require job applicants to speak a language other than French, something the employers’ council said doesn’t take into account the impact on companies that do business in the rest of Canada or internationally.

The responsibility falls on the businesses themselves, who must demonstrate they’ve taken “all reasonable means” to avoid requiring knowledge of a language other than French.

“This measure could also have the perverse effect of limiting the hiring of certain candidates, especially among marginalized populations,” the council said. “In a globalized economy like ours, speaking more than one language has added value and should not be penalized.”

Another point of contention is access to English−speaking junior colleges, known as CEGEPS. Language hardliners, such as the Société Saint−Jean−Baptiste, argue that access to those schools should be strictly limited and fall under the charter, which currently prohibits most francophones and immigrants from attending English−language primary and high schools.

The government has chosen a moderate approach, declining to extend the charter to junior colleges but introducing caps on the number of students who can attend.

Guy Rocher, an academic and sociologist and an architect of Bill 101, told the hearings the government had erred in 1977 by not including junior colleges in the original language law. Rocher, now 97, suggested the government at the time had no idea how important the junior college system would become.

The consultations continue until Oct. 7.