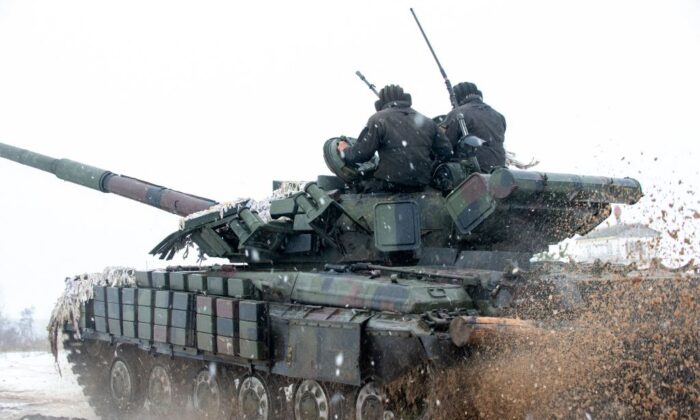 Ukrainian Military Forces servicemen of the 92nd mechanized brigade use tanks, self-propelled guns and other armored vehicles to conduct live-fire exercises near the town of Chuguev, in Kharkiv region, Ukraine, on Feb. 10, 2022. (Sergey Bobok/AFP via Getty Images)
Russia-Ukraine War

The Russian invasion of Ukraine, a major grain exporter, will raise food prices worldwide and worsen unrest in countries dependent on food imports.

Ukraine has some of the world’s most fertile soil.

Although America imports little Ukrainian food, the war in Ukraine, rising global fertilizer costs, and lower than expected grain yields in South America, will likely cause grain prices to rise by about 10 percent in the next year due to international market pressures, according to logistics expert Nathan Carson.

“Whether this war is a swift decapitation strike that Russia’s hoping for, or if it’s a prolonged fight, it is definitely going to impact spring planting,” he said.

The Russian invasion has both long-term and short-term impacts, said Arlan Suderman, the chief commodities expert for StoneX Group, a financial services business.

Right now, the fighting has closed the Black Sea, which is the main shipping lane for Eastern European grain export. Ship insurance companies have raised their rates to prohibitively high levels in response to the danger of missile strikes.

“We’ve had several ships that have been hit by missiles,” Suderman said. “There’s about 100 ships tied up at those Ukrainian ports, feeling like it’s unsafe to even try to leave the ports at this point.”

At least two ships have been fired upon, although it remains unclear which side was responsible.

Russia, Ukraine, and Romania combined are responsible for over 30 percent of world grain production, he said. Russia is also responsible for 25 percent of sunflower oil exports. If the war continues, it will be difficult for this grain to leave Europe.

“If that gets shut off in this conflict, then not only does that create problems with people heating their homes and running industries in Europe, that shuts off fertilizer production in Europe,” said Suderman. “Europe’s a major exporter of fertilizer. That further tightens a very tight supply of fertilizer you need to produce the crops this year around the world.”

The conflict will also have several long-term impacts, Suderman said.

Even if the war ended next week, Ukraine likely wouldn’t be able to plant any grain this year.

“Are the landowners going to be able to maintain ownership of their land?” asked Suderman. “Who would finance the inputs needed to put to plant the crop? Would they be able to find enough inputs to produce a crop? And even if the fighting stopped, could they trust Putin not to start it up again?”

The biggest impact on food prices won’t come from the food itself, he said. Food is cheap, but transportation is expensive.

“It’s the price of crude oil and natural gas that has the biggest impact on food prices going up,” Suderman said.

The impact of Putin’s war could still affect wheat markets up to two years from now, Suderman said. However, it’s far too early to tell what the future will hold.

The war could end this afternoon, he said. Or it could continue indefinitely.

“We don’t know the extent of the damage that is going to be done,” Suderman said. “I would anticipate we’re going to see significant damage done to Ukraine’s infrastructure. But that’s a guessing game at this point.”

One of the food-importing countries most impacted by disruption to Ukraine’s farms is China, Carson said.

“There’s some speculation that Putin might have tipped Xi Jinping off that something was going to go down and you may want to increase your corn reserves,” Carson said. “And what these early purchases do is it basically allows China to hedge against that inflation.”

Carson said that today’s food prices in the Middle East are already at the levels they reached during the Arab Spring revolutions.

“When you start jacking up food prices, you increase social unrest and social tension,” he said.

The National Association of Wheat Growers, a group of 20 state wheat-growing organizations, told The Epoch Times that it would continue to track the market volatility caused by the war between two of the world’s top wheat-producing nations.

The war will likely result in price increases of both grain and its key inputs, according to the association. Even before the conflict, American farmers faced supply chain issues and risking key input costs.

“While we have concerns about the market volatility, we are deeply concerned about geopolitical stability and the needless suffering happening in Ukraine at present,” the National Association of Wheat Growers said.