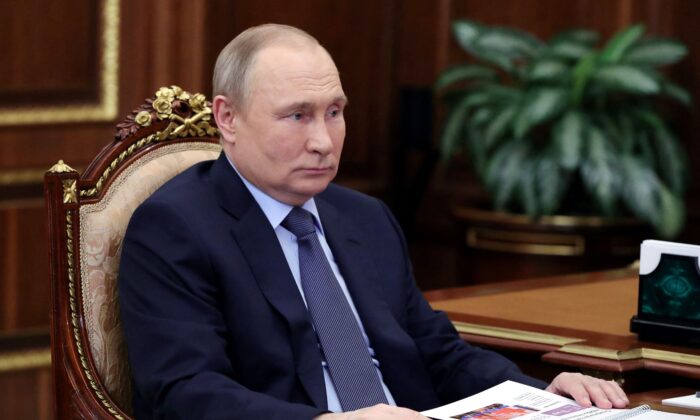 Russian President Vladimir Putin on Friday said that the Western world order is collapsing and that U.S. and EU sanctions against his government have failed.

“The previous world order is finished,” Putin said at the International Economic Forum in St. Petersburg.

Dismissing the sanctions as part of a “propaganda campaign,” Putin added, “What all these spells about 200-to-1 ruble-dollar exchange rates and claims that our economy would collapse were all about. All this was … and remains … a tool in the information warfare, an attempt to put psychological pressure on Russian society.”

“The European Union has completely lost its political sovereignty, and its bureaucratic elites are dancing to someone else’s tune, accepting whatever they are told from above, causing harm to their own population and their own economy,” he further remarked.

Putin’s address at the yearly conference represents one of his more substantial speeches since the start of the Ukraine conflict, which erupted on Feb. 24. Amid reports of losses during the months-long conflict in Ukraine, Putin said he believes Russia’s objectives will be met.

“All the objectives of the special military operation will be implemented, there’s no doubt about it,” he said.

Days after the invasion started, the United States, the European Union, and other Western nations imposed punishing sanctions against Moscow, with the United States suspending all Russian oil imports. The United States and its NATO allies have, meanwhile, sent military aid to Ukrainian fighters, including anti-tank weapons, anti-ship missiles, and long-range rocket artillery systems.

Putin has long said that the conflict with Ukraine was launched in response to decades of eastward NATO expansion as the Kyiv government, since 2014, has attempted to foster closer relations with the United States and NATO states. Following the 2014 color revolution, Russia annexed the Crimean Peninsula, and two regions in the eastern Donbass region fell under the control of Russian-backed separatists—leading to sporadic fighting before the February 2022 invasion.

“Their intention is clear to crush the Russian economy by breaking down the chain the logistical chains, freezing national assets and attacking the living standards, but they were not successful,” Putin said. “It has not worked out. Russian business people have rallied together working diligently, conscientiously, and step-by-step, we are normalizing the economic situation.”

The Russian president’s speech comes as the European Commission on Friday said it was recommending that Ukraine and its neighbor, Moldova, become European Union candidate states.  The move was praised by Ukrainian President Volodymyr Zelenskyy in a Twitter post.

Ursula von der Leyen, the head of the European Commission, said Ukraine is being considered because it has “clearly shown commitment to live up to European values and standards. And embarked, before the war, on its way towards the EU.”