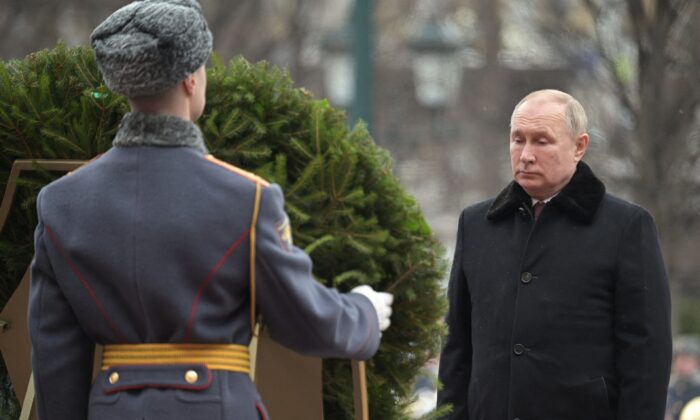 Russian President Vladimir Putin takes part in a wreath laying ceremony at the Tomb of the Unknown Soldier by the Kremlin Wall on the Defender of the Fatherland Day in Moscow, Russia Feb. 23, 2022. (Sputnik/Aleksey Nikolskyi/Kremlin via Reuters)
Russia-Ukraine War

“The President of Russia called on the European Union to make a real contribution to saving people’s lives, to put pressure on the Kyiv authorities and force them to respect humanitarian law,” the Kremlin said in a statement following a conversation between Putin and Charles Michel, the head of the EU’s European Council, according to state-run media.

Putin blamed Ukrainian nationalist forces for “various kinds of provocations,” including “violence against civilians” while trying to evacuate civilians from certain cities over the weekend.

The International Committee of the Red Cross (ICRC) appeared to confirm that evacuation efforts from Mariupol had failed, blaming both sides.

“Today’s attempt to start evacuating an estimated 200,000 people has failed. The failed attempts underscore the absence of a detailed and functioning agreement between parties to the conflict,” the ICRC wrote on Twitter. The Red Cross appeared to blame both sides for not coming to a clear agreement on the evacuation corridors.

“People in Mariupol and in other places across Ukraine are living in desperate situations,” the ICRC wrote in its Twitter thread before adding: “They must be protected at all times. They are not a target. People urgently need water, food, shelter. The basics of life. We need safety guarantees to be able to bring them aid.”

At the same time, on Monday, Russia announced yet another limited cease-fire and the establishment of safe corridors to allow civilians to flee some besieged Ukrainian cities. But the evacuation routes led mostly to Russia and its ally Belarus, drawing criticism from Ukraine’s government and others.

Ukrainian Deputy Prime Minister Irina Vereshchuk criticized the latest cease-fire proposal, which had most evacuation routes heading toward Russia or its ally Belarus, calling it “unacceptable.” Belarus has served as a Russian launching ground for the invasion.

“I don’t know many Ukrainians who want to seek refuge in Russia. That’s hypocrisy,” he said in an interview on French news broadcaster LCI.

Following the Feb. 24 invasion, Russia has mobilized about 100 percent of the forces that it had stationed for weeks along Ukraine’s borders, said a senior U.S. defense official on Monday. “That’s our best estimate right now,” the official said.

The Pentagon has also ordered another 500 American troops to Europe, which would bring the total number of American forces on the continent to about 100,000, said the U.S. official.