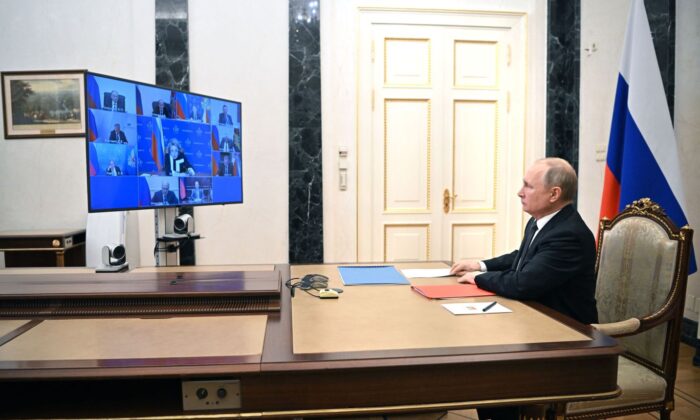 Russian President Vladimir Putin chairs a meeting with members of the Security Council via teleconference call at the Novo-Ogaryovo state residence outside Moscow, on Feb. 18, 2022. (Mikhail Klimentyev / Sputnik/AFP via Getty Images)
Russia-Ukraine War

Russian President Vladimir Putin on Monday said that Russia is not sending, and will not send, conscripts or reservists to fight in Ukraine.

“I emphasize that conscript soldiers are not participating in hostilities and will not participate in them. And there will be no additional call-up of reservists,” Putin said during a televised event for International Women’s Day.

Putin also said that the invasion of Ukraine is being carried out “by professional servicemen,” according to state-run media. “I am convinced they will reliably ensure security and peace for the people of Russia,” he added.

Since the start of the Feb. 24 conflict, there has been speculation that Russia is using conscripted soldiers, namely after Russia’s Committee of Soldiers’ Mothers claimed that some men were forced or pressured to sign contracts to become soldiers.

“Mothers are telling us that their sons have been calling them and saying they’re being forced to sign contracts. We believe it’s wrong to force a conscript to become a contract soldier,” Olga Larkina, the director of Russia’s Committee of Soldiers’ Mothers, told Russian media. “The parents who have gotten in touch have told us their sons were just taken by military officers, stamped, and that’s it—now they’re contract soldiers.”

Putin’s claim comes as Ukrainian President Volodymyr Zelensky called Tuesday for the expansion of humanitarian corridors, and more support from the Red Cross.

In a video address from an undisclosed location, he said a child died of dehydration in Mariupol, in a sign of how desperate the city’s population has become. He said there was no firm agreement on the route out of Mariupol, so “Russian troops can simply shoot on this transport on the way.”

Zelensky then accused the International Red Cross of “forbidding the use of its emblem on our cars,” but did not give details. Videos of buses heading out of Sumy and toward Mariupol have had signs with a red cross on the side but it’s not clear who pasted them there.

The president again pleaded for air support from Western countries. On Monday, Polish officials indicated that they will not provide fighter planes to Ukraine, while the United States and NATO have said that enforcing a no-fly zone over Ukraine is a nonstarter.

On Monday, Moscow again announced a series of demands to stop the invasion, including that Ukraine recognize Crimea as part of Russia and recognize the eastern regions controlled by Moscow-supported separatist fighters as independent. It also insisted that Ukraine change its constitution to guarantee it won’t join international bodies like NATO and the EU.