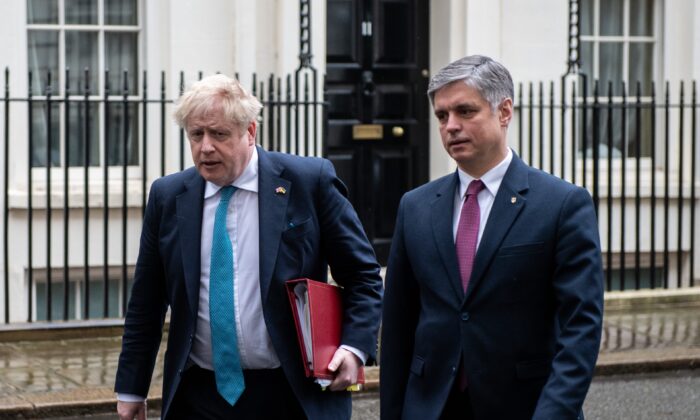 At the Prime Minister’s Questions in the House of Commons on March 2, Johnson said, “What we have seen already from Vladimir Putin’s regime in the use of the munitions that they have already been dropping on innocent civilians, in my view, already fully qualifies as a war crime.”

He said the chief prosecutor of the International Criminal Court (ICC) is already investigating events in Ukraine and, “I am sure the whole House will support that.”

“In his abhorrent assault on a sovereign nation, he has underestimated the extraordinary fortitude of the Ukrainian people and the unity and resolve of the free world in standing up to his barbarism.”

Later, a Downing Street spokesman told reporters, “No one can be in any doubt that what we’re seeing daily, almost hourly now, are horrific acts that would certainly appear to be war crimes.”

The spokesman confirmed it was the first time Number 10 had explicitly stated that view.

A Downing Street spokeswoman said Johnson condemned the “abhorrent attacks on Ukraine in the recent hours and days.”

“Sharing his disgust at the attacks on Ukraine, the prime minister said the UK was doing everything possible to support the Ukrainian people and their resistance,” she said.

UK government officials fear the Russian leader will unleash even greater force against Kyiv and other Ukrainian cities in the coming days.

According to the latest intelligence update from Britain’s Ministry of Defence, “heavy Russian artillery and air strikes have continued to target built-up areas,” primarily focused on the cities of Kharkiv, Kyiv, Mariupol, and Chernihiv.

Talking to “BBC Breakfast,” UK Defence Secretary Ben Wallace said Putin “seems to know no limit to how much violence” he is prepared to use to achieve his aims.

“That’s one of the Russian doctrines, which is effectively surround a city, bombard it indiscriminately, and then eventually close in on a population that they hope to have broken, and indeed take over what’s left of the city,” he said.

Wallace warned that an occupying force would face the kind of insurgency faced by the Soviets in Afghanistan or the West in Iraq.

“Invading a country with overwhelming force is one thing, occupying a people of 44 million who don’t want you in it is a very different thing.”