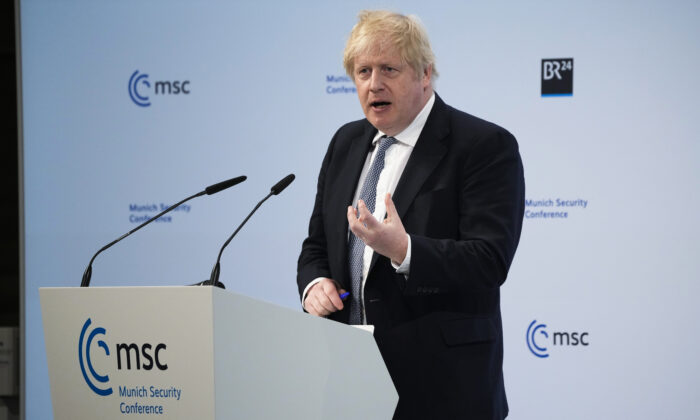 Putin Could Be Planning ‘Biggest War in Europe’ Since WWII: Boris Johnson

Intelligence suggests that Kremlin could be planning “the biggest war in Europe since 1945,” the UK’s Prime Minister Boris Johnson said on Feb. 19.

In an interview with the BBC in Munich, Johnson said a Russian invasion doesn’t just seem imminent, but “all the signs are that the plan has already in some senses begun.”

But in a separate interview on the same day, he stressed that only Russian President Vladimir Putin knows what his agenda is, and said that there’s “still time for wiser counsel, still time for common sense to win.”

Russia has stationed more than 100,000 troops along its border with Ukraine for about a month, but Moscow has repeatedly denied accusations that it plans to invade its southern neighbor, claiming that its the troops are carrying out planned exercises while threatening unspecified “military-technical measures” if Washington continues to ignore its demands for NATO.

U.S. officials have said that the number of Russian troops has grown to more than 190,000 in recent days.

In a clip of a long interview that’s due to air on Monday, Johnson told to the BBC that intelligence suggests that Russia is not planning ” just an invasion through the east, through the Donbass [region],” but also “coming down from the north, down from Belarus, and actually encircling Kyiv itself, as [U.S. President] Joe Biden explained to a lot of us last night.”

Johnson said the plan he saw is “for something that could be really the biggest war in Europe since 1945, just in terms of sheer scale.”

“The fact is that all the signs are that the plan has already in some senses begun,” he added.

“I think people need to understand the sheer cost in human life that could entail—not just for Ukrainians—but also for the Russians,” Johnson said, in an apparent effort to deter any plans of invasion.

In a pooled interview earlier, the prime minister told reporters that the situation in Donbass is exactly the kind of provocation expected to happen, and it “could well be the prelude to bigger action.”

Biden on Friday said that U.S. intelligence officials believe Russia will invade Ukraine in the coming days and will target its capital, Kyiv, while some others envisage the prospect of a protracted standoff.

Asked if he believes Putin is playing a longer game, Johnson said only Putin knows the answer.

“There are two schools of thought, and you will have heard what President Biden has had to say. As I said to you just now, only one person really knows what his agenda is,” he said, referring to Putin.

“If there’s still a path for diplomacy, for negotiation, then let’s go down it.”

Johnson said he “certainly” believed that things are already in motion, but there remains the possibility that Putin will “call this operation off.”

“I think that possibility must logically still exist, and therefore I think it’s absolutely vital that we have a path of dialogue, of reason,” he said.

“You know, you just cannot see how this makes sense for Russia. Imagine the invasion of Ukraine, a country of 45 million people, the second biggest country in Europe geographically apart from Russia itself—an absolutely colossal place.

“You can’t hold it down. There will be a protracted, violent, bloody insurgency with the loss of life for young Russians, as well as for Ukrainians,” he said.

On whether NATO forces will enter Ukraine to defend it in the event of a Russian invasion, Johnson said such a security guarantee is only guaranteed for NATO members under Article 5 of the alliance’s treaty, although the United Kingdom stands ready to do everything else it can.

“Ukraine is not a member of NATO but we certainly believe that Ukraine is a sovereign, free, independent, democratic country. And what we want to do is do everything we can—short of that Article 5 guarantee, because that doesn’t exist—to support the Ukrainians.”

The measures will include “a very, very tough package of economic sanctions, cracking down on Russian money, trying to move away from dependence on Russian hydrocarbons,” and “fortifying the eastern perimeter of NATO,” Johnson said, “so that it’s clear to Putin that if he thinks that by doing this, he can push NATO back, then he’s wrong. What he’s going to get is not less NATO, it’s more NATO.”

Moscow has asked the United States and its allies for a binding commitment that they won’t accept Ukraine into NATO. Russia also wants the alliance to halt weapons deployments to Ukraine and roll back its forces from Eastern Europe.

But Washington and NATO have rejected those demands.

NATO’s Secretary-General Jens Stoltenberg said on Tuesday that NATO’s door “remains open” to Ukraine and that the alliance “strongly believe[s] that all nations have the right to choose their own path.”

Read More
Beijing Should Be Put on Notice: A War With Russia Is a War With China
Xi and Putin Announce ‘No Limits’ Partnership Amid Deepening Standoff With West
Jack Phillips, Tom Ozimek, and PA contributed to this report.