Putin Calls on Countries to Normalize Relations With Russia 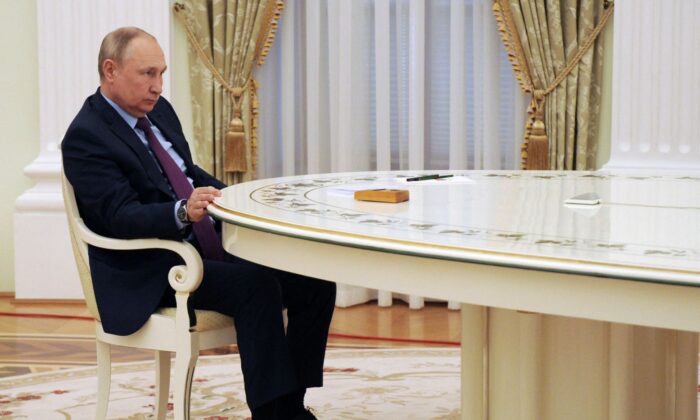 Russian President Vladimir Putin attends a meeting with his Azerbaijani counterpart at the Kremlin in Moscow on February 22, 2022. (Mikhail Klimentyev/Sputnik/AFP via Getty Images)
By Jack Phillips

Russian President Vladimir Putin said that Western and other countries should normalize relations with his country following punishing sanctions over the invasion of Ukraine.

“We have no bad intentions, there is no need to escalate the situation, impose restrictions, we fulfill all obligations,” Putin said during an event on Friday, according to state media. “If someone does not want to cooperate with us within the framework of single cooperation, and by doing so harms themselves, they will, of course, harm us too,” Putin said.

Following the start of conflict in Ukraine on Feb. 24, the United States, European Union, Japan, and several other countries issued hefty sanctions against Putin, Russian oligarchs, the Russian Central Bank, other Russian banks, and other assets. A number of international corporations, including Maersk, Boeing, Microsoft, Apple, and others, have also said they won’t do business in the country.

Responding to the sanctions, Putin said the country’s economy would have to adapt.

The United States, United Kingdom, and the European Union also announced they would expel certain Russian banks from SWIFT, the high-security banking network for thousands of financial institutions, prompting speculation that Russia would turn to China and the yuan in a bid to evade sanctions. The Chinese Communist Party has not hit Russia or any of its assets with sanctions.

In recent days, meanwhile, some European and American companies signaled they are pulling out of Russia and won’t be making any investments in the near future. That includes oil giants ExxonMobil, Shell, and BP.

Russian First Deputy Prime Minister Andrei Belousov elaborated on the government’s position on Western companies that do business in Russia. On Thursday, French bank Societe Generale said that Russian authorities could seize its assets in the country.

“The company continues to work fully in Russia,” Belousov said in a statement, according to Reuters. “Foreign shareholders transfer their share to be managed by Russian partners and can return to the market later,” he added, saying: “The company permanently terminates operations in Russia, closes production, and dismisses employees.”

Earlier this week, Putin told state media that the invasion in Ukraine is going as planned amid speculation that Russian troops are bogged down and unable to make advances on certain fronts.

Putin also said that he “will never give up on [the] conviction that Russians and Ukrainians are one people.”