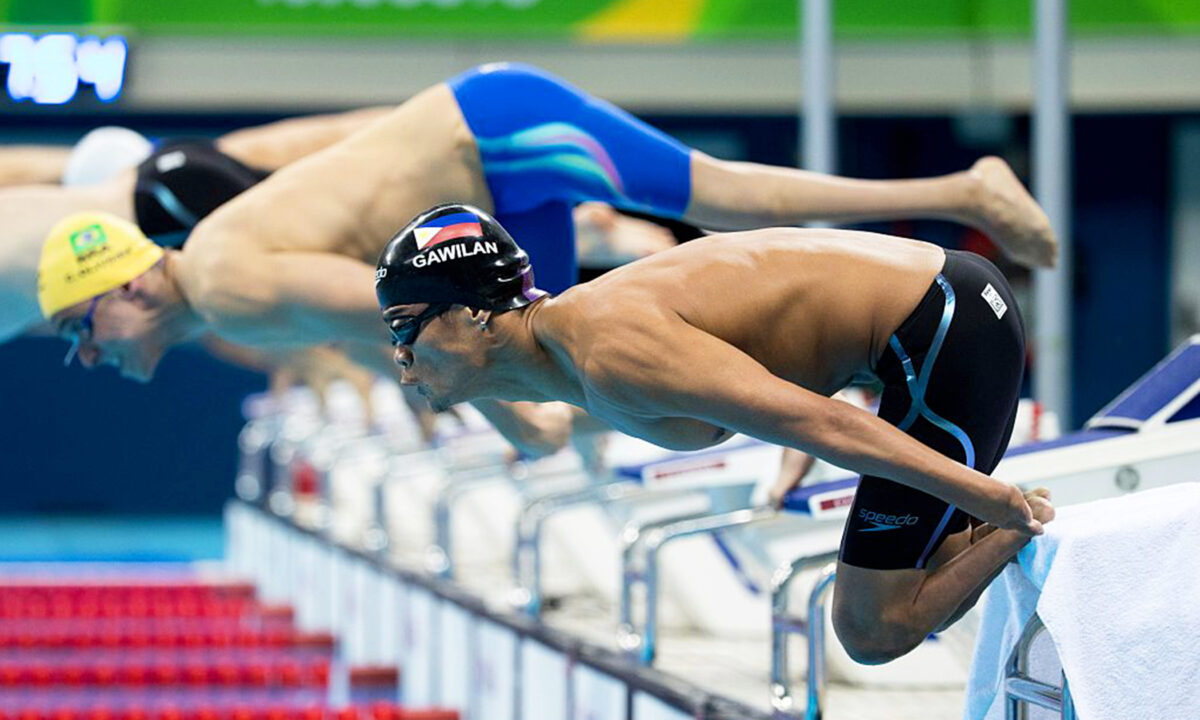 Ernie Gawilan at the start of Heat 2 of the Men's 100m Freestyle - S8 at the Olympic Aquatics Stadium during the Paralympic Games in Rio de Janeiro, Brazil, on Sept. 11, 2016. (Simon Bruty for OIS/IOC/AFP via Getty Images)
Inspired

'I feel sorry for the babies being aborted because it's a pity when they become victims.'
BY Louise Chambers TIMEJanuary 23, 2022 PRINT

A Filipino man born with an underdeveloped arm and legs found his passion in the weightless ocean and went on to become an international swimming champion. Yet, it wasn’t his first experience of overcoming adversity.

Thirty-year-old Ernie Gawilan, of Island Garden City in the Samal Davao region of the Philippines, survived an attempted abortion.

“I don’t have fingers on my left hand, and I don’t have feet,” Ernie told The Epoch Times. “Sometimes I get hurt because I’m always bullied, but now I can use my disability to show that disability is not an obstacle to [achieving] the impossible.”

Ernie said that his mother, a married woman, sought an abortion after falling pregnant by another man; the attempt to terminate the pregnancy wasn’t successful, and he was born in rural Mindanao.

However, his father abandoned the family after learning the truth. Later, Ernie’s mother died of cholera when he was just 5 months old.

“At first, I didn’t know where my life was going because of my disability,” he said, “but thank the Lord, because he didn’t leave me alone. My grandmother took care of me.”

When Ernie was 9 years old, he was spotted by businessman Vicente Ferrazzini, who persuaded the boy’s grandparents to send him to a center for disabled children in Davao City, reported the Philippines’s SPIN.ph. Under the care of the Maryknoll Sisters of St. Dominic at Our Lady of Victory Training Center, Ernie discovered the ocean and his love for the sport of swimming, in which his physical difference didn’t matter.

His determination made a name for him at the 2008 Philippine Olympic Festival in Cagayan de Oro City when he forgot his swimming trunks, but begged officials to allow him to compete in cargo pants instead. He resisted the drag of the heavy fabric to finish in second place.

To date, he has taken part in the Asian Paralympic Games five times and is a two-time champion.

Ernie became the first Filipino gold medalist in swimming at the 2018 Asian Paralympic Games. Competing at the 2021 Paralympics in Tokyo, he carried his country’s flag in the closing ceremony. “My inspiration is my grandparents because they raised me when my mama and papa were gone,” he said.

After being a swimmer for almost 18 years, Ernie says the most difficult aspect of the lifestyle is the training. “But you must be physically and mentally fit to overcome the challenges of life,” he insists.

Today, Ernie has over a dozen international medals to his name. He was even the eponymous star of a 2017 short film, “Gawilan,” and campaigns for equality in remuneration for disabled athletes.

Talking about abortion, he said: “I feel sorry for the babies being aborted, because it’s a pity when they become victims. It’s hard that I was deprived of being normal. If not for sport, I’m not sure what I would do.

“There is always hope in life, as long as we live. I have faith in God; put God first, before anything else.

“Just trust in God and in your own ability, and always be positive in your perspective, because not all days are difficult. The days and seasons are different.”