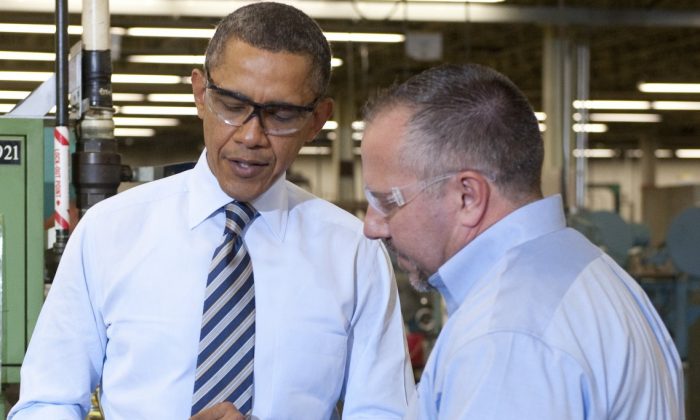 Pushing for More ‘Made in America’

Memories of a sweat-laden high school locker room were recalled by President Barack Obama as he toured Master Lock, a padlock and security product company, in Milwaukee on Feb. 15. During the visit, he praised Master Lock for shuttering its manufacturing operations in China and moving more jobs to America.

Master Lock said in a statement it had brought 100 union jobs back to America since mid-2010 and the decision was partially motivated by “increasingly higher labor and logistics costs in Asia, and further, ongoing labor availability challenges especially in the coastal areas of China.”

John Heppner, the company’s president and CEO, said more jobs would move back to America “should the underlying economics support the move.”

Terry Clower, director of the Center for Economic Development and Research at the University of Northern Texas, said there is a balance between global operations and creating jobs in the United States.

“You can’t make decisions purely on headline cost numbers. Just because you can go to certain countries overseas and get workers do a similar job for half the labor rate of what you would get here, it doesn’t mean that the total savings is that much,” Clower said.

There are many reasons and efficiencies that come into play when looking at the total costs, he said.

“It’s a good thing to have the jobs coming back,” he added.

Several other companies are expanding their manufacturing base in the United States, Caterpillar, a large construction and mining equipment manufacturer, has shifted its production of excavators from Japan to Athens, Ga. “The decision to shift production from Japan to the United States is driven by the proximity to a large base of customers in North America and Europe,” said Mary Bell, vice president of the company’s Building Construction Products (BCP) Division, in a statement. “Our objective is to better serve those customers from this new factory.”

Production is to begin in late 2013 and the facility will create more than 4,200 jobs, according to the statement.

The manufacturing operation is expected to boost the local and regional economy. “Based on the production capacity of the new plant, I estimate the total economic impact to reach $2.4 billion per year as key suppliers locate in the region and the regional supply chain matures,” said Dr. Sharon Younger, president of Younger Associates research firm and faculty member of the Economic Development Institute, in a statement.

Earlier this month, Japanese automaker Honda Motor Company announced a $98 million investment in its largest auto engine plant in Anna, Ohio. Honda has invested nearly $800 million in new operations in America since 2011. Honda’s investments are sustaining over 1,200 new jobs in Ohio, Alabama, and Indiana according to the White House.

Machine parts manufacturer, Diamond Precision Products, buys its components from local suppliers instead of China, saving money in shipping and increasing its ability to deliver orders quickly. The company was able to double its workforce in the past two years, and continues to grow, a White House statement said.

Obama is pushing several initiatives to shift overseas manufacturing jobs back to the United States. In his Blueprint for an America Built to Last plan he proposes a policy that ends tax deductions for shipping jobs overseas, and gives a 20 percent tax credit to “help companies bring jobs home.”

The president also said a Fair Trade Enforcement Unit, will be created to “investigate unfair trade practices in countries like China.”

“When we’ve got an even playing field, I promise you, nobody is going to out-compete America,” he said. “Give us a level playing field—we will not lose.”