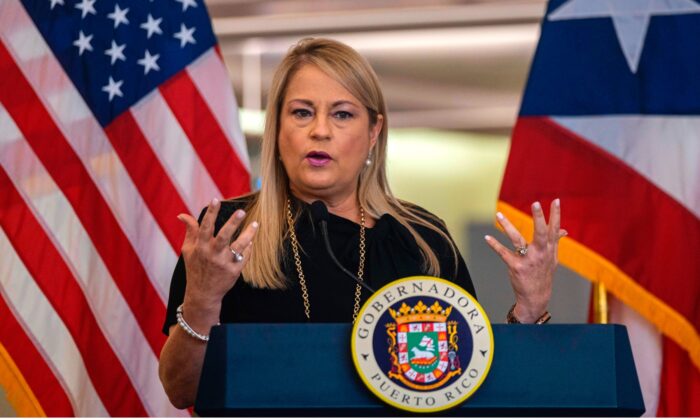 The former governor of Puerto Rico was arrested Thursday in San Juan on bribery charges related to the alleged financing of her 2020 reelection campaign, the Department of Justice (DOJ) announced.

Wanda Vázquez Garced, a member of the pro-statehood New Progressive Party who had previously promised to fight corruption, was scheduled to appear in federal court on Aug. 4 in Puerto Rico.

“I am innocent. I have not committed any crime,” she told reporters on Thursday. “I assure you that they have committed a great injustice against me.”

Vázquez Garced is accused of accepting campaign services worth over $300,000 from the head of an international bank in exchange for firing the head of a regulatory office that was investigating the bank.

She was serving as governor at the time and was running for reelection when she allegedly accepted the bribe.

According to the indictment, Vázquez Garced engaged in the alleged bribery scheme from December 2019 through June 2020 when she was serving as governor and running for reelection. Four other people were allegedly involved:

Julio Martin Herrera Velutini, 50, owned an international bank operating in San Juan at the time, and Frances Diaz, also 50, was the president and CEO of the same bank. Mark Rossini, 60, was a former FBI special agent who provided consulting services to Herrera Velutini, and John Blakeman, 53, was a political consultant who worked on Vázquez Garced’s 2020 reelection campaign.

‘Accepted the Offer of a Bribe’

The indictment alleges that starting in 2019, Herrera Velutini’s bank became the subject of an examination by Puerto Rico’s Office of the Commissioner of Financial Institutions (OCIF), a regulatory agency that oversees financial institutions operating in Puerto Rico.

Prosecutors say Herrera Velutini and Rossini promised to finance Vázquez Garced’s 2020 gubernatorial campaign if she agreed that she would appoint a new commissioner of Herrera Velutini’s choosing to take over the regulatory agency.

Vázquez Garced allegedly “accepted the offer of a bribe” and, in February 2020, demanded the resignation of the head of the regulatory agency and then appointed a new director a few months later in May.

The new head was a former consultant for Herrera Velutini’s bank.

If convicted on all counts, they face a maximum penalty of 20 years in prison.

After Vázquez Garced lost her reelection campaign, Herrera Velutini allegedly tried to bribe her successor, the new governor, identified in the indictment as “public official A.”

In March, Diaz and Blakeman both pleaded guilty to conspiring with Herrera Velutini and others in the attempted bribery of the new governor. The supposed representative of “public official A” was actually working for the FBI.

Both Diaz and Blakeman face up to five years in prison. Their sentencing hearings have not yet been scheduled.

In a written statement included in the announcement of the indictments, Assistant Attorney General Kenneth A. Polite Jr. of the Justice Department’s criminal division said the alleged bribery scheme “rose to the highest levels of Puerto Rican government” and threatened public trust in the election process and in government institutions.

“The Department of Justice is committed to holding accountable those who wrongly believe there is one rule of law for the powerful and another for the powerless,” Polite said. “No one is above the rule of law.”

Vázquez Garced is the first former governor to face federal charges. Former Gov. Aníbal Acevedo Vilá was charged with campaign finance violations while in office but was found not guilty in 2009.

Stephen Muldrow, U.S. attorney for Puerto Rico, told NPR that Pierluisi is not involved in the case.

Pierluisi issued a statement on Thursday vowing to work with federal authorities to help fight corruption on the island.

“No one is above the law in Puerto Rico,” he said. “Faced with this news that certainly affects and lacerates the confidence of our people, I reiterate that in my administration, we will continue to have a common front with federal authorities against anyone who commits an improper act, no matter where it comes from or who it may implicate.”