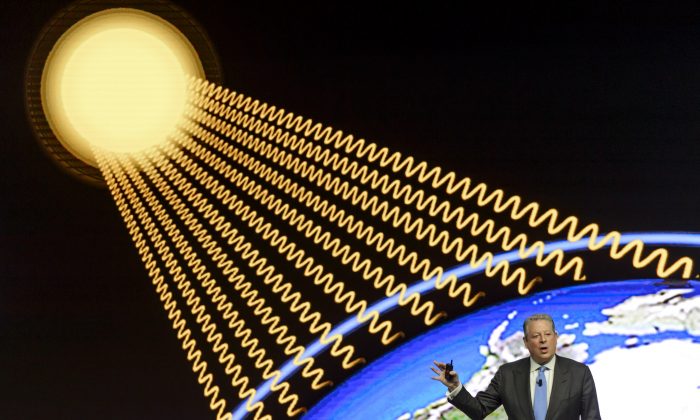 In 2012 the IPCC said that a relationship between global warming and wildfires, rainfall, storms, hurricanes, and other extreme weather events has not been demonstrated. In its latest assessment report (2013), IPCC scientists concluded that they had only “low confidence” that “damaging increases will occur in either drought or tropical cyclone activity” as a result of global warming.

The 2013 NIPCC report concluded the same, asserting, “In no case has a convincing relationship been established between warming over the past 100 years and increases in any of these extreme events.”

The NIPCC report “Summary for Policymakers” addressed drought as follows, “Observations from across the planet demonstrate droughts have not become more extreme or erratic in response to global warming. In most cases, the worst droughts in recorded meteorological history were much milder than droughts that occurred periodically during much colder times.”

That there is no trend toward increasing extreme weather is clearly evident in the data. The National Climate Data Center (NCDC) tracks state records for maximum and minimum temperature, precipitation, snowfall, and snow depth, and sometimes hail characteristics, for each of the 50 states, a total of 346 state records since the 1890s. The NCDC records reveal that no extreme weather state records have been set in 2015. Only one was set in 2014, one in 2013, one in 2012, four in 2011. By far the majority of state records were set well before late 20th century warming. For example, New York state’s extreme weather records are spread over the past century, with no recent increase. Here are New York’s records:

Scientists understand that global warming leads to less, not more, extreme weather. The boundary between cold polar air and warmer tropical air marks the position of the polar front. Extreme storms with winter blizzards and heavy rain in spring and fall, including tornadoes and hailstorms, form along the front. The number and intensity of extreme weather events varies with the temperature difference across the front, a parameter referred to as the zonal index.

According to the climate models the IPCC holds dear, global warming will occur fastest in polar regions, thus reducing the zonal index and so also reducing extreme weather.

As documented in climate records—proxy indicators, written records, and the brief instrumental record—extreme weather events have always been with us. For example, British surveyor and explorer Peter Fidler’s “Red River District Report 1819” notes, “The spring months have sometimes storms of wind and thunder even so early as March within these last years the Climate seems to be greatly changed the summer so backward with very little rain and even snow in winter much less than usual and the ground parched that all summer have entirely dried up …”

If governments truly want to help farmers and others “who live off the land,” they should be preparing for the far more dangerous threat to North American agriculture—cooling.

Contrary to official records, observational evidence from around the world indicates that we are in a period of cooling almost certainly caused by solar changes. This is expected to continue posing a serious threat to prairie agriculture. Canada, the breadbasket of much of the world, is especially at risk. Fifty percent of Manitoba’s crops cannot be grown with a 0.9 degree F overall temperature drop and much of Canadian agriculture is eliminated entirely by a 1.8 degrees of Fahrenheit cooling. It’s a trend made more threatening because governments, misled by decades of corrupted, predetermined science, plan only for warming.

Based on the false premise that there has been an increase in extreme weather caused by global warming, President Barack Obama wants to replace coal, America’s cheapest and most plentiful power source, with other more expensive fuels. It is of concern to all democratic nations when the world’s primary defender of freedom is bent on crippling itself in this way.

Instead of wasting money vainly trying to stop extreme weather from happening, governments should work to harden their societies to these inevitable events by burying electrical cables underground, and reinforcing buildings and other infrastructure. After all, Manhattan businesses that did not lose communications and power during Hurricane Sandy had their cables buried underground.

Yet, according to Climate Policy Initiative, of the almost $1 billion spent globally every day on climate finance, only about 7 percent of it goes to helping people adapt to climate change. This is the real climate crisis that should concern our leaders.